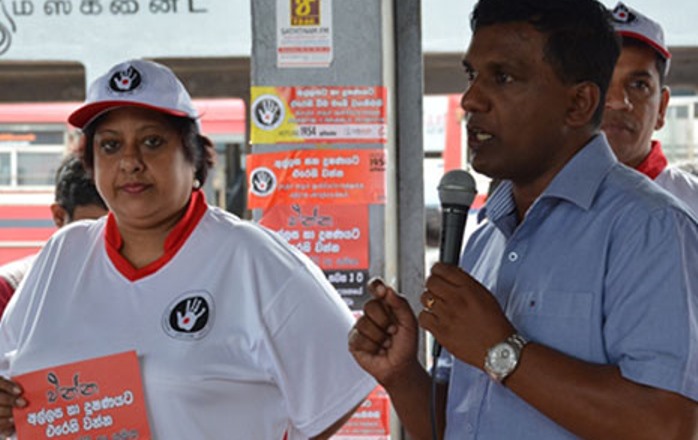 Resignation of Dilrukshi Dias Wickramasinghe, DG, Bribaary Commission and After.

There was a time when we believed that history had entrusted two Sri Lankans, Maithripala Sirisena and, with important roles.

One symbolized the aspirations for good governance while the other represented our desire to rid the nation of bribery and corruption.

But now,it seems that one incident has diminished them both and there are those who wish to see one or both relegated as relics of our political history.

The forces which stood behind both Sirisena and Wickramasinghe are now uneasy on where they stand. After the election of Sirisena, which was a surprise to some although not to us, there arose the need for a figurehead for the battle against corruption. And Wickramasinghe was entrusted with the job and we stood with her and ACF and CaFFE were two of the first few organizations which worked with Wickramasinghe’s bribery commission. I told her once that Sri Lankans think of her as Chandi Shyama, a character in a Sinhala cinema that symbolized toughness against injustice. An ardent fan of old school Sinhala movies, Wickramasinghe knew who Chandi Shyama was.

Now Chandi Shyama has sent her resignation letter to the President.

A few minutes after President Sirisena made the controversial speech at the Foundation Institute, criticizing the commissions appointed by the 19th amendment, I forwarded her a link to the video and told her that she is right in the middle of this controversy.  Wickramasinghe  was out of the country and she was slow to realize the gravity of the situation. After two lengthy phone conversations on 13 October, she texted me ‘I just realized what you said only now. OMG’.

What has led us all here is a complicated story of political maneuvering and intrigue, which needs to be told.

After President made his controversial speech, there were moves, explicit and implicit, pushing her towards handing over her resignation. Although I advised her not to, I was also keenly aware that, by the time she handed over her resignation, she felt as if she had no other option. The biggest and main allegation against her is that the Bribery Commission charged those alleged of irregularities at Avant Garde Maritime Company with ‘attempts of bribery’ instead of charging them using the firearms ordinance.

The second allegation is that she has failed to properly investigate the two treasury bond scams, the biggest alleged financial irregularity under the UNFGG government.

Meeting between President and Prime Minister

During the meeting between President Sirisena and Prime Minister Ranil Wickremesinghe last week, a number of issues including the unsystematic and random corruption investigations, perplexing choices and the lack of transparency was discussed. It was obvious that the lack of a process and procedure has created a serious crisis. When the power of selecting what cases should be investigated is given to a single person, there is a possibility that he or she would lose sight of the political sensitivity of the decisions taken.

As I have mentioned earlier I don’t think the President should have openly criticized the commissions. That was a mistake on his part. My attempt here is only to illustrate the events which led to this outcome.

ACF has lodged 225 complaints with the Bribery Commission. This is the highest number of complaints lodged by one organization. On December 28, 2015 we were informed of the progress made on 94 of those cases. However in the last 10 months, we were only informed the progress of three cases only. Baffled by this development, we wrote to the Commission on three separate occasions, 23 March 2016, 2 June 2016 and 20 July 2016 to find the latest on the complaints we lodged. Our letters were unanswered.

We were also angered by what happened to one of the key witnesses to the case against former presidential aid Gamini Senarath. This important witness was tortured by the police and ACF had to intervene to assure his safety. ACF has filed 225 cases and there are hundreds of witnesses to these cases. How were we to assure the safety of these men and women who were shaken by what happened? We then had to turn, once again, to the people and hope that they would shield us. But not everyone could do that.

Investigations with a process or procedure

The fact  that there were no processes or procedures when it came to determining what complaints should be given priority to, allowed some to handpick cases and ignore others. It was obvious for most that some of the most politically sensitive cases were handled with a certain bias. None of the cases we considered important were even considered worthy of preliminary investigations. Thus ACF did not submit a single complaint from 1 march to 23 September 2015. (On 23 September we submitted 14 cases along with the irregularities regarding the purchase of coal. I never expected the coal case to be ven considered.

Below are the complaints, that everyone considered important, except the commission.

Let me illustrate the the unsystematic nature of the investigations with one example. ACF has lodged complaints of irregularities at Lak Sathosa on 28 December 2015 and 10 April 2015. The complaints hinted, and our allegations were later proven by investigations by Auditor General, that irregularities amounting to Rs 18 billion has taken place at the institution. However without taking these complaints, the commission charged former Chairman of Lak Sathosa Nalin Fernando over non payment of Rs 19 200  for a vehicle he had hired. The complete loss for the institution by the actions of Fernnado was Rs 31 000. He was arrested and remanded for a week. But the cases that allege that Rs 18 billion has been misused have not been taken up.

There are a number of allegations against former presidential aid Gamini Senarath and former minister Mahindananda Aluthgamage regarding their assets. If the main criteria for selecting what cases should be investigated first, is the scale of the irregularity allegations against Senarath should have been taken up first. But he has not been subjected to such inspection. A senior SLFPer told me that a case against Aluthgamage was only filed after he held discussions with a group that are linked to the President. I am not sure whether its a coincidence or not, but anyone can see that its easy to give apolitical spin to what transpired. (Note – I have no objection of filing a case on the carom boards as it should have been done).

On 17 October, the Police Financial Crimes Investigation Division arrested Nadeshan. Except for the ACF no other organization continuously agitated for such. The media maintained a policy of silence on even his name. Yet, within hours of his arrest, he was granted bail. We had previously uncovered that a critical factor in this crisis involved Nadeshan and we were surprised that he was not questioned with regard to the land in Malwana.

Before the President made his contraversial, and unnecessary, speech, he has not once attempted to intervene in the affairs of the Bribery Commission. It is also true that she never kept the President upto date on the work they are doing as she considered that was how an ‘independant’ commission shoudl eb have. However she maintained a dialogue about thier investigations with the Prime Minister’s camp (note – not with Ranil Wickremesinghe personally).

On the other hand, the gap between the CIABOC and the media expanded. No one knew what she was up to and there was no means of providing information to the media.

Social expectations have collapsed with the resignation of Dias Wickramasinghe, a figure much loved by a majority of the people in this country and upon the institution which she represented, upon which much hopes were hinged on. In particular, there is much disillusion among the employees of the CIABOC. They served out of their own volition and accord and they liked working there. They were committed and dedicated. They were satisfied working there. On the other hand, the investments made regarding their future were immense. The preparation of school syllabuses, working with Provincial Government bodies, and work towards the prevention of bribery taking place, were some of the main such investments. All of this will definitely be undermined at least temporarily.

The President possesses no powers to intervene in independent commissions. Such should never be the case. But is is also not an exaggeration to say that the bribery commission acted sitting on an ivory tower, ignoring the political realities on the ground. Unfortunately that is how the police and public service commissions behave as well.

Yet, it is a responsibility of the independent commissions to prepare procedures, processes and systems to prevent such allegations from being leveled by the Executive or from any other faction of the Executive.

However, if such does not take place, and as long as officials are allowed free reign to select investigations as per one’s whim and fancy, the political leadership will have room to revolt against such.
-Rajith Keerthi Tennakoon is the Executive Director of CaFFE and CHR-Sri Lanka