In Sri Lanka, Muslims say Sinhala neighbours turned against them 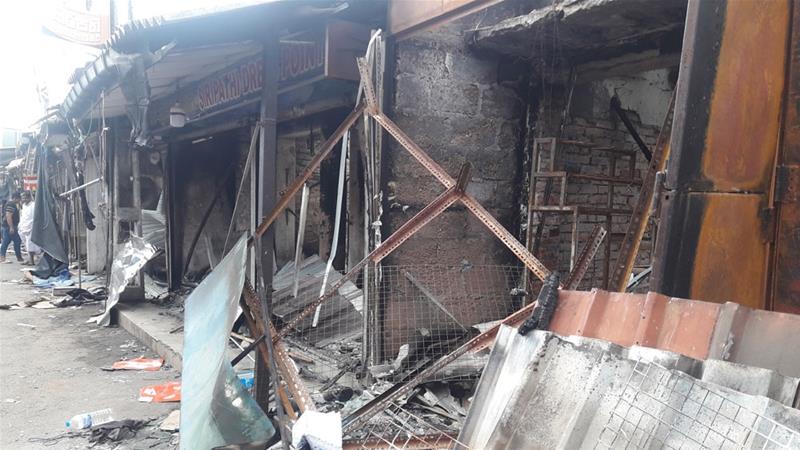 Image: The central market in Minuwangoda in western Sri Lanka following the riots on May 13 [Rukshana Rizwie/Al Jazeera]

Muslims live in fear after wave of attacks is blamed on Buddhist hardliners in the wake of Easter Sunday bombings.

Kottaramulla, Sri Lanka – The stench of turpentine overpowered Jiffriya Ameer as she cradled her husband against her lap on the front porch of her home and watched the blood drain from the gaping wound on his head and neck. Her three children watched in horror as their father gasped for breath.

She screamed for help, but three police officers just looked on in disbelief, she said. The only vehicle which could take 49-year old Saleem Ameer to the hospital was engulfed in flames.

Minutes earlier, a Sinhalese mob had attacked Ameer with swords, fatally wounding him before pouring turpentine on his face despite a state of emergency in place following the deadly Easter Sunday bombings.

“It was hard for me to believe the mob could commit such a heinous crime,” she said.

On May 12 and 13, Sinhala mobs rampaged through at least 24 towns in western Sri Lanka, looting and attacking Muslim properties with stones, swords and petrol bombs.

In addition to killing Ameer, the mobs wounded at least 14 other Muslims, and destroyed over 540 Muslim-owned houses, shops, and mosques as well as nearly 100 vehicles, according to an assessment by Zam Zam foundation, a local social organisation.

Authorities said that Buddhist hardline groups were likely to blame for the wave of anti-Muslim riots that swept the island in apparent retaliation for last month’s bombings claimed by Islamic State of Iraq and the Levant (ISIL, also known as ISIS).

Armed navy personnel stood guard on a narrow strip of dirt track that leads to Ameer’s home in Kottaramulla, about 60km north of Colombo in western Sri Lanka. They are among hundreds of military and additional police who have been deployed in the region since the anti-Muslim riots.

A month earlier, such a nightmarish scenario would have hardly seemed imaginable in Sri Lanka’s northwest province, which had been largely unaffected by the sporadic ethnic violence seen in other parts of the country in the decade since Sri Lanka’s civil war ended.

This week, Sri Lanka marked the 10th anniversary of the end of its 26-year civil war between the government forces and the separatist Liberation Tigers of Tamil Eeelam (LTTE), who fought for autonomy for the country’s minority Tamil population.

Since the end of war, tensions have increased between the majority Sinhala community, which constitute 75 percent of Sri Lanka’s population, and Muslims, who at 9.7 percentconsider themselves to be a distinct ethnic group in the country. 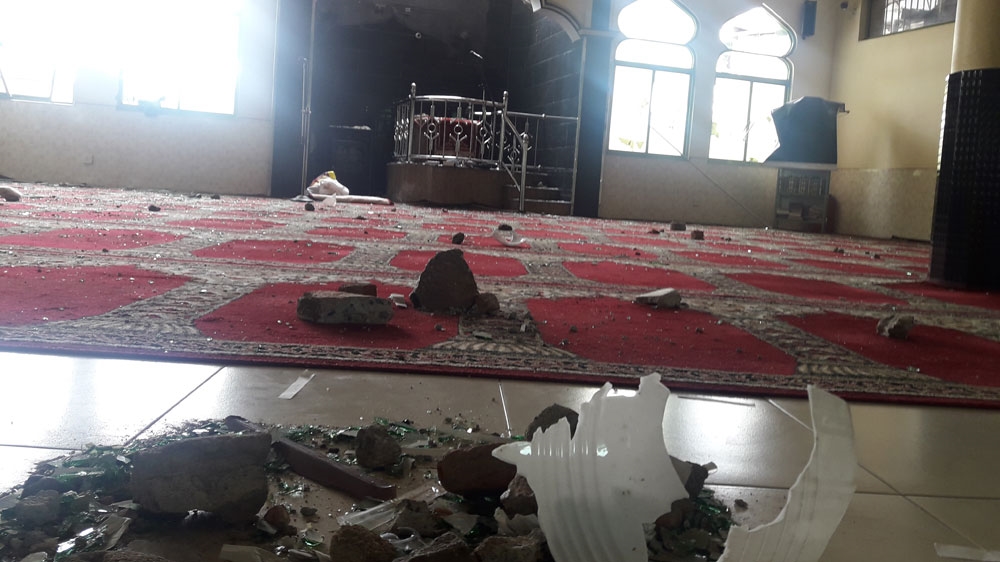 Last year, Muslim mosques and business were burned in an arson attack carried out by Buddhist mobs.

But the South Asian island nation has seen more violence in the last month than it had in the past decade.

A local Muslim hardline group, National Thowheed Jamath, was blamed for the coordinated attacks on three churches and three hotels on April 21 in the worst attack in a decade.

Police spokesman Ruwan Gunasekara said he could not verify the number of properties that were damaged until their investigation was complete. However, he insisted that “no deaths were reported”, although the local hospital and police in Kottaramulla confirmed Ameer’s death.

In the towns hit by violence, both Muslims and Sinhalese said they still felt unsafe, despite the increased presence of armed forces in the region.

Jiffriya’s Sinhalese neighbour said he feared reprisal attacks, and pointed to the presence of naval officers as evidence of such a threat.

Meanwhile, many Muslims said they feared they could be attacked again.

In Thummadora, another affected town about 40km east of Colombo, Abdul Wahid Mohamed Risvi, a 44-year-old father of three, is terrified about the possibility of more violence.

“I haven’t gone to work in a week because I cannot leave my children alone. I cannot sleep well either,” he said.

Many Muslims also said they no longer trust the police or the military to protect them.

“Before the incident took place, we asked for protection from the local monks and the police,” Aboo Haneefa Mohammed Ahsan, 26, told Al Jazeera in Thummadora. “They promised to provide security. But we were attacked anyway.”

Gunasekara admitted that “some incidents were reported in some areas after curfew”, but added that the “situation was brought under control” after the military was deployed.

The army investigated accusations of its complicity in the attacks after a video emergedon social media purportedly showing a soldier in Thummadora gesturing to a mob to attack a mosque. The army concluded that the soldier was merely adjusting an arm strap.

‘We can’t look at each other’s faces’

Meanwhile, residents in the affected towns report their long-existing relationship with their neighbours have been disrupted.

“We maintained a good relationship with the Sinhala community before the incident. Now we can’t even look at each other’s faces,” Ahsan said.

Evidence of political involvement in the attacks has emerged and instigators reportedly arrived in towns from the outside, in some cases on motorcycles and tririckshaws, according to video footage.

But victims said people from their own neighbourhoods were also involved. 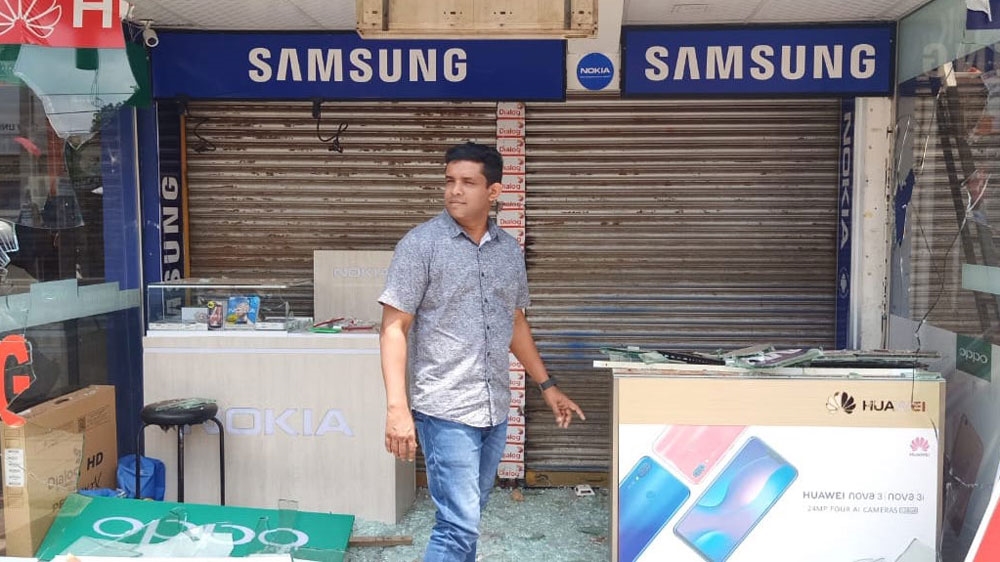 Mohammed Thowfeek Abdul Kamil, 39, said the CCTV footage of a mob attacking his electronics store in Nikerapitiya revealed that most of the perpetrators were local men.

“I recognised them when I watched the video,” he said.

However, Risvi said while some of the local Sinhala population in Thummadora joined in the attacks, there were others who tried to protect their Muslim neighbours, sometimes at great personal risk.

“When two elderly Muslim women walked into the town, a Sinhalese family came to the road and brought them into their home to protect them. Some Sinhalese also tried to dissuade the mobs from attacking,” he said.

One Sinhalese women in Thummadora, who requested anonymity, warned three Muslim families of the impending attacks and hid them in her home. She said she was terrified for her own family’s safety but saw it as her duty to protect her neighbours.

“As a Buddhist, I must do my best to protect other people, regardless of their religion,” she said.