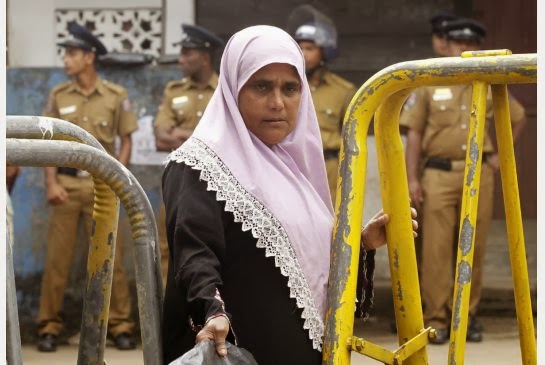 Attacks on mosques in Sri Lanka have stirred anew religious tensions in this country, where about 9 per cent of the population — 1.4 million — practise Islam. Here a Muslim woman walks past a police barricade outside a mosque vandalized in Colombo in August, 2013. Cellphone cameras captured the ugly scene: Muslims being chased through the streets by maddened Buddhists.
The vandals had just attacked a mosque in the Grandpass neighborhood on the capital’s outskirts, falling upon Muslims at Friday prayers, smashing windows, then pursuing the worshipers with clubs, hurling stones. At least five people were hospitalized.

That was in early August and stirred anew religious tensions in this country, where about 9 per cent of the population — 1.4 million — practise Islam. Most are known as Moor Muslims, descendents of Arab traders who plied their trade along Sri Lanka’s coast as far back as the eighth century.

Muslims in Sri Lanka have for some replaced Tamils as the perceived enemy — a threat to the nation’s Sinhalese-Buddhist ethos.

There had been similar mob assaults on mosques and Muslim businesses last March, incited in large measure by xenophobic rhetoric from Sinhala Buddhist extremists aligned with two fringe groups — Sihala Ravaya (Sinhalese Roar) and Bodu Bala Sena (Buddhist Power Force). Three Buddhist monks and four others were arrested with the arson attacks but were later freed because the victims declined to press charges. Others saw it — and the stand-around do-nothing response by police at Grandpass — as more evidence of how bigoted clerics operate with impunity from law enforcement and a government that values the endorsement of politicized monks.

Intimidation of Muslims and damage to their property hasn’t been confined to Colombo. In the past year, upwards of 20 mosques have been attacked across the country by Buddhist fanatics, according to the president of the Sri Lanka Muslim Council — a worrisome mirroring of the wide-scale violence in Buddhist-majority Burma, which has seen a surge of attacks against Muslims with monks at the forefront.

“We have lived peacefully, united, with other faiths for centuries,” says Sheik Fazil Farook, media secretary for the Congress of Muslim Theologians, an organization of 6,000 scholars in Sri Lanka. “Only in the recent past has there been turbulence by a very few groups who are trying to divide the community, hardliners who claim to be Buddhists. The majority do not approve of them.”

“They say we’re going to bring in Sharia law, even though we tell them over and over again that we have no interest in doing so. This is not an Islamic country.” – Sheik Fazil Farook, media secretary for the Congress of Muslim Theologians

Muslims, most of whom speak an idiomatic version of Tamils interspersed with Arabic, have for some replaced Tamils as the perceived enemy — a threat to the nation’s Sinhalese-Buddhist ethos — despite the fact that Muslims suffered brutally under the fist of the Tamil Tigers in northern areas they controlled during nearly three decades of civil war. An estimated 72,000 were forcibly expelled and hundreds slaughtered. Indeed, a Muslim group recently protested on the sidelines of the Commonwealth Heads of Government meeting, decrying British Prime Minister David Cameron’s call for an international inquiry into alleged human rights violations during the war against the LTTE.

“This turbulence is new to us. I think they fear the extremism, the terrorism that prevails in other parts of the world,” speculates Farook, a sixth generation Sri Lankan. “But Muslims in Sri Lanka are very well educated. We have a 99 per cent literacy level. We’re not going to support terrorism. We never have in the past.

“They say we’re going to bring in Sharia law, even though we tell them over and over again that we have no interest in doing so. This is not an Islamic country.”

Yet Defence Secretary Gotabhaya Rajapaksa, who co-ordinated the government’s final smashing of the LTTE and is widely viewed as the most powerful man in the country, found it necessary in a recent speech to warn against a “breeding ground” for Islamic radicalism in Sri Lanka’s Muslim communities.

That enraged Justice Minister Rauff Hakeem, a Muslim and important member of the central coalition government. “I would like to publicly contradict the assertion of the secretary of defence,” he countered in an unusual public outburst. “We are extremely disturbed by the specific reference to the Muslim community.”

If anything, Muslim leaders here have gone to great lengths to assert their loyalty in statements and actions that some consider too obsequious.

Following the August riots, which resulted in a brief night curfew as army troops patrolled the city, mosque officials agreed to abandon their newly built house of worship in Grandpass. The mosque had been targeted because local Buddhists resented its construction close to a temple. The old structure was earmarked for demolition as part of the city’s bold redevelopment plans. Within days, the city’s Muslim Council announced they were going back to the previous facility and the government would be providing funds for renovations.

It was a swift capitulation.

Then Buddhist reactionaries objected vociferously to the practice of Halal — the Muslim dietary laws that prescribe certain procedures for the slaughtering of animals — and demanded the Halal logo be removed.

“This really shocked us,” says Farook. “But we decided, OK, we’ll give it up. This was meat going into their houses too. Only one of 52 companies withdrew their certificate. But they’re still Halal, so it really had no impact. Our concern was that the majority might feel we are doing a racist act by not consuming their products, not going to McDonald’s, hurting their business.”

The dispute over Halal meat was actually about economics, Farook concluded. “We’re 10 per cent of the population but the Halal companies had captured 20 per cent of the market. That’s really why they were angry.”

How far will Muslims allow themselves to be pushed, though? How often will they concede to avoid antagonizing a minority of fire-breathing ultra-nationalist Buddhists?

Farook sighs. “This is the Prophetic approach — be calm, be peaceful. The more you aggravate him, the more forbearing he becomes. We have never degraded any religion, certainly not the ideology of Buddhism. We give the highest amount of dignity to religious communities. We respect a monk more than the Buddhist community respects them.

“Muslims have lived in this country since the time of ancient kings and we have made a lot of sacrifices. Muslims supported the government to bring an end to the war. We have been loyal.

“All we want is for the rule of law to prevail for us too.”