In short: Main points of the petition filed against Gotabaya Rajapaksa 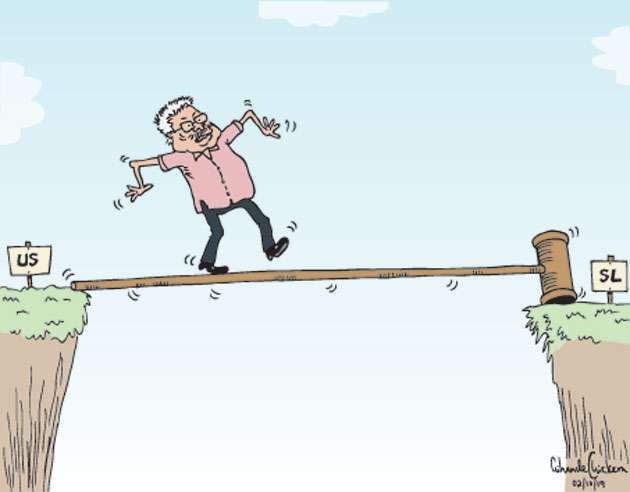 The case filed before the Court of Appeal challenging the Sri Lankan citizenship of SLPP presidential nominee Gotabaya Rajapaksa by Prof. Chandragupta Thenuwara and senior journalist Gamini Viyangoda will be taken up before the three-member Special High Court on October 02, 2019, which is today.

1. One who is not attached to Sri Lankan citizenship in accordance with 89 (a) clause of the Sri Lankan Constitution collectively read with 92nd clause is not lawfully obliged to elect as President.

4. This was when he was assuming as Premier, therefore, his term of office dismisses the prime ministry.

5. The Cabinet dissolves with the prime ministry ends term.

7. All positions remain vacant until a gazette notification declares personnel for the respective ministerial and secretarial portfolios.

8. In circumstances which all seats remain vacant and no additional gazette issuedfor any active titles, or no lawful alternative is implemented, none shall has the jurisdiction to sign documents to assume either of the seats.

10. Secretaries for the respective ministries were appointed in December 13, 2005.

11. The dual citizenship for Gotabaya Rajapaksa, or more specified he is attached for Sri Lankan citizenship as well, was issued in Monday, November 21, 2005, three days after Mahinda Rajapaksa assumes office.

14. Thus dual citizenship is due process that cannot be concluded within a day resembling issuing a driver’s licence. The application process consumes mass documentation and time.

15. In addition, the requirements to qualify for dual citizenship must be fulfilled. There is a long and tedious process that can never be completed within a day.

17. Given the circumstances, the validity of his Sri Lankan citizenship, regardless of whether he has withdrawn his US citizenship, is in question.

18. All documents he was registered to (including the electoral register) thereafter are in question.

19. The mere existence of a certificate does not prove anything, for the reasonsbehind the issuance of the certificate and whether the signatories were authorized to do so were challenged.

20. The crucial point here is whether the Dual Citizenship Certificate dated November 21, 2005 is a legal certificate issued under competent jurisdiction or merely a paper of no legal value.

21. In addition, obtaining a passport after the US citizenship was withdrawn under a false NIC, irregularities in the serial numbers and many other facts have been detailed in the petition.