In search of justice: The story of the people of Kepapilavu 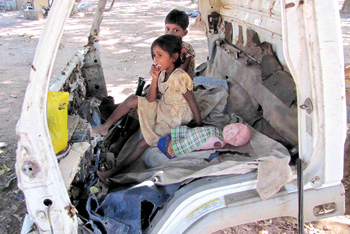 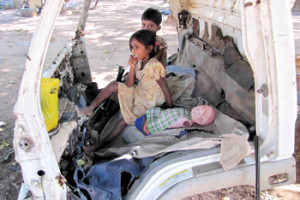 dream
In search of justice: The story of the people of Kepapilavu

The life and times of the people of Kepapilavu should make for a study in endless suffering. After witnessing the war at its cruellest, experiencing multiple displacements and spending the longest interval of time confined in Menik Farm, one would expect that life can hardly get any worse. Yet, their present situation is darker than their past, and the future is a landscape of uncertainty.
The story of the people of Kepapilavu reminds all of us that the ethnic conflict is far from over. Their reality contradicts the regime’s claims of rapid post-war development and the rhetoric of peace.

So much for rights
“Any citizen of Sri Lanka has the inalienable right to acquire land in any part of the country, in accordance with its laws and regulations, and reside in any area of his/her choice without any restrictions or limitations imposed in any manner whatsoever” — The Lessons Learnt and Reconciliation Commission Report ( 6.104).

The Headquarters of the 59th Division, in Kepapilavu, Mullaitivu spans over a thousand acres. Much of the residential land and some of the agricultural land are believed to be legally owned by private individuals who hold legal documentation. This military base is the root cause of all the problems the people of Kepapilavu are facing. The Government Agent of Mullaitivu and several military officials, who visited the Kepapilavu families in Menik Farm a few days before the closure of the internment facility, promised the people that they would be resettled in the lands of origin within two months. It’s been three months and the promised resettlement is yet to happen: the people are still living in Seeniyamottai, a barren area close to Nandikkadal. They were forced to take refuge here as a temporary measure after leaving Menik Farm.

Massive buildings in the Kepapilavu HQ and the army’s general behaviour suggest that the promised closure of this facility will not happen anytime soon. The allocated compensatory plots, in Seeniyamottai, are infertile and smaller in size than the lands in Kepapilavu. The army is coercing the people into accepting Seeniyamottai as the alternative. In a bid to seal the dispossession, the army is building permanent houses for the families; in contrast humanitarian agencies refused to construct any permanent structures, fearing that it would compromise the people’s rights and wishes. When six women braved their circumstances and made preparations to file fundamental rights petitions to acquire their lands back, they were called into the GN office and threatened by high ranking army officials. They were apparently told that their pursuit of justice would ‘result in losing what little they have.’

The normal and the abnormal
Fear and intimidation caused by the military’s presence is plainly visible. The level of military involvement in civilian life in the Seeniyamottai camp is a grim reminder of Menik Farm days. The uniformity in the people’s answers to certain questions demonstrates that they are under strict orders.

For ordinary people, survival is the priority. Enforcing helplessness is the simple strategy employed by the Government in its attempts to normalise the present. The goons, the conventional army, and the military intelligence department operate on many different levels in the mission to silence the people’s voice. The goons go around throwing petrol bombs, pouring foul oil on protestors and collecting information for the higher powers; the conventional army is the pacifying force, and does the propaganda work as well; the intelligence department is responsible for promptly removing anyone who shows the slightest glimpse of political awareness. While this is the general trend in the North and the East, in the Vanni it is worse. The day when the abnormal becomes the normal is not far away. As for the people in Kepapilavu, it has already happened.

Unwillingness to learn from the past
The mistreatment of Kepapilavu families highlights that Sri Lanka is yet to repent for its original sin: the failure to treat the minority communities as equal citizens. Living in one’s land of origin is a fundamental right. The denial of this right was a major factor that gave rise to the country’s ethnic conflict. It is depressing to see the mistake so wilfully repeated in the lives of the people of Kepapilavu. Indeed, what we are witnessing now is nothing new. Sri Lanka has already seen the consequences of arrogant denial of rights.

Today, in Sri Lanka, more than ever, the place of the minorities’ is increasingly under threat. The self-proclaimed patriots who concern themselves with the fight against separation remain consciously ignorant of the causes that gave rise to the Tamil struggle. Tamil political leaders have failed to envision a new strategy: they seem stuck with the international community – a force that has failed the Tamils and will happily do so again. Moderates, of course, are silently watching the inferno burn down the country. Will Sri Lanka ever learn?

Natural justice, the Chief Justice and the people of Kepapilavu
Ironically, the people in Kepapilavu are the very people the state proudly claims to have liberated from the LTTE. Recently, the government drafted an Action Plan to implement the LLRC recommendations. And it has also promised a new dawn in Sri Lanka’s human rights history. Three-and-a-half-years after the end of war, there is nothing new in the lives of the people in Kepapilavu.

‘I just want to live and die in the land of my origin,’ a middle-aged mother summed up the entire community’s plight. The demand to return to their lands goes beyond economic reasons, and has nothing to do with any ethno-political ideology. There is no justification for setting up a swarm of military bases and stealing private lands in the process. This land grab by the military is illegal, and must be treated as such. The Army HQ must be closed down, or relocated, and people must be allowed to settle in the original habitat.