In Memory of Lasantha: Media censorship is part of a bigger strategy 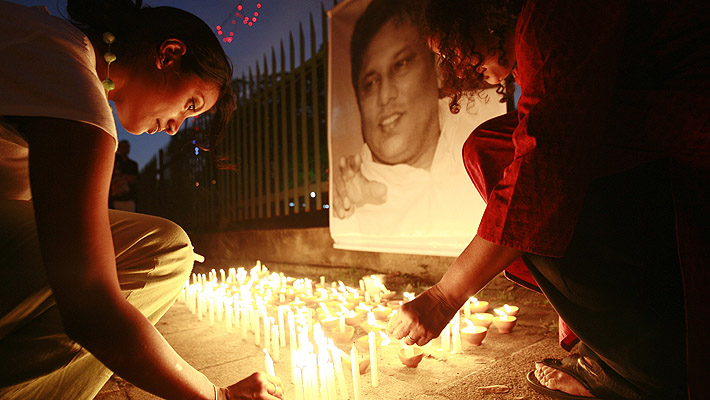 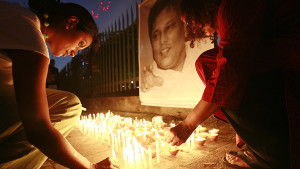 JS TISSAINAYAGAM
The following is the full text of the speech given by senior journalist JS Tissainayagam at Lasantha Wickramatunge Memorial Event in Toronto today (21), organised by the Sri Lankans Without Borders and South Asian Journalists Association.
Ladies and Gentlemen: good afternoon. I’m happy to be here with you and speak at this event. I would like to thank the organisers for putting together the Lasantha Wickrematunge Memorial Lecture.
I worked with Lasantha at the Sunday Leader between 1999 and 2002. It is tragic that media censorship and political oppression against which Lasantha struggled valiantly then, and for which he died in 2009, persist four years after his death.

Following the military campaign, there are fundamentally two ways whereby the present Sri Lanka government has imposed censorship. One is through legislation; the other by physically targeting journalists. I am not going into detail about these legal measures due to the paucity of time. There is of course the notorious Prevention of Terrorism Act. But more importantly, there were new regulations that came into effect after armed combat ended in May 2009. They mostly pertain to restricting the dissemination of news on the internet and via telecommunication networks.

I now come to the second form of control – terrorising journalists. There are a number of ways whereby this happens: disappearance, abduction, imprisonment threat and torture. Prageeth Ekneliayagoda, for whom this empty chair is dedicated, disappeared from the capital city of Colombo eight months after the military campaign had ended. Today the government’s only answer to his disappearance is to orchestrate a smear campaign against his wife and refuse to conduct a credible investigation into the incident.

The effect of these methods of terrorising the media has been twofold. Its impact on the media itself is forcing journalist to censor themselves. But its reach is much wider. It also closes the mind and our ability to critique and question the status quo.

The question is “why.” Why does the Government of Sri Lanka persist in imposing such tight restrictions on the media? Why does it want to endure such withering scorn about the moral turpitude of its leaders and the feebleness of its institutions by doing so?

There is more than one reason for this. But one of the most important causes of censorship is that the government doesn’t want reports of its conduct during the war to undermine post-war consolidation. Stories of war crimes and crimes against humanity of which the government stands accused must not be published. The LTTE too stands accused of these crimes.

The government fears that if censorship is lifted and restrictions such as the PTA are no longer in operation one of the first things the media will do is to go to where the story is: a story long suppressed through censorship. And that is the story of what actually happened in the final months of the war.

The government is deeply concerned these stories will infiltrate southern Sri Lanka and the moral ugliness of such savagery will be repugnant to many Sinhalese. The fear is that an open discourse will persuade the vast majority of Sinhala people within the country to demand an impartial investigation into war crimes of the political leadership. Thereby the government will lose its support base.

Days after the fighting ended President Mahinda Rajapakse speaking on national television said (and I quote), “Some tried to stop our military campaign by threatening to haul us before war crimes tribunals. The strength I have is your support. I am even ready to go to the gallows on your behalf.”

Rajapakse has lost almost all support among the Tamils – four successive elections prove that. The support he speaks about is the Sinhala base. And if that base feels repulsed by his actions, where can he, his family and senior members of his administration find refuge?

It is to clutch onto the legitimacy it enjoys, that the Rajapakse government has embraced its present media policy of preventing stories about Mullivaikal and militarisation in post-war North, to trickle into the South. That policy, pivots on ghettoising the North – and to a point – the East. The ghettoising has three aspects to it.

The first is militarisation. Militarisation ensures through surveillance and coercion that information about what happened then, and is happening now, does not leak out. The most recent manifestation of this was when the Tamil survivors of armed combat, among others, met with UN High Commissioner for Human Rights Navi Pillai to relate their woes. They were later subjected to harassment by government authorities.

The second aspect of ghettoising is by restricting journalists from outside having free access to the North. Now the general perception is that things are better today for journalists to go to the northern Sri Lanka, but that is not strictly correct. Even today, foreign journalists need defence ministry clearance to obtain a work visa before entering the country. Also, people interviewed in the North by journalists are subjected to harassment by local military authorities.

Local journalists can travel to the North without permission. But that does not exclude them from being shadowed and harassed by the military if the government does not want the coverage taking place. In this regard, I would like to quote an excerpt written by Ruki in Groundviews with regards to accompanying a group of television journalists to the Wanni. I quote, “It seems clear the government doesn’t want the people in other parts of Sri Lanka and the outside world to know the bitter truth of land occupation by the military…” End quote.

The third element used by the government to ghettoise the Tamils is propaganda. Its objective is to show up the Tamils – especially those living in the North and East – as the enemies of the Sinhalese, the ‘other,’ which has to be pacified and controlled. This policy is being implemented very cunningly by the Rajapakse regime. The government does not call Tamils enemies of the Sinhalese, directly. Instead, the president and his government express platitudes such as there are no minorities living in Sri Lanka and that all communities live in harmony.

But we know this so-called harmony is under a shamelessly Sinhala hegemonic State. The moment Tamils try to challenge that domination by agitating for equal rights, the kneejerk reaction is to label the Tamils as the terrorists and thereby the ‘other.’

I would like to cite an example to illustrate this. On November 27 last year, when Jaffna University students commemorated of those who died in the war, four students were arrested, not by the regular police but by the Terrorism Investigation Division. They were arrested under the PTA. They were never charged but sent to ‘rehabilitation’ that is purportedly reserved for LTTE cadre. We know the numerous protests that took place throughout 2012 where university students and teachers clashed with the police in the South. But never were they detained under PTA, nor were they sent for rehabilitation. The ‘other’ could be no clearer.

Therefore, the regime’s policy is very clear. If the government and its leaders are to preserve their primary support base from eroding they cannot be perceived as war criminals by the Sinhala masses. But for that to happen, the Tamil narrative of Mullivaiykal and military-run North today cannot be told truthfully. Instead, the Sinhala ruling establishment has to push its Sinhala hegemony project by representing the Tamils as the ‘enemy’ and not as victims of government policy and military brutality.

But one might ask if the primary aim of the government is to control stories of war crimes from the North, why is the media in the South of Sri Lanka subject to privations? The reason is that while the North is important because it is the repository of the Tamils’ narratives of oppression, the South too is important. If war crimes-related issues are to be effectively concealed, censorship has to be blanket. Secondly, repression of the people in one part of the country, inevitably begets repression in other areas too. And therefore the Rajapakse government is careful to contain incriminating stories from the South as well.

To conclude: media censorship is part of a much bigger strategy. It is mainly, to ward off accusations of war crimes and crimes against humanity against the Rajapakse family and the government, from becoming part of public discussion among the Sinhalese. In order to engineer this favourable image the government is prepared to censor the media and terrorise journalists.

The self-preservation policy of President Rajapakse and his government obviously runs contrary, to his rhetoric of Reconciliation. If you want the Sinhalese and Tamils to reconcile, there has to be first and foremost, a frank dialogue between the two groups. But if, official strategy is to prevent that, by ghettoising the North and censoring media throughout the country, reconciliation will only remain in words, not deeds.