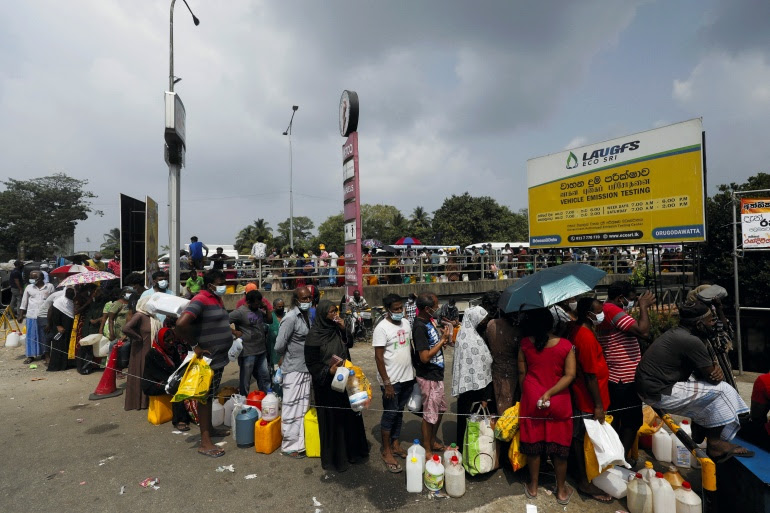 Image: People stand in a long queue to buy kerosene oil at a fuel station in Colombo [Dinuka Liyanawatte/Reuters]

Widespread fuel shortages and sky-rocketing prices cause misery and hardship across the island nation.

(Reuters) At least two people have died in Sri Lanka while waiting in long queues for fuel, officials say, as widespread shortages and sky-rocketing prices cause misery and hardship across the island nation.

The men, in their seventies, died while they were waiting for petrol and kerosene oil in two different parts of the country, police spokesman Nalin Thalduwa in commercial capital Colombo said on Sunday.

For weeks, Sri Lankans have been queueing up at pumps, often for hours as the country battles the worst economic crisis in its history as an independent nation, with a lack of foreign exchange to buy vital imports shrinking the supply of essential goods.

“One was a 70-year-old three-wheeler driver who was a diabetic and heart patient while the second was a 72-year-old, both had been waiting in line for about four hours for fuel oil,” Thalduwa said. 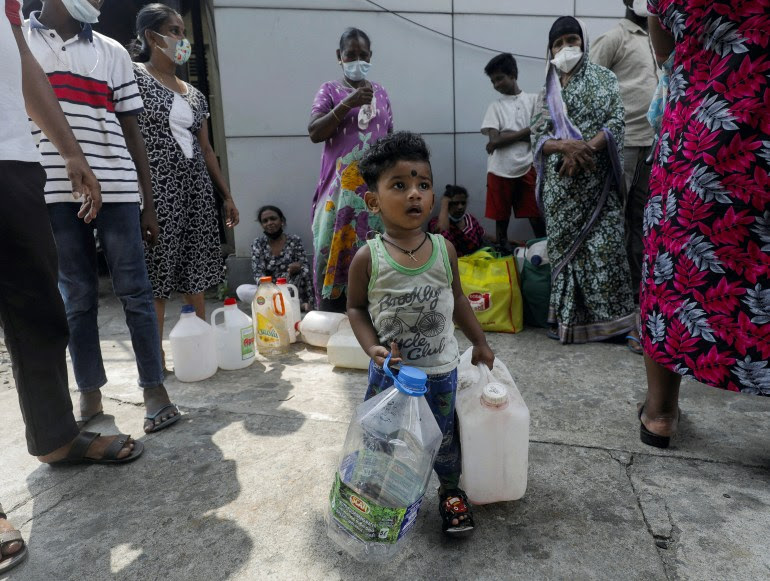 Motorists are forced to wait for hours outside filling stations for petrol and the government has imposed rolling blackouts as power utilities are unable to pay for enough foreign oil to meet demand.

Local media reports said multiple women standing in the hot sun to buy cooking gas had fainted at several locations across the island over the weekend.

On Sunday, Sri Lanka suspended operations at its only fuel refinery after crude oil stocks ran out, said Ashoka Ranwala, the president of the Petroleum General Employees’ Union.

The energy ministry could not be reached immediately for comment.

The use of kerosene oil has increased after low-income families began shifting away from cooking gas due to price increases. On Sunday, Laugfs Gas, the country’s second-largest supplier raised prices by 1,359 Sri Lankan rupees ($4.94) for a 12.5kg cylinder, the company said in a statement.

Sri Lanka has been struggling to find dollars to pay for increasingly expensive fuel shipments since January, with its foreign currency reserves dipping to $2.31bn in February.

In February, Sri Lanka’s inflation hit 15.1 percent, among the highest in Asia, with food inflation soaring to 25.7 percent, the latest government data showed.

Earlier this month, Sri Lanka’s central bank floated the rupee causing the currency to plummet by more than 30 percent to trade at about 275 rupees per US dollar.

Authorities announced last week that the country will seek an IMF bailout to resolve its worsening foreign debt crisis and shore up reserves.

Shortages have wrought havoc on almost every aspect of daily life, with authorities this week postponing term tests for nearly three million students because of a lack of paper and ink.

Milk powder prices increased by 250 rupees ($0.90) for a 400g pack on Saturday, prompting restaurant owners to raise the cost of a cup of milk tea to 100 rupees.

Last week, authorities cancelled exams for millions of school students in the Western Province as the country ran out of printing paper. The island’s electricity utility also said it is out of paper to print monthly bills for millions of consumers.