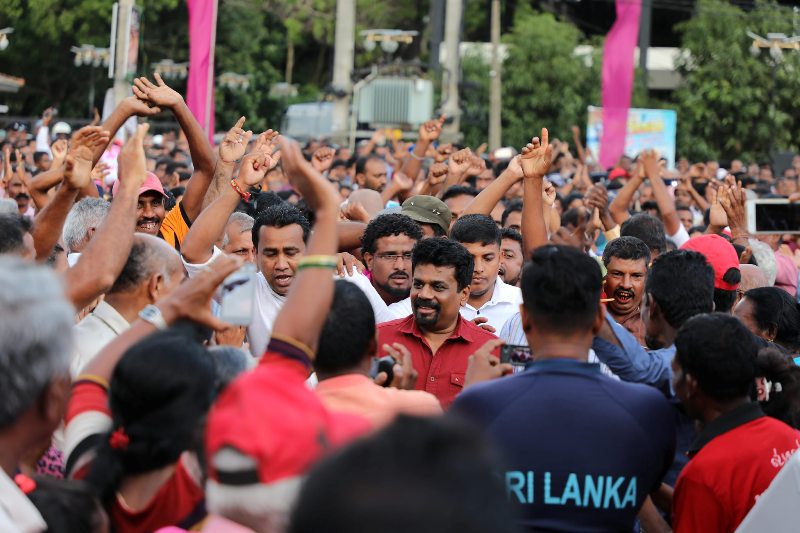 The JVP candidate Anura Kumara Dissanayake, supported by the National People’s Power (NPP), undoubtedly is well ahead of all other candidates in terms of ideas, principles and policies presented before the people at this election. Those are not just election promises or bogus gestures like what the other two main candidates have competitively put forward.

It would be completely unfortunate, in that context, if AKD receives just third place in this contest. Therefore, those who feel and believe that AKD has presented the best political program for the country should unreservedly support and vote for him first, before thinking of the lesser evil between the two main candidates.

Due to the anti-democratic deviations of the Rajapaksa Government, people voted it out in 2015. Due to the terrible mistakes of the Yahapalana Government, some people might be thinking of going back to a Rajapaksa regime again, while others might be thinking of preventing such an eventuality through new leadership. Whatever reasons for thinking and feeling this way, we are going in circles. What the country misses in the process is a long-term plan and a strategy to get the country out of its present mess.

I have never been supportive of the JVP before, the main reason being that the JVP movement was associated with violence in the past. My attitude of course has softened in recent years, but I was not confident openly supporting its candidate until I listened to and read what AKD and the NPP have put forward at this election. It is quite path-breaking.

If there is any possibility of eliminating or curtailing corruption, waste and misuse of public funds in this country, it is undoubtedly through the pressure and involvement of the JVP in public and policy administration. They are undoubtedly clean and exemplary. In addition to their integrity, they appear to have policies for eliminating corruption, including the open theft of public funds. The record of the UNP, the SLFP and now the SLPP are absolutely tainted and horrible in this respect.

A new political culture and a new leadership is necessary. The JVP emphasises the elimination of corruption. Young men and women, as well as any fresh thinkers, should rally around the JVP/NPP in their thousands for this task in the future. This election may only be a harbinger.

AKD in his various speeches has emphasised Sri Lanka’s development predicament in the following manner, highlighting those who have been responsible.

“Throughout the last 71 years, the country was ruled by SLFP and UNP governments. When we got independence, we were second in Asia. The per capita income in Japan was $ 90. Ours was $ 89. All other countries in Asia were below us. Since then production has broken down. Agriculture was devastated. Exports dwindled, but imports increased. The trade balance widened. At present, the debt rate is 83% of the GNP. Sri Lanka’s debt to the world is Rs. 12 trillion. This debt has been heaped on the people.”

We are of course yet to see the final election manifesto that the JVP/NPP will propose to uplift the country and the people from this economic quagmire. However, the main contours have been articulated with an emphasis on (1) Modernised agriculture, (2) Promotion of export industries (3) the State sector taking over the responsibilities for transport and public services, (4) Public sector-private sector partnerships (5) The strengthening of education and higher education in order to utilise manpower and human resources for development.

Of course, the people are at the centre of such an economic strategy addressing poverty, economic inequality and uneven development between the urban and rural sectors, and different regions and provinces. The NPP is not visualising a closed economy. Their perspectives are fundamentally modern.

Although the final election manifesto is not yet out, the NPP has launched policies for several sectors, inviting experts and committed activists in those areas such as education, health, transport, environment, national unity, women’s activities, culture and agriculture. There have been several policy meetings and conferences held in this respect.

The JVP undoubtedly is the least racist or communalist in ethnic or religious terms. However, they are yet to make proper inroads in the North and the East. As socialist idealists, they may naturally underestimate nationalist drives of ethnic minorities. However, on the questions of ethnic and religious equality and justice, they are unequivocally committed and dedicated. Understandably, they naturally pay more emphasis to class and economic issues than on other issues. A dialogue may be needed in this respect.  I was impressed by Anura Kumara Dissanayake’s answers, particularly his reply to a question on the ‘rule of law’ at the common platform for presidential candidates, organised by the March 12 Movement at the Sugathadasa Stadium on 5 October. The common criticism of the practice of the ‘rule of law’ is to highlight the two standards adopted for those who are ‘with power’ and those who are ‘without power.’

While of course admitting that unacceptable discrepancy, AKD also highlighted the much more fundamental discrepancy that serves ‘one rule of law for the rich’ and ‘another discriminatory rule of law for the poor’. This is something many middle class theoreticians usually miss. Likewise, for many political debates and issues, he has brought new thinking and new vision during the presidential campaign.

In summary and conclusion, the importance of the NPP candidacy for the Presidential Election undoubtedly has been to elevate the political debate and campaign to a higher policy and programmatic level. This is the only way forward for the country. Perhaps this is the first time (first Presidential Election) where such a quality debate has taken place. It is hoped that the other two main candidates and their cohorts also follow suit (hopefully).

Of course there are so many other ‘Vikalpa’ (alternative) candidates who are supposedly on the same wavelength, although they have not been able to articulate their policies and principles with such clarity and precision. Even at this stage, what they can do is join the NPP or come to an understanding and support the candidacy of AKD. There is no point in posing too many ‘Vikalpa’ to the status quo.

This election can be a harbinger. The next Parliamentary Election can offer more purposeful ground to present the NPP program before the people. This should lead to the next. Anyway, the Parliament is more important than a one-man show. At this election, defeating the most evil or most dangerous candidate is also important by casting people’s second preference. There is no contradiction. Second preference is a bonus to the people at this election. Casting that will not harm AKD’s exemplary candidacy or the NPP’s forward-looking program.