Implications of Minister Peiris’s visit to the US 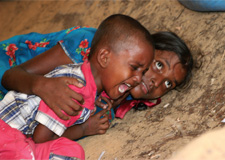 Besides the LLRC recommendations, Clinton is now certain to raise what Washignton calls “accountability issues not addressed by the LLRC.” The US is not in favour of the military investigating itself and holds the view that it “should be credibly investigated” by a “centralised mechanism.”
However, the US has not made clear what such a mechanism is. This is notwithstanding the visit to Colombo by Stephen J. Rapp, Ambassador-at-Large heading the Office of Global Criminal Justice in the U.S. Department of State. It is also in favour of cash payments for those affected though Washington is reluctant to call it “compensation.”

The US position, articulated again this week, to External Affairs Ministry officials among others is that it is now time to talk about the LLRC recommendations. They have noted that even in his address to the United Nations General Assembly (UNGA) in 2010, President Rajapaksa had referred to the LLRC. Secretary Clinton had then declared the Commission should be given time to look at issues. Pointing out that the LLRC came out of a government process; the US government holds the view that it was now time to enforce its recommendations. Among the plus points in government’s favour, the US has noted, is the reduction of inmates to some 6,000 at transit camps, the rehabilitation of ex-combatants and the military’s demining operations.

Another move towards the thaw in relations came when the US renewed further assistance for demining efforts in the former battle areas. Two weeks ago, visiting Colombo and the north was Maj. Gen. Walter D. Givhan, a onetime command pilot and now Deputy Assistant Secretary for Plans, Programs, and Operations, in the U.S. Department of State’s Bureau of Political-Military Affairs. General Givhan oversees the Bureau’s Offices of Plans, Policy and Analysis; Weapons Removal and Abatement; and International Security Operations. In this capacity, General Givhan is responsible for providing executive leadership, management, and guidance for U.S. government global security assistance programs and policies, such as Foreign Military Financing and the Global Peace Operations Initiative. He also oversees the Department of State’s conventional weapons destruction efforts, handles State-DoD co-ordination on significant military exercises, and helps to manage State Department-Defence Department personnel exchange matters.

For External Affairs Minister Peiris, preparing a document which encompasses some of the salient recommendations of the LLRC, not all, is one thing. It is altogether another question whether he would be able to put together an Action Plan which would encompass most what he has selected. He will require the endorsement of other partners in the UPFA. What these parties would consent to and what they would not wish to be implemented becomes a critical issue.

As exclusively revealed in these columns last week, Peiris presented a “supplementary cabinet paper” at the weekly ministerial meeting on May 2 recommending the appointment of a Committee headed by Presidential Secretary Lalith Weeratunga “to decide which are appropriate for implementation.” He noted in his memorandum that the work of the Committee, whose other members are to be named by Weeratunga, “requires extensive co-ordination.” The Sunday Times has learnt that the appointment of the Committee came during diplomatic consultations with the US. This was after the need for a mode for implementation of recommendations arose. The Committee is to function from the Ministry of External Affairs.

A senior minister involved in the process, who did not wish to be identified since he is not authorised to speak to the media, detailed out to the Sunday Times how the proposed official Committee under Weeratunga will function. The source said, “at first it will only take up recommendations of the LLRC on which all constituent parties of the UPFA government are in accord.” It is only thereafter, the source said, that the other recommendations “will be taken up, one by one. That is on the basis of consensus reached on each issue.” Herein lay some key issues. In a broader sense, some of the recommendations made by the LLRC have been or are being implemented. One such case is the resettlement of those displaced by the war. Another is a recommendation to ensure a “trilingual (Sinhala, Tamil and English) fluency of future generations…..” Such an initiative is already under way.

In the same broader sense, the other recommendations fall into two different categories. One is LLRC recommendations on which all constituent partners of the UPFA would agree without much dissent. One such case relates to the National Anthem. The LLRC recommended that “the practice of the National Anthem being sung simultaneously in two languages to the same tune must be maintained and supported. Any change in this practice at the present time would only create a major irritant which would not be conducive to fostering post-conflict resolution.” In other words, the LLRC has called for the re-instatement of the practice that was in force. No constituent party in the government would oppose such a move.

However, not all in the UPFA including its main partner, the Sri Lanka Freedom Party are committed to one view on some major issues listed by Peiris from the many recommendations of the LLRC. For example, the Police Department, which is entrusted with law and order responsibilities. The LLRC recommendations, among other matters, noted that “The Police Department is a civilian institution which is entrusted with the maintenance of law and order. Therefore, it is desirable that the Police Department be de-linked from the institutions dealing with the armed forces which are responsible for the security of the State. The Commission is of the view that an independent Permanent Police Commission is a pre-requisite to guarantee the effective functioning of the Police and to generate public confidence. Such a Commission should be empowered to monitor the performance of the Police Service and ensure that all police officers act independently and maintain a high degree of professional conduct.”

The 18th Amendment to the Constitution, passed in September 2010, severely curtailed the powers of the Public Service Commission to appoint, promote, transfer, have disciplinary control and dismissal of public officers. It is only empowered to entertain and investigate complaints from the public or any aggrieved person against a police officer or the police force. The Cabinet was empowered to determine all matters of policy relating to appointments, promotions, transfer, disciplinary control and dismissal.
Similarly, there are a number of other contentious areas. Space constraints prevent a detailed description of all the relevant recommendations by the LLRC.

A corollary of this dichotomous situation — having recommendations on which constituent parties of the UPFA could easily agree upon and issues on which they are at variance — will lead to one clear position. Only the “non-controversial, easily acceptable” recommendations of the LLRC will first find a place in the Action Plan of Peiris. It is these recommendations that a Committee under Lalith Weeratunga, entrenched in the Ministry of External Affairs, will first seek to implement. Thus, the billion dollar question is whether it would, at least in the long run, meet the expectations of US and its allies.

More so in the context of the resolution adopted in Geneva calling for the implementation of provisions in the resolution. Would a catalogue of “non-controversial” LLRC recommendations albeit some now under implementation satisfy them? This is when the core issues (set out in the resolution) would have to be addressed before the March 2013 sessions of the UN Human Rights Council. If indeed the constituent parties agree on those issues, it would be clear that the government has gone into action only after the US resolution was adopted in Geneva. The core of a bizarre foreign policy now followed by Sri Lanka is to let damage occur and then seek measures to rectify it. It has been pointed out many a time in these columns.

Another critical factor stems from the recent visit to India by Secretary of State Clinton. It is now confirmed that besides talking bi-lateral issues with Prime Minister Manmohan Singh, she also discussed issues related to Sri Lanka. This came when they talked of matters relating to the region. Diplomatic sources said yesterday Singh told Clinton India was disappointed that Sri Lanka had gone back on pledges made. The reference was to assurances given to New Delhi that the government would implement provisions of the 13th Amendment to the Constitution and move beyond it. This was the reason why New Delhi had backed the resolution in Geneva. Singh had also briefed Clinton about the visit to Sri Lanka by an Indian parliamentary delegation headed by Opposition Leader Sushma Swaraj. Washington’s position is that it consults New Delhi regularly on issues in the region including matters on Sri Lanka.

The United States is certain to raise issue over this matter during Clinton’s talks with Peiris. The government has taken up the position that the Tamil National Alliance (TNA) has not heeded its calls for talks to formulate a package to address Tamil grievances. It has also held the view that a Parliamentary Select Committee (PSC) cannot be constituted for the same matter since TNA has not consented to serve on it.

It is becoming increasingly clear from developments post-Geneva, that the blunders caused by the External Affairs Ministry are coming home to roost. At first, it was to challenge UN Human Rights Council’s right to entertain such a resolution on Sri Lanka. The United States was publicly accused of infringing on Sri Lanka’s sovereignty. An acting External Affairs Minister personally saw an effigy of President Barrack Obama being burnt in his electorate. Now, Sri Lanka is literally going on its knees to tell the United States and its allies that what they asked for is being done. Who are the wise men who caused those blunders? Like amoeba, Sri Lanka’s foreign policy keeps changing every moment making the country a laughing stock in the eyes of the international community.
http://www.sundaytimes.lk/120513/Columns/political.html