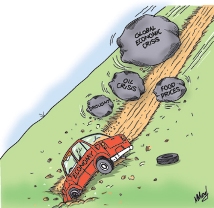 By Nimal Sanderatne
The emerging global conditions are likely to aggravate the country’s economic difficulties in the coming months. The tardy economic growth of Western economies will continue to decrease export earnings. The rising oil and world food prices will increase import expenditure. These developments will affect the trade balance adversely. Sri Lanka’s trade dependent economy will once again be vulnerable to these adverse global developments.

“There is a dark mood in the advanced economies, especially in Europe. The slower growth in the US and in the EU will have an adverse impact on the expansion of these markets for India’s exports, both of goods and services.” Dr. C. Rangarajan, Chairman of the Indian Prime Minister’s Economic Advisory Council (PMEAC), made these remarks when submitting a report on the Indian economy on August 17.

This is even more relevant for Sri Lanka’s trade dependent economy than the large Indian economy.
These global and domestic developments will affect the balance of payments, economic growth, decrease revenue collection and increase the fiscal deficit. The drought compounds the economic problems that the country faces in the coming months. The drought has affected agricultural production and the generation of hydropower. Consequently import expenditure is likely to increase. These adverse developments will pose seriouse conomic challenges, including the containment of inflation.

Latest GDP figures suggest a further deceleration in US growth in the second quarter of this year to1.5 per cent on an annualised basis. This implies that the US economic decline is persistent and that its growth momentum is losing steam. At the same time economic conditions are getting worse in Europe than previously expected. The annual growth rate in the group of 27 European Union countries fell to near zero in the first quarter of this year, from 2.44 last year. Eurozone governments are unable to agree on the scope and scale of spending to aid recovery and consequently the crisis could deepen in Greece and Spain and spread to Italy and France. Germany that was doing well is now being affected by the crisis.

China and India are also experiencing a slowdown in growth. China’s GDP grew by a lower 7.6 percent in the second quarter of this year. The first half year growth rate this year is the lowest in three years. India’s slowdown is likely to persist and add to the woes of a slowing world economy. India’s GDP growth in 2011-12 was down to 6.5 per cent compared to 8.4 per cent in 2010-11 and 8 per cent in 2009-10. India’s growth is expected to remain at around 7 per cent in 2012-13.

Our agricultural and industrial exports are declining. Gloomy global economic conditions are an underlying reason for the poor performance of our exports. Slow global economic growth that has already affected export earnings will continue in the foreseeable future. The fall in manufactured exports is having adverse impacts on industrial production.

Oil prices that had initially fallen sharply have risen significantly to three-month high and are heading towards the highest peak touched since the oil shocks. The confrontation between Iran and the West over Iran’s nuclear programme appears to have caused the price hike, though there is no shortfall in oil availability. The speculation caused by the prevailing political uncertainty makes the price hike more long-term. However, others say oil prices are not likely to increase much further from current elevated levels. International political developments with respect to Iran and Syria would bear heavily on oil prices even though international oil availability shows no shortfall.

Oil prices will have an important bearing on Sri Lanka’s import expenditure. If it continues at the current levels or rise further it could be a serious threat to the balance of payments. At present more than one fourth of import expenditure is on oil imports and about half of our export incomes are utilised for the import of oil.

Food production has been badly affected by adverse climatic conditions in many countries. Consequently international prices of food are on the increase. The increase in prices of several food imports will affect the trade balance and increase the cost of living.
The worst drought and heat wave in the US in the last half century has resulted in the loss of one-sixth of the expected corn crop. Corn farmers have been compelled to abandon their fields owing to the hottest summer ever recorded in US history. In addition, the soya bean harvest this year is expected to be the lowest in recent times. Prices for corn and soya bean are likely to reach unprecedented levels. The global markets for cereals are also adversely affected by the drop in Russian wheat production due to heat and dry soils. The US and Russia are the two largest grain exporters in the world.

The inclement and volatile weather has affected crop production in other countries as well. Like in Sri Lanka, in India, too, the monsoon failed and reduced food crop harvests. India’s rice output is likely to drop 5 to 7 million tons lower than last year’s harvest of 91.5 million tons as the country faces dry weather and scanty monsoon rains. The decline in rice output is likely to lead to India regulating its rice exports. Drought in parts of China has resulted in high prices of several other food crops, including rice and sugar.

International prices of vital food commodities have increased markedly and revived memories of the food crisis in 2007/08 when high food prices triggered riots in more than 30 countries worldwide. The Food and Agriculture Organisation (FAO), has cut its rice forecast for the year. The global paddy production is likely to drop from around 732 million tons to about 724 million tons. Nevertheless it maintains that global rice and wheat stocks remain high. However the true picture will not emerge till later in the year when there is greater visibility of the harvest in the northern hemisphere.

Food prices are also likely to rise progressively to higher levels due to increasing demand from an increasing global population and rising incomes in developing countries like China and India.

The current global conditions are unfavourable to Sri Lanka. The slow economic growth of Western economies will decrease export earnings, rising oil prices and international food prices will increase import expenditure. Both these will affect the trade balance adversely. The slower growth in the US and in the EU countries will have an adverse impact on exports. The drought in the country compounds the economic problems that the country faces in the coming months as it has affected agricultural production and the generation of hydropower.

Sri Lanka is particularly vulnerable owing to dependence on many basic items of food and the huge dependence on oil imports. Sri Lanka is directly exposed to global supply disruptions and export bans and price trends in wheat and sugar. The achievement of self-sufficiency in rice, particularly after the opening up of the North and East, has reduced the country’s vulnerability to the vagaries of global markets. However, it would be prudent to continue to monitor carefully the impact of the recent drought to ascertain the extent of the cereal deficit.

These global and domestic developments will affect the balance of payments, economic growth, decrease revenue collection and increase the fiscal deficit. These adverse developments will pose serious economic challenges, including the containment of inflation. It is important for the government to recognise these adverse trends early and take countervailing measures to lessen their impacts.
ST