Impeachment:Rather than so-called foreign interests, it is the Government itself which is destabilising the country. 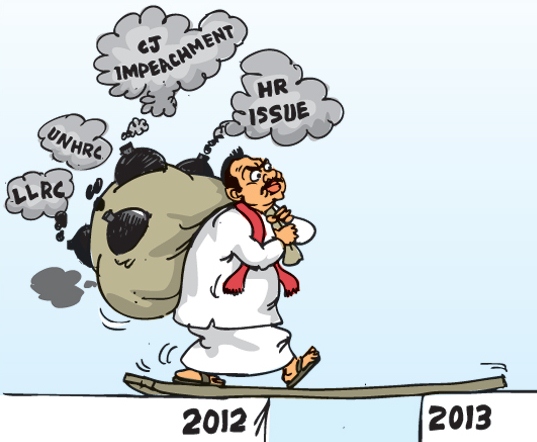 This week, newspaper reports quoted Sri Lanka’s Defence Secretary and President Mahinda Rajapaksa’s brother accusing foreign elements of ‘using the judiciary to destabilise Sri Lanka’ (Daily Mirror, December 29th 2012). This is a classic instance of doublespeak. It is abundantly clear that, rather than so-called foreign interests, it is the Government itself which is destabilising the country.

Its sheer brute force in ramming an arbitrary impeachment of Sri Lanka’s Chief Justice through Parliament against the express injunctions of judges and lawyers, professional bodies and religious leader across all major faiths speaks for itself. Are all these individuals and bodies supposed to be part of this convenient foreign conspiracy? Have we not played these childish games long enough?

Rule of Law replaced by Rule of Politics

These games are symptomatic not of benevolent authoritarianism but a ruthless quasi-dictatorship which acts contrary to the greater good of the country, contrary to the Rule of Law and contrary to the interests of the Sri Lankan people. The genial mask has now been stripped away to expose an insatiable thirst for power that would sacrifice all before it.

As much as a worthless gift may be wrapped in appealingly bright paper, the gilt only hides the rotten core of a regime which has abandoned the Rule of Law for the Rule of Politics.

Doubtless (barring a miracle in this season of miracles) this impeachment will go ahead. President Mahinda Rajapaksa’s rejection of a sensible compromise to prorogue Parliament thereby allowing the impeachment to lapse, as suggested by the leftist parties of his coalition, was unsurprising.

If Sri Lanka had been put first, over and above the arrogance of its political rulers, this compromise would have been the best solution. But the fury of the administration in being challenged by a Chief Justice that it once thought was fully amenable to its own will, sweeps all before it. Its leftist partners are only likely to grumble at being thus ignored, much like the uncaringly sheep-like members of the ruling party who will follow their leader blindfolded over a cliff if that is so demanded. The only concession to emerge from the regime is a ludicrous proposal that even though this impeachment will go ahead, a better procedure may be laid down for subsequent cases.

Government propagandists meanwhile furiously work overtime to justify the clearly unjustifiable. For example, the allegation of conflict of interest on the part of the Chief Justice in hearing particular matters has been loudly trumpeted. On her own part, the Chief Justice has publicly stated that no specific objection was raised to her hearing any case by any party or their lawyers. These matters will not be discussed further given that they are presently before the Court of Appeal. However some general reflections may well be appropriate at this point.

Earlier, tradition and good sense dictated that when a party to an action objected to a judge hearing a case, that judge was obliged to recuse himself or herself from the matter. In fact, even in the absence of an objection being raised, a judge is supposed to abstain from sitting on the matter in the first instance if a conflict of interest is apparent to his or her mind. This was the old tradition of the Sri Lankan judiciary.
But significant departure from this principle was evidenced not in the current Chief Justice’s time but during the Sarath Silva Court when objections arising from express conflict of interest were summarily dismissed as a matter of course throughout that ten year period.

Among the plethora of such cases is the Tony Fernando case where in defiance of all norms of propriety, Fernando’s petition citing the Chief Justice as a respondent was heard before a Bench presided over by the Chief Justice himself who dismissed all objections to his hearing the case without further ado. Fernando himself, a lay litigant and middle aged teacher of English, was then sentenced to rigorous imprisonment for contempt of court. As may be recalled, the United Nations Human Rights Committee quoted this case as an excellent example of judicial abuse of power when a plea by Fernando was brought before the Committee.

Those who protest now at the incumbent Chief Justice’s alleged conflict of interest may well be asked as to where their outrage was when far more serious conflicts of interest were evidenced in far greater measure during that period, when the rot actually set in so as to speak? Are these matters that become relevant only when a Government is determined to crucify a Chief Justice? In any event and given the specific allegation leveled against the incumbent Chief Justice to which a full answer has been forthcoming from her, is this really an impeachable offence?
A range of weapons being used by the government

Another canard being floated by propagandists is that the Chief Justice is manipulating the benches of the appellate court in regard to matters connected to the impeachment.

On the contrary, it must be said that the Chief Justice has no authority whatsoever in the listing of judges to hear particular matters in the Court of Appeal. This is exclusively the prerogative of the President of the Court of Appeal. It is therefore absurd to contend that the Chief Justice is somehow capable of influencing the judicial response to the writ petition filed by her. What other recourse does she have, when subjected to a parliamentary process devoid of natural justice? The Court of Appeal’s initial response to this petition was, in fact, carefully guarded and entirely proper. It is hard to imagine as to what other order could have been handed down in the circumstances.

But to return to the larger issue of the quasi-dictatorship that we are inflicted with, it is simplistic to point to a newspaper on any given day and contend that the prevalence of opposing views indicates that democracy is yet present. Contrary views would be tolerated so long as they are marginalized and do not pose any real threat to the regime’s political stability.

Mere irritants would be dealt with through persistently crude and vulgar attacks which we see now while a range of weapons including targeted killings may be applied against more serious threats. The cacophony of hysterical voices using the state media to damn all those who advise a calmer rethink of the impeachment process amply bear this out.

A Government devoid of respect for the law

Now more than ever, public opinion is needed to support a braver and stronger institution of the judiciary that would grapple with the terrible challenges of the present as well as the profound failures of the past. What is at stake is not the fate of a single Chief Justice but the judicial institution itself. Some may argue quite justifiably that, in the past decade, the very concept of the independence of the judiciary has become worthless in this country. True, the integrity of the judicial branch may have become tarnished as a result of actions of former Chief Justices, as dwelt on in past columns. Further, the legal process itself may be deeply flawed in terms of its archaic rules, laws delays and general insensitivity to the litigant.

However, these entirely valid points of critique cannot be stretched so as to say that Sri Lanka’s judicial institution itself is not worth fighting for. Spruced up cities, the profusion of luxury hotels and gleaming new roads snaking throughout the country cannot disguise the fact that this is a Government devoid of any respect for law. Strategic wisdom is needed therefore for the long struggles ahead.
ST