Impeachment: We seem to be working in terms of retribution or, perhaps even more worryingly, intimidation. 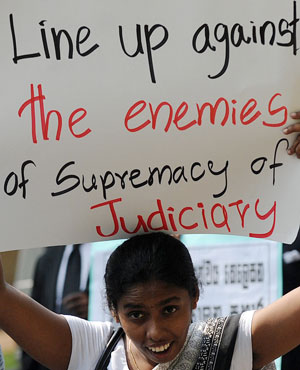 Prof.Rajiva Wijesinha M.P.
The recent decision of the President to seek further advice before deciding whether to proceed with the impeachment against the Chief Justice is most welcome. It suggests that he feels concern about the position to which various elements in government were propelling the legislature.

There is no doubt that there have been several misjudgments with regard to the treatment of the Chief Justice. It was certainly unusual that someone with no previous experience of the Courts should have been elevated to the Supreme Court, and I have even heard it said recently that this was designed to prevent the elevation of the then Secretary to the Ministry of Justice, who would in the ordinary course of things have become the first woman Supreme Court Justice. But she fell foul of the Minister, and did not receive her due, though all those working on implementation of the Human Rights Action Plan have found her more conversant with the law, as well as administration, than anyone else in government now.

Be that as it may, there is nothing intrinsically wrong with putting an academic on the bench, and in fact Mrs Bandaranayake’s judgments have generally been acceptable, with nothing as outrageous as that which emanated from a previous Chief Justice. However it should have been recognized that to fit her in on a par with others with regard to seniority was not particularly wise, if seniority on the Bench was the only criterion for being elevated to Chief Justice. Certainly, given the tender age at which she was appointed, it was inevitable that, if that were the only criterion, she would be Chief Justice sooner than later, and have a lengthy tenure.

Both before and after she was appointed Chief Justice, government appointed her husband to important positions. Sri Lanka has no clear guidelines about such matters, and the question does not seem to have arisen before with regard to judges, perhaps because previous judges with spouses willing to undertake government employment were male, and the question of providing an occupation for wives does not often arise. In this case, the problem was compounded by Mr Kariyawasam not being especially accomplished, whereas the positions he was raised to would ordinarily have required someone of advanced financial acumen.

Such appointments without rationale are not however uncommon in Sri Lanka, so government cannot be faulted for offering such positions, nor Mr Kariyawasam or his wife for his accepting them. The problem was compounded however when there was evidence of financial improprieties, which led to Mr Kariyawasam’s resignation from the National Savings Bank. Unfortunately the resignation came only when there were pressures both from within the Bank and from the political opposition, while no inquiry was instituted until after the Chief Justice was seen as making decisions not in accordance with the wishes of the government.

The speed with which government then moved, culminating in the impeachment effort, was remarkable, and created the clear impression that it was those decisions that had led to such a reaction, not the problems of propriety that had arisen. So the question of reform and regulations to prevent abuse has been forgotten, and we seem to be working in terms of retribution or, perhaps even more worryingly, intimidation.

Unfortunately those advising the President with regard to this issue seem not to mind what impression they create. If the President wished to deal with a Chief Justice whose judgments seemed to him prejudiced – and it could well be argued that the Chief Justice was being recalcitrant after her husband had been compelled to resign – then attention should have been focused on issues where clearly there were serious problems.

Unfortunately, the manner in which the impeachment resolution was drafted suggests more prejudice than principle. By piling on matters that on first principles do not amount to misconduct, those who drafted the resolution gave the impression that all this was part of a witch hunt, not a serious attempt to ensure that the judiciary abided by traditional norms. This impression was compounded by misleading statements in the House, as when the exercise of discretion by the Chief Justice in making an appointment to the post of Secretary of the Judicial Services Commission was described as unconstitutional. That the facts alleged were not accurate, and that there had been precedent for such an appointment, only confirmed the view that the aim was to hang the Chief Justice by any means to hand.

It is a relief then that the President has slowed down what seemed a grindstone. One can only hope then that he finds senior figures with judicial or legal experience who will advise him in a balanced fashion with regard to the report of the Parliamentary Select Committee, as well as the various issues that this controversy has raised