Impeachment of the Chief Justice, did she get a fair trial?

Some citizens including lawyers have filed petitions in the Court of Appeal seeking writs restraining the Parliamentary Select Committee (PSC) from inquiring into allegations mentioned in the impeachment motion submitted to Parliament by some Members of Parliaments (MPs). The Court of Appeal has referred them to the Supreme Court (SC) since there is a constitutional problem involved. In the meantime some fundamental rights (FR) cases have also been filed in the SC stating that the Standing Order 78 (A) violates FRs under various articles of the constitution. Having considered these applications a panel of three judges of the SC has issued notices to the members of the PSC. And everyone knows now that the Speaker has made an order to the effect that no court could issue process on the Speaker or any committee appointed by him. However the SC has decided to go ahead with the inquiry.
Let us take our memory back to the impeachment inquiry select committee appointed by the Speaker to impeach Neville Samarakoon the then Chief Justice (CJ). Mr S. Nadesen QC who represented the respondent CJ took up a preliminary objection that standing order 78 (A) is ultra vires the constitution and that the said select committee had no power to proceed with this inquiry because it violates article 4 (C) of the Constitution which stipulates that except in matters concerning Parliamentary Privileges the Judicial power of the people has to be exercised exclusively through the courts.

In its report at the conclusion of the inquiry a majority of members (five members) representing the government in the PSC writing a separate report dealt with the objection taken up by Mr Nadesan as Follows. “ While the members of the committee have certain reservations regarding the validity of Mr Nadesan’s contentions particularly in view of the specific provision of Article 107 of the Constitution of the Democratic Socialist Republic of Sri Lanka , this committee feels that notwithstanding any objections it is duty bound to carry out the mandate given to it by Parliament according to the terms of reference specified. In carrying out this task the committee is fortified by the fact that the exercise of disciplinary power over the higher judiciary in a large number of countries almost without exception is a right which has been exercised by the Parliament. Furthermore under the standing order 78(A) Parliament exercises its power in the fulfilment of its duty under Article 107(3) of the constitution.

Submissions made by Mr. S. Nadesan Q.C. on behalf of Neville Samarakoon C.J. that “In a constitution such as that of our country, in which separation of powers is jealously protected , the Committee in seeking to go on with the inquiry as to whether or not Mr. Samarakoon was guilty of “proved misbehaviour,” was violating the provisions of Article 4(c) of the Constitution , which stipulates that except in matters concerning Parliamentary Privilege –the judicial power of the people shall be exercised by the courts.”

What is more significant in the present context is findings of the separate report of the three members of parliament, of the opposition namely, Sarath Muththettuwegama, Anura Bandaranaike, and Dinesh Gunawardane who happens to be a cabinet minister and the leader of the House in the present government.

Their separate report states “Although Mr. Nadesan’s arguments have considerable cogency they were unable to come to a definite conclusion on that matter. Therefore they urge H.E. the President to refer this matter to the Supreme Court for an authoritative opinion thereon –under Article 129(1) of the Constitution” Moreover the separate report goes onto state that “The signatories to this statement however feel that the procedure that Parliament finally adopts should be drafted along the lines of the Indian provisions where the process of inquiry which precedes the resolution for the removal of a Supreme Court judge should be conducted by Judges chosen by the Speaker from a panel appointed for this purpose. We therefore urge the House to amend Standing order 72A accordingly.” It is not difficult to understand how. Dinesh Gunawaradane MP who took up the said strong position against the Standing Order 78A in their separate report in the Neville Samarakoon impeachment inquiry did a completely somersault in the present impeachment inquiry against the incumbent Chief Justice. 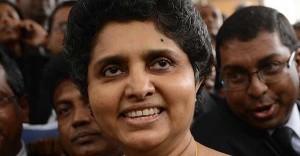 It is important to look at the procedure stipulated in the Constitution to impeach the President of Sri Lanka. Under Article 38(c) of the Constitution once a resolution is passed by not less two-thirds of the whole number of members (including those not present) voting in its favour, the allegation or allegations contained in such resolution shall be referred by the Speaker to the Supreme Court for inquiry and report. It is common knowledge that the Supreme Court holds such inquiry observing all fair trial and due process guarantees applying accepted rules of evidence.

In India, The Judges Inquiry Act of 1968 provided for the impeachment of higher court judges. Provision of this section is read with Article 124(5) of the Indian Constitution. This was later developed further by the New Judicial Standards and Accountability Act 2012.

Once when the impeachment motion is submitted to the Parliament , the speaker of the Lokh Sabha refers the allegations to the above panel who will go through it and if they find the charges are not well founded they will inform the Speaker accordingly and the matter ends there. If they find that one or more of the allegations merits inquiry they will hold a judicial inquiry guaranteeing all fair trail and due process rights to the responded Judge. At the end of the inquiry if they find that the charges are proved they will submit the report to the Speaker of the Lokh Sabha. Thereafter the resolution for impeachment must be adopted by both houses of Parliament i.e. Lokh Sabha and Raja Sabha by a two third of MPs, including those not present.

It is clear therefore from the above example how fair, the impeachment procedure of Judges are under the respective legal systems.

As the great jurist John Rawls has stated “Justice is fairness.” A politician according to him is one who cannot by his very nature “divorce his political interest from his judgement.” This truism of Rawls apply aptly to the seven members of the PSC. The ratio of appointing members of the PSC according to the party strength in the Parliament violates the principles of equality before the law. Ours is a Parliament which always votes politically. It is impossible to expect a different attitude from them. In a Parliament which is totally subservient to the President none of the seven members will never vote against the wishes of the President.

In Sri Lanka where the Jury system still prevails in criminal trials, the jurors are elected by a lottery. The accused person facing trial can object to any number of jurors on various grounds. But in the impeachment inquiry of the Chief Justice of Sri Lanka the majority of judges as well as jurors are the MPS of the governing coalition whose verdicts are predictable beforehand.

Now the people in Sri Lanka as well as the world over are aware that the Chief Justice walked out of the PSC in protest of the hostile, biased and scurrilous conduct of the latter. Her lawyers have stated, according to media report that the Chairman of the PSC had stated that no oral evidence would be led to establish allegations and hence no opportunity of cross examination of such witnesses would be granted to respondent’s lawyers. It was evidenced to lawyers that the accepted natural law principle that“those who alleged must prove” has being shifted to the responded.

John Amarathunga, one of the four MPs who sat in the PSC told the Washington Post that the four of them walked out of the sittings of the committee because they could not be a party to an unfair process. He has stated further the government members using their numerical majority rejected what they said were reasonable demands to establish a procedure for the inquiry and to give Dr Bandaranayake an opportunity to cross examine the accusers and enough time to pursue the three hundred documents relating to the case. He further stated that too many of the accusers and judges in the case were from the same group – government law makers, whereas in other countries such inquiries were assigned to separate legal professionals appointed by Parliament. He further stated that government law makes treated Dr. Bandaranayake in an insulting and intimidating manner and their remarks clearly showed they already found her guilty. The same newspaper reported that the US State Department spokesman Mark Toner as saying , “US is Deeply concerned about actions surrounding the impeachment trial and urge the government and ensure due process. These latest developments are part of a disturbing deterioration of democratic norms in Sri Lanka including infringement of the independence of Judiciary. He called upon the government to uphold the Rule of Law.