Impeachment of the Chief Justice as being one giant step taken by the present government to control the judiciary – S.L. Gunasekara 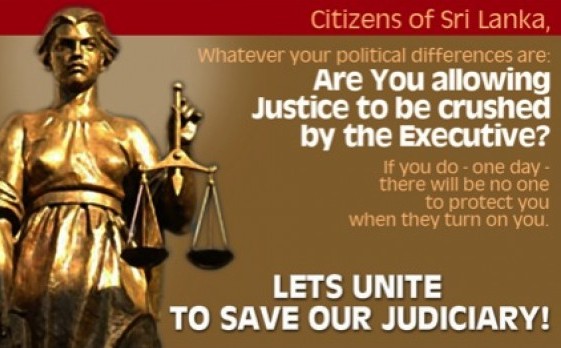 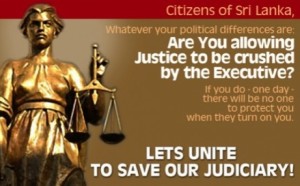 ”I see the Resolution for the Impeachment of the Chief Justice as being one giant step taken by the present government to control the judiciary and/or bring it under its heel and/or destroy its independence. This fact was firmly confirmed by a statement made by a coterie of ignorant ministers [two of whom were `purchased’ from the UNP in the not too distant past] who held a press conference after the last sitting of the purported Select Committee and are alleged to have said that the judiciary should lay off and/or keep their hands off Parliament.SRI LANKA: Impeachment motion – Letter to the President, BASL”

Here is full text of the letter sent to the President of the BASL, Mr. Wijedasa Rajapakse, issued by Mr. S.L. Gunasekara, reads as follows:

As you are presumably aware, I am not and was never an unqualified admirer of the Chief Justice. Indeed, I was one who publicly opposed her appointment as a Judge of the Supreme Court way back in 1996 and expressed my views forthrightly in a television `talk show’ on TNL. At the same time I was and continue to be a supporter of the present Government, not because I have any illusions about it’s claims to perfection or competence etc but for the simple reason that I cannot see a credible alternative thereto or any persons/set of persons who is/are in any way suited to take over the reins of power from Mahinda Rajapakse and his government. That is solely by way of introduction.

Despite the aforesaid I am deeply concerned about the Resolution for the Impeachment of the Chief Justice which is currently being inquired into by a purported Select Committee. My concern is not for the CJ personally – I believe that if she has misconducted herself &/or behaved in a manner unbecoming of the holder of her office she must go or be dismissed. However I am very strongly of the view that she must have a fair trial and given a fair opportunity if defending herself. As things stand, I have no doubt that she will get neither because now the whole `impeachment process’ has become a political exercise with some despicable clowns who, to our Country’s sorrow and shame, are MPs sinking so unbelievably low as to sign an `impeachment resolution’ that contained no charges leaving it to the `managers’ of the `drama’ to insert what charges they like !!!

I see the Resolution for the Impeachment of the Chief Justice as being one giant step taken by the present government to control the judiciary and/or bring it under its heel and/or destroy its independence. This fact was firmly confirmed by a statement made by a coterie of ignorant ministers [two of whom were `purchased’ from the UNP in the not too distant past] who held a press conference after the last sitting of the purported Select Committee and are alleged to have said that the judiciary should lay off and/or keep their hands off Parliament.

This to my mind is nonsensical. The issue with regard to judicial intervention in the impeachment process revolves round the question of whether Standing Order 78A is or is not ultra vires the Constitution. The Standing Orders of Parliament, it must be remembered, do not constitute law. Had they constituted law the Courts would have been powerless to intervene or pass any judgment with regard to the Impeachment process. At the same time, had the provisions contained in Standing Order 78A (which is the impugned Standing Order) been incorporated in a Bill as a prelude to making such provisions a part of the law of the land, that Bill would have had to be gazetted consequent to which the Bill for the introduction of such law which would have to be submitted to the Supreme Court for a determination whether it needed to be passed by a 2/3 majority or by a 2/3 majority and approved at a referendum. Accordingly, any law providing for the procedure of trying a judge of a Superior Court on a resolution for his/her Impeachment would be subject to judicial review prior to enactment. Standing Orders however, are essentially internal rules of Parliament governing its debates and they do not have to be scrutinized by the Supreme Court prior to their enactment.

Thus, the warning given by the coterie of ministers to the judiciary to keep their hands off Parliament which was uttered vis-à-vis the several actions pending before the Supreme Court in respect of the vires of Standing Order 78A and hence the appointment of members of the Select Committee was ominous. It would mean for instance that Parliament would not tolerate any Court declaring to be invalid, a Standing Order which, to take a hypothetical example, decreed that any person who criticizes a Minister or the President should be subject to a death penalty. This of course is an extreme example but one cannot rule out the occurrence of such an extreme eventuality, particularly in the present day.

These, I believe are matters of which the Bar Association should educate the public. They should also educate the public about the fact that if the Government succeeds in subduing the judiciary they would be at the receiving end of a stooge judiciary when they are out of power. It would be stupid for them to presume that they would remain in power for good. I believe that is a delusion under which several dictators laboured till they were thrown out.

I realize that adopting such a course of action would be fraught with danger, particularly to the person who proposes it and those who take the lead in executing it. However, such dangers are as nothing when compared to the dangers to the entire populace of living with a `stooge judiciary’ and hardly anything worthwhile can be achieved without some measure of sacrifice. While devices like instituting actions and organizing/sponsoring demonstrations will only bring publicity, I cannot see them being effective. Indeed such demonstrations could result in counter demonstrations [such as that which we witnessed today -28.11.12] which could only result in the further demeaning of the judiciary and/or the position it holds and/or should hold in the minds of the People.