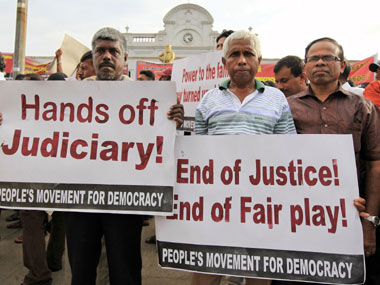 If anybody, other than the rights-sensitive civil society of Sri Lanka, has a right to get offended by the island nation’s decision to impeach its first woman chief justice, it is India.
For, the impeachment is aimed at getting rid of somebody who will prevent the country from going back on its commitment to India on the devolution of power to its Tamil areas.

If chief justice Shirani Bandaranayake continues in her post, it won’t be easy for the Rajapaksa government to usurp power of the provinces, particularly the Tamil dominated north and east.
India always bragged about the 13th amendment, the instrument that will devolve more power to the Tamils in Sri Lanka. President Mahinda Rajapaksa promised former foreign minister SM Krishna that he would even go beyond the amendment in his commitment to the devolution of power.

However, even during such assurances his government’s duplicity was evident in the proxy voices that said that the country was not interested in the provinces, or more precisely the north-east, becoming more autonomous. The proxies, at home and abroad, said that the 13th amendment would not work because it was an imported solution. Such imports were also an affront to the country’s sovereignty, they said.

This is where chief justice Shirani became a stumbling block. She recently asked the government not to take back the powers of the provinces without her approval. She said a new bill proposed by the ruling regime for this purpose should be cleared first by the provincial councils.
For the all-powerful Rajapaksas, who cannot brook dissent or difference of opinion, this was an unexpected bolt.

The solution was simple — get rid of her. With a brutal majority in the parliament, it has the numbers to strip her of her constitutional powers and send her home. The parliament has begun the process.

For a moment, imagine if such a situation arose in India. Or even in Pakistan!

If anybody thought Sri Lanka would mend its ways after the United Nations Human Rights Council resolution, they are mistaken. While the international community continues to put pressure on the country to improve its human rights standards and fix accountability for its alleged war crimes, it has become more defiant. With the decision to impeach chief justice Shirani, it has once again cocked a snook at the international community, and more importantly its own citizens.

Chief justice Shirani is no pushover. She is highly regarded for her erudition, scholarship and integrity. But the government thinks that her conduct and behaviour has “affected the sovereignty of the people” because she, well within the rights of the country’s judiciary, has asked valid questions.

The Sri Lankan government’s impeachment decision is a foreign policy failure for India. Whenever political parties and civil society groups from Tamil Nadu asked for its intervention for an equal and dignified life to the Tamils of Sri Lanka, New Delhi had always brandished the 13th amendment.

But now, with the proposed bill to take back powers of the provinces and the impeachment motion against the chief justice, it’s clear that Sri Lanka was bluffing with India.

India hasn’t yet reacted to the issue. Impeachment of the chief justice is entirely a domestic issue for Sri Lanka, but the motive and its aftermath cannot be glossed over.

Although it is extremely dangerous to protest or express dissent against the Rajapaksas in Sri Lanka, the impeachment decision has aroused widespread protests. People have taken to the streets in Colombo and independent commentators have slammed the government because they know that this will be the last nail in the coffin of the country’s democracy.

Ever since Mahinda Rajapaksa became the president of the country, his family has been slowly tightening its grip on the country. Now, the four Rajapaksa brothers literally run Sri Lanka — the oldest one is the president, while the other three are defence secretary, minister for economic development and speaker respectively.
Obviously, the Rajapaksas have made Sri Lanka a better best practice, than India, on how to establish an autocratic dynasty in a democracy.
First Post