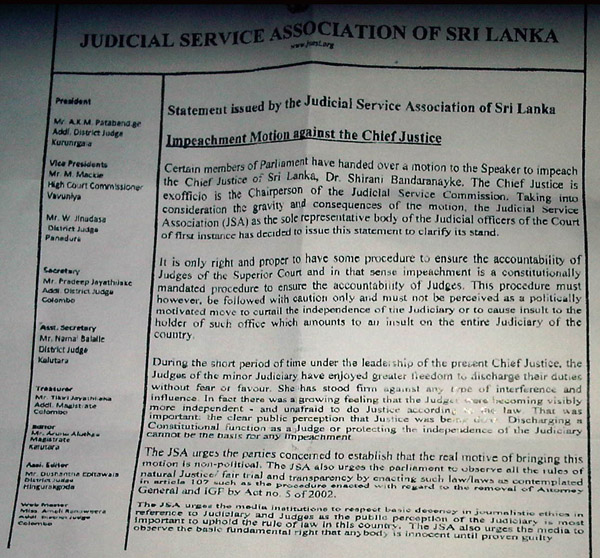 The release of the Sri Lanka Judicial Service Association pertaining to the Impeachment Motion against the Chief Justice tabled in Parliament yesterday (06) was not published by many media outlets because of political influence, according to a UNP MP.
According to this release, Magistrates and District Judges have indirectly stated therein that the Impeachment Motion has been politically motivated, thereby insulting the independent judiciary throughout the island.
It is only right and proper to have some procedure to ensure the accountability of judges of the Supreme Court and in that sense, impeachment is a constitutionally mandated procedure to ensure the accountability of judges. This procedure must however, be followed with caution only and must not be perceived as a politically motivated move to curtail the independence of the judiciary or to cause insult to the holder of such office which amounts to an insult on the entire judiciary of the country, the release states.
If it so happens it endangers the independence of the judiciary and is an affront to the independent judiciary throughout the country.
It also states that no impeachment should harm the action of the judges who are dedicated to the independence of the judiciary.
For an impeachment process to be a just act, all parties should act in an open, disciplined manner states the release.
During the short period of service of the Chief Justice, the judges of the lower courts were content with performing their duties without any influence it states. The release cautions media institutions not to insult the judiciary under the guise of a politically motivated impeachment motion. The judges have urged the media to protect media ethics of any person is innocent until proven guilty. 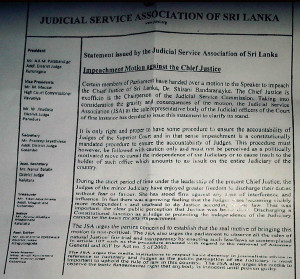