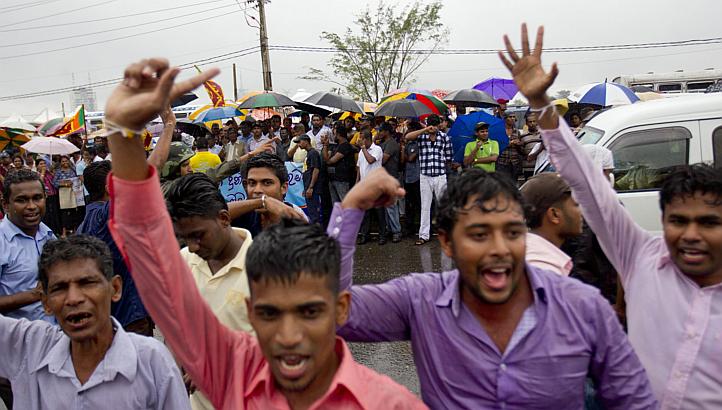 Dr. Jehan Perera
President Mahinda Rajapaksa has acted swiftly after the impeachment of Chief Justice Shirani Bandaranayake by Parliament to issue a Presidential decree that removes her from office. This letter has been delivered to the Chief Justice. However, there is considerable support from the legal fraternity that she remains Chief Justice regardless of the Presidential letter. This is on account of a Supreme Court ruling that the impeachment process was not in conformity with the law. A group of leading lawyers has said, “The Lawyers Collective categorically reiterates that Hon. Dr. Shirani Bandaranayake remains the Chief Justice, notwithstanding being unconstitutionally removed.” What will eventually transpire in the days ahead is unclear.

along with their compatriots but chose to abstain. These included Prof. Tissa Vitarana who headed the All Party Representatives Committee that formulated a political solution to the ethnic conflict at the height of the war. Others included the leader of the Communist Party, D E W Gunasakera and Liberal Party leader Prof Rajiva Wijesinha who has been one of the most eloquent defenders of the government on other controversial matters.

Parliamentary Select Committee. The President said that he was considering appointing an independent committee to advise him on the next steps. This was in the context of the Appeal Court and Supreme Court taking the position that the findings of the Parliamentary Select Committee were a nullity in law. The appointment of an independent committee to advise the President would have given a breathing space, and cooling off period, in which there could have been sober discussion about the possibilities of a compromise solution.

The President’s decision to go ahead with the removal of the Chief Justice in hasty circumstances can be best explained in terms of the insecurities felt by the government leadership about a zero-sum game, in which one side must lose all. After the government and judiciary collided it has became virtually impossible for either side to back down. If the government had backed down, it would have given the judiciary the opportunity to take action on a number of outstanding issues, including instances of corruption, abuse of power and even regarding human rights violations that took place during the war. On the other hand, having ruled that the impeachment process is outside of the law, the judiciary also cannot accept a process that gets rid of its head in an extra-legal or illegal manner.

An issue that could be causing considerable anxiety to the government is the assertion by the UNP that it would go to the courts and take legal action against those MPs who won election on the UNP ticket on the proportional system, and later crossed over to the government side. In reality they no longer represent the voters who once voted for the opposition. Earlier Supreme Court decisions denied the right of the UNP to sack their members who crossed over to the ruling party. This enabled the Government to obtain a two-third majority in Parliament. The UNP has now taken the position that these crossover MPs violated a party call to vote against the impeachment. A newly assertive Supreme Court, conscious of the grave harm that this artificial two thirds majority in Parliament gives, may take steps to remedy this situation. The loss of the 16 crossover MPs would deal a major blow to the government and strip it of its 2/3 majority which it has been using to steamroll its way in the political decision making.

The most important feature of a democratic system is the integrity of its institutions. The government decision to override decisions of the Supreme Court at its discretion, will lead to the judiciary becoming another administrative department of the government to carry out its decisions rather than go by the intrinsic merits or otherwise of the matters in issue before them. In this context there is an increasing fear that Sri Lanka may be heading towards a failed State situation where there is no Rule of Law or supremacy of the Law and the Constitution. Sri Lanka is therefore in a constitutional crisis even though most people in the country may be unaware of this.

Already mobs have celebrated the impeachment outside the Chief Justice’s residence. Earlier mobs with clubs in their hands also threatened and assaulted protesting lawyers and civil society activists in the presence of the police who stood by. Photographs of these ugly incidents were published in the media. There is cause for grave anxiety that the ground is being laid for non-democratic processes to gain strength. It is ironic that in attempting to decapitate the Supreme Court, by removing its head, the importance of the judiciary as a check and balance on the abuse of power has also been revealed. If the legitimacy of the national judiciary and Rule of Law is not speedily restored, the case will grow stronger for international judicial interventions in the internal affairs of the country.

There may be no doubt that life in Sri Lanka in general has improved after the end of the war for which the government can claim credit. However the undermining of public institutions is bound to make this improvement unsustainable in the longer term. Where the Rule of Law breaks down, it is inevitable that mob rule will eventually prevail. It is reported in the media that the President had approached several eminent legal personalities and even sitting judges to take on the position of Chief Justice, but so far without success. The Bar Association has decided not to welcome any new Chief Justice appointed under these circumstances. It would be judicious if the President were to try and get a consensus amongst all political parties and the Bar Association regarding the future of the judiciary.