Impeachment: JVP view – This is a report of the ‘royal’ family, don’t accept it 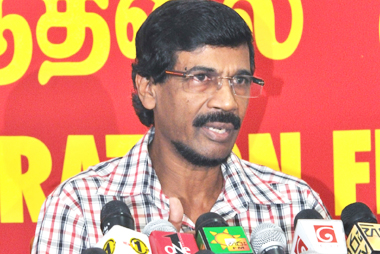 What was forwarded by the PSC is not a committee report but a report of the ‘royal’ family compiled by those henchmen who are prepared even to wash pots and pans of the ‘royal’ household, says the General Secretary of the JVP Tilvin Silva. He said this at a press conference held at the head office of the JVP at Pelawatta today (9th) morning.  Speaking further Mr. Tilvin Silva said, “The government has handed over a document to the Speaker regarding the impeachment motion brought by it against the Chief Justice and is attempting to end the process with it. This is a very serious matter.
The government is attempting to abolish the little bit of democracy that has been left for the common man in the country.  The Ministers who participated in the PSC tells the media distorted versions and attempt to justify the undemocratic move. Hence, we believe the masses in this country should know the truth about it.

Bringing in the impeachment motion against the Chief Justice is not a chance happening. It is a result of the arbitrary, undemocratic and despotic process of Mahinda Rajapaksa, his family and the government of bulldozing any individual or institution that hinder its dictatorial path. It is indeed not a process to clean up the institutions or the governing machine. For, if it is necessary to clean up the process, it should have begun first from the family, then the Parliament and the cabinet. There are many in the Rajapaksa family, the government and the cabinet who have been charged with various frauds and corruption charges and there are those who have plundered public money. The impeachment motion was brought as they couldn’t cow down the Chief Justice. The government was under the impression that she would resign. However, the government had to have an investigation as she decided to defend herself and explain matters. Hence, it is very clear the impeachment motion came to light due to several judgments given by the judiciary. It is because the judgments given by the judiciary obstructed the unconstitutional, anti-peoples, undemocratic regime maintained by Rajapaksa. The government is carrying out an administration that crushes and destroys all that opposes it. Such individuals and institutions are terrorized and suppressed.

The JVP decided to participate in the Parliamentary Select Committee considering the serious consequences of the impeachment motion. The JVP never believed that the PSC would be justifiable or fair. The committee continued for about a month. There was no fairness or equity in the committee. The committee only had to publish a decision that had been already taken. The decision was taken by the ‘royal’ family not by the committee. The government thought getting opposition members to agree with the decision would be ideal. However, the government did not even listen to what the opposition members had to say. The members that represented the opposition requested several times to give them the list of witnesses. They also asked to explain the methodology or the procedure of the impeachment process. However, the government making various excuses avoided doing so. The lawyers of the Chief Justice too inquired regarding these two matters. They were not given any explanation as well.

The committee did not have any methodology or procedure to explain. The government’s intention was to have meetings for names sake, insult the Chief Justice and create an environment so that she would resign. If the Chief Justice had committed any offence the government could have duly investigated it. It could have been carried out within the committee without taking it before the country.

However, the government asked the opposition not to talk about it but used its media such as ITN and National Rupavahini to take a dialogue regarding it to the country. Derogatory leaflets were printed regarding the Chief Justice; posters were put up and agitations were held deploying henchmen. Meanwhile, Mervin Silva asks the Chief Justice to resign. If the CJ has to resign when Mervin Silva says so what’s the point of having a committee?

The Chief Justice was not given any justice. Even the rogue who steals a cluster of plantains gets an opportunity to defend himself. However, the Chief Justice of the country is not given an opportunity to defend charges against her. As such, she had to protest against the process and stop participating in committee sessions. The attempt by the opposition to have a fair process was rejected by members of the committee representing the government. As a result the four members representing the opposition decided to withdraw from the committee. The JVP decided to withdraw from the committee as we didn’t want to be a party for the unjustifiable decision the committee was going to take.

The government took advantage of the withdrawal of the members of the opposition. The government forced its committee members to continue the sessions at night on the 7th and completed the process of compiling the report. They brought down dinner from the Hilton and prepared the report until the next morning. This is the first time in history such a report was completed in such a short time. The government would not have such an interest for any programme on behalf of the masses.  However, this is not a report of a committee. It is a report of the ‘royal’ family. It is a report compiled by those henchmen who are prepared even to wash pots and pans of the ‘royal’ household. This is why the investigations were completed so hastily. The government is scared of carrying out a just investigation. This is why Mahinda Rajapaksa spoke to the lawyers representing the Chief Justice and forced them to influence the Chief Justice to resign.

Our country has been dragged to a very precarious position.  We wouldn’t like to take this issue in isolation. This is not an issue cropped up regarding Dr. Shirani Bandaranayake or the judiciary. It is an issue regarding the attempt to abolish and destroy democracy. Hence, political parties should not have second thoughts regarding rallying against this move. We ask the masses in this country to consider this as an omen of the catastrophe the country would confront and rally to defeat it.

Mahinda Rajapaksa commenced his second term in office with a certain plan. He is attempting to crush and destroy democracy and carry out a despotic administration as required by imperialism. Since the presidential election in 2010 he has carried out undemocratic administration. He bought Parliamentarians and built an illegal 2/3rd majority in the Parliament. This 2/3rd majority was used not to change the anti-people constitution but to abolish independent commissions in the 17th amendment that had traces of democracy and adopted the 18th amendment that gave him all the powers and enabled him to be in power for ever. Now Mahinda Rajapaksa is not scared of the masses or people’s power. He wants to control the land, the sea, the air, the Parliament and the Judiciary system under him. The conflict developed when he attempted to take the judiciary under him. This is a process that harms the country massively. It is an attempt to bury the judiciary.

The people of our country will be denied the opportunity to get justice. They would lose the opportunity to seek solace from the judiciary. The masses do not get any relief from the President or the Parliament. Only the judiciary was left. When the 18th amendment was adopted the JVP said about its viciousness. However, many did not believe us. However, now all are realizing the seriousness of it. It is so with this situation. Several months may pass when all realize the precariousness of the move. However, it would be too late then to correct the process.

On the other hand this government harms the country internationally. It gives opportunities for imperialists to interfere in our affairs. This government that has packed it with pseudo- patriotic stooges and Mahinda Rajapaksa are respondents of imperialist interference in the country.

At the summit of Human Rights Commission a motion was adopted against Sri Lanka. It was recommended that LLRC recommendations should be implemented. At such a time the government should act to defeat imperialist interferences. However, when the judiciary is harmed and destroyed imperialism would not recognize the judiciary in the country. The government is making room for them to interfere.

The idiotic government is playing with the future of the country. The country and the masses are put into jeopardy by trying to take personal revenge. There is a bunch of ministers who hail this idiocy. There were such people in the past as well. They are the people who said ‘We would eat hay if Mathiniya tell us to do so!” There is such a bunch of people now as well. It is they who insulted the Chief Justice at the behest of Rajapaksa.

The JVP is not hesitant regarding this issue. We are taking a firm stand. We have no interest to protect individuals. We represent democracy in the country. We would never give up the struggle. The government may think that the issue is over. The night does not end with one dream. The final decision is given by the masses.  Masses have that right. They should be made aware of this.  They should be brought to a state so that they could take a decision regarding this government. Mahinda Rajapaksa and Co. is bringing to crisis the system they are being nurtured. There is a saying that law is the wish of the ruling class. The law in Sri Lanka has become the wishes of Rajapaksas.

This committee was set up for the need of Rajapaksa family. The report compiled by it is one that has been made to fulfill the needs of Rajapaksas. The JVP does not accept this report. This is why we withdrew from the committee. We call upon all citizens of this country not to accept the decision of the committee. A just and impartial investigation should be held regarding allegations brought against the Chief Justice. The JVP distributed leaflets, held seminars and agitations against this sordid move. We would continue to take all measures to defeat this undemocratic, despotic regime.

The Information Secretary of the JVP Parliamentarian Vijitha Herath and the Member of the Political Bureau K.D. Lal Kanthe also participated.
LT