Impeachment: From a farce to witch hunt 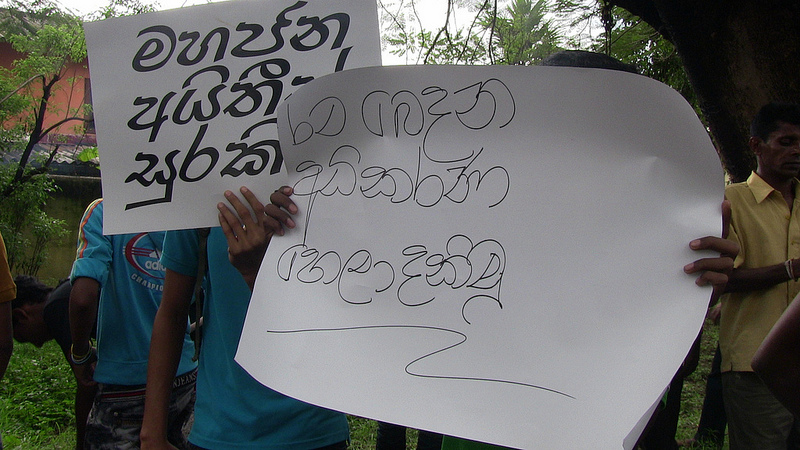 Today was declared by the lawyers a day of protest against the impeachment process which is ignoring the request by the Supreme Court to delay the proceedings until it inquiries into a constitutional question referred to it by the Court of Appeal requesting legal opinion. Meanwhile, local and international pressure has also widened and the government has been told in very clear terms that any impeachment must be preceded by a genuine inquiry by a competent and impartial tribunal. The government is also being told that aninquiry by a Parliamentary Select Committee would not meet this requirement. However, the government is blatantly ignoring the criticism against the manner in which it is proceeding and has begun to resort to street tactics in dealing with this all-important constitutional question.

Today, while lawyers, religious dignitaries and others gathered to show their solidarity with the Chief Justice and protest against the blatant violations of the constitution by the government, the government has responded by bussing in people to shout slogans against the Chief Justice. According to reports about 500 Special Task Force (STF) personnel were sent to the premises of the Superior Court Complex. The STF is a paramilitary unit working under the direction of the Ministry of Defence. The task of peace keeping belongs to the civilian police and not the paramilitary groups such as the STF.

Yesterday (December 3) the judges of the lower courts, that is the Magistrate’s Courts to the High Courts, gathered at the official residence of the Chief Justice and held a two-hour consultation with her and declared their support. It is clear from the statement of the judges that they perceive the impeachment as an attack on the independence of the judiciary. In the joint statement of the judges they stated that the impeachment proceedings are being conducted in violation of the respect owed to the Chief Justice and the judiciary. They also pointed out the unbecoming behaviour of the media. They stated that such behaviour of the media amounts to contempt for the court. By such contemptuous expression, not only is the Chief Justice being brought into disrepute but it also affects the respect for the courts and thereby contributes to the collapse of the rule of law. They also stated that the inquiry against the Chief Justice should be done impartially and with transparency. They went on to state that the inquiry by a body that includes seven persons from the government violates natural law and blatantly violates all legal considerations and that nowhere in the world would decisions on such matters be made in this manner.

Thus, what is now taking place is a clear confrontation between the judiciary as a whole and the government. On the one hand the Supreme Court has granted leave to proceed in several cases and fixed inquiry into the cases referred to it by the Court of Appeal. On the other hand all the lawyers of the lower courts have gathered and clearly indicated that they have begun to perceive the threat to the independence of the judiciary.

Under these circumstances any government would have heeded public opinion and take appropriate action in order to ensure that whatever action is taken is within the law and would in no circumstances infringe the basic guarantees of the independence of the judiciary. Such a rational reaction was to be expected as the matter involved is of the utmost seriousness and the attention of the whole nation is now focused on this issue. Besides, the international community is clearly watching and the matter at stake is of the most sensitive nature in terms of international relationships.

However, the way in which the government is reacting does not show much regard for these important considerations and instead seems to rely entirely on muscle power in determining the outcome of this most important constitutional issue.

This does not come as a surprise as the government has drifted from a democratic form of governance to the governance of a shadow state. This shadow state relies more on the security apparatus that is the paramilitary forces, intelligence services and the military rather than the democratic institutions. In fact, the democratic institutions have ceased to function independently and are controlled by the presidential secretariat.

Everything else other than the presidential secretariat and the Ministry of Defence seems to have become irrelevant. Naturally the security apparatus in all critical moments brings in mobs and criminal elements to counteract people who express their democratic aspirations by way of peaceful demonstrations.

For this shadow state the independence of the judiciary is an obstacle. The shadow state requires the kind of ‘judiciary’ which will merely carry out its orders. Legality and constitutionality are matters that have no relevance to the functioning of this shadow state.

Under these circumstances the government is now engaged in a witch hunt against the Chief Justice as well as all the judges who demonstrate any attachment to the independence of the judiciary. This witch hunt will also extend to all independent lawyers. As we have pointed out in the past the rule of law is now rapidly being displaced by direct government control without regard to the law.
AHRC