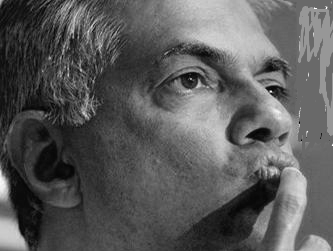 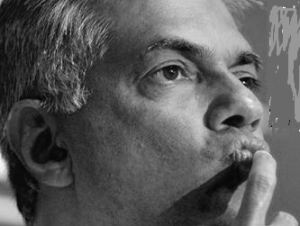 In a move that is seen as historic as the impeachment motion against the Chief Justice that was passed with a two-thirds majority in Parliament on Friday, Leader of the Opposition and the United National Party (UNP), Ranil Wickremesinghe, chose to remain silent through the two days of debating.
Several members of the UNP admitted their leader did not utter a word during the debate, although he had reneged on a deal struck with the opposition parties to boycott the debate and the vote on the impeachment, and decided to participate in the debate and the voting. They also accused Wickremesinghe of not taking any timely action over the impeachment motion.

Wickremesinghe’s revealing silence comes on the heels of growing speculations over his shifting allegiance favouring the Rajapaksa regime, and his theatrics over the protest march from the Supreme Court Complex to Parliament, planned by a group of lawyers, to protest the impeachment motion.

According to informed sources, Wickremesinghe, while discouraging the march to Parliament, the supremacy of which he earlier backed, had also demanded that if he is to participate, he should be allowed to lead the march and should also get the credit for its success. However, in a pattern that is becoming increasingly familiar, Wickremesinghe had not participated in the protest march either, leaving his trusted sidekick, Tissa Attanayake, to make the excuses.

The debate on the report by the Parliamentary Select Committee (PSC) appointed to probe allegations mentioned in the impeachment motion signed by 117 members of the United People’s Freedom Alliance (UPFA) was held on 10 and 11 January.  The debate began two hours later than scheduled, as the opposition and the government engaged in a verbal duel on the technicalities of the procedure.

Although, Wickremesinghe earlier joined the argument over the technicalities and claimed Parliament must follow the due course outlined in the Standing Orders, which specifies one month time after the submission of the report, which had not been tabled in Parliament, he however, avoided making any comments for or against the impeachment motion, during the debate.  The omission had taken many by surprise, for given his constitutional acumen, his avowed commitment to democratic freedoms, and his role as the Leader of the Opposition, he was deemed the ideal person to argue the case against the government motion.

UNP Western Provincial Councillor, Shiral Lakthilaka, said a golden opportunity to flay the government was unfortunately wasted, due to Wickremesinghe‘s double standards, over the impeachment motion against the Chief Justice.

He pointed out that the opposition could have taken a strong stance and supported the pro-Chief Justice faction, if Wickremesinghe had motivated and handled the party members well and accused Wickremesinghe of being involved in a conspiracy to clandestinely support the government’s moves. “This is what we call hunting with the wolf and sleeping with bunnies,” he said. UNP Puttalam District Parliamentarian, Palitha Range Bandara, said Wickremesinghe had also boycotted the protest organized in Hulftsdorp on Friday (11), demanding that the impeachment be revoked or a fair trial be conducted against the Chief Justice.