Impeachment Crisis Helped the Easy and Comfortable Passage of the Budget which had the Potential of Causing Riots. 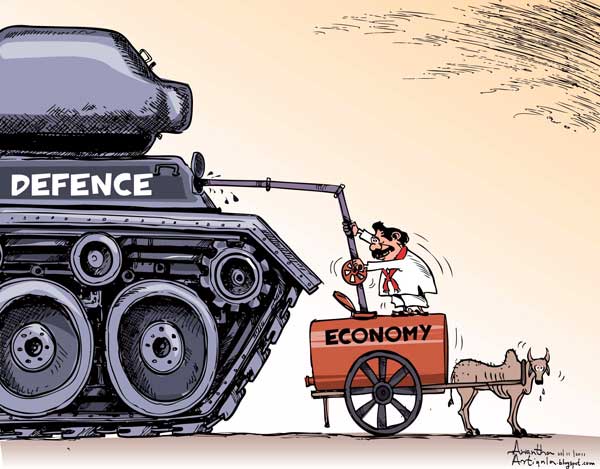 Gamini Weerakoon
What’s happening to the country?
This is a question frequently posed by thinking people and even those who do not think. This is the question we were contemplating in our thinking chair, the hansiputuwa, on Thursday morning but no ready answer was forthcoming.
There was the ‘War’ which we were told would end all our troubles but even after three years defence expenditure is gobbling most of the income – Rs 231 billion – 23 per cent more than last year. Everything is going up in price but no one seems to care.

There is a Sri Lankan satellite now up in space – we did it before the North Koreans sent it last week – but fortunately this one was not at the cost of the tax payer but by a foreign investor, we are told. But how is this country going on from crisis to crisis? We pondered.

From crisis to crisis

Three years ago the ‘War’ ended. After that there was a national crisis on who won the ‘War’: Sarath Fonseka or the Rajapaksa brothers? Fonseka, the Army Commander who led the army and was described soon after the victory as the ‘Greatest army commander in the world.’ But soon after that he was sacked and jailed.
It was a grave political crisis but the ruling party organised playing raban, kiributh gobbling throughout the island and staging victory parades.

Then there was the presidential declaration: Patriots are those who are with us. Others are traitors.
We can’t keep track of the events but a major crisis occurred when we plunged into the ‘War Crimes’ debate and the UNHCR moves made at Geneva. Dayan Jayatilleke, the new Ambassador in Geneva at that time led Lanka to a spectacular victory but soon Jayatilleke was back at home at his lectures in the Colombo campus. He had stepped on the toes of an almighty person. Needless to say, you can’t prevent rubber bouncing back and so has Jayatilleke and now he is in ‘Gay Paree’.

Then Sri Lanka in the second Geneva round took on the mightiest of the mighty, the US of A, and was roundly trounced. Patriots roared against neocolonialists, imperialists and western hypocrisy, etc. causing national consternation.

We will be back at Geneva next March and will there be another crisis?

Yes, Sri Lanka has been going from crisis to crisis. We took on India whom we looked on as our Godfather. We spoke and supported not only the 13th Amendment , produced and directed in New Delhi but pledged even to enact 13 Plus – whatever it meant. Then the Indians dealt us a resounding slap at the second round in Geneva and we have not been offering the other cheek as good Christians do but griping and threatening to end the 13th Amendment while abolishing provincial councils. In the meantime we are embracing the Chinese.

Local crises we simply cannot keep track of. There were suspects killed at police stations, people surrounding and attacking the stations; ‘Grease Yakkas’ emerging from the dark and embracing women from down South to the Jaffna peninsula, trade union protests and a FTZ worker being shot dead by the police; fishermen in Mannar demonstrating on roads and protesting against fuel hikes which ultimately led to the Mannar Courts Complex being stormed and the magistrate threatened. There was the showdown between two SLFP strongmen and leading politicians and their gangs at Himbutana with one person being killed and the other being shot through the head.
Crises keep churning out by the day. Contaminated fuel being imported not once but twice; hedging by officials familiar with cricket statistics dabbling in international finance costing billions to the nation; the famous Z-Score controversy affecting tens and thousands of innocent students; leakage of question papers and more.

Reflecting on all these crises – there were much more which we couldn’t recall – we realised the secret of Lanka’s survival. This was our Eureka moment like that of Archimedes. Only thing different was that we did not drop our sarong and sprint down the road like Archimedes did in his birthday suit when he discovered the Law of Specific Gravity, shouting ‘I have found it, I have found it’. We celebrated our discovery quietly with a sip of the Golden Water of Life.

Our discovery was: Sri Lanka survives because of the continuous cycle of political crises – an incoming crisis knocking out from the public eye the existing crisis and after some time the existing crisis being knocked out too by another. And life goes on with the nation forgetting what happened the week before.

What escapes the attention of most Sinhalese is that the main problems affecting the daily life of the people are forgotten in the heat of these political crises. In bad old times the rise in the price of rice, flour or sugar by a few cents brought protestors on to the streets. Remember the Hartal of 1953 when the hike of rice by a few cents caused violent demonstrations and a few people were shot dead by the police. It led to the resignation of Prime Minister Dudley Senanayake.

In contrast the price of a loaf of bread has risen from Rs 3.30 in Chandrika’s time to more than Rs 50 today. But has there been a whimper of protest? People have been blowing out their fuses, developing apoplexy on TV shows over political issues but ignoring their pangs of hunger and even that of their children.

We are now in the throes of the biggest political crisis in recent times, the impeachment of Chief Justice Dr Shirani Bandaranayake. And this has helped the Rajapaksa regime getting over the biggest financial crisis it has faced. The budget for 2013 was passed a few days ago, heaping terrible burdens on the poor and the middle class as never before. Indirect taxes placed on essential commodities of the people have sent prices sky rocketing. But the people were far more concerned about the impeachment of Dr Shirani Bandaranayake and the budget was passed in parliament without much fuss and bother.

Dr Shirani Bandaranayake’s impeachment helped the easy and comfortable passage of the budget which had the potential of causing riots.

What if political crises fail to materialise in the Sri Lankan political scene in the future? Simply ask Vermin and his son to attack some innocent people and the whole country will rise against it, make a terrible fuss and forget about it next week.

We have seen that happen quite often. That’s what Vermin is there for.