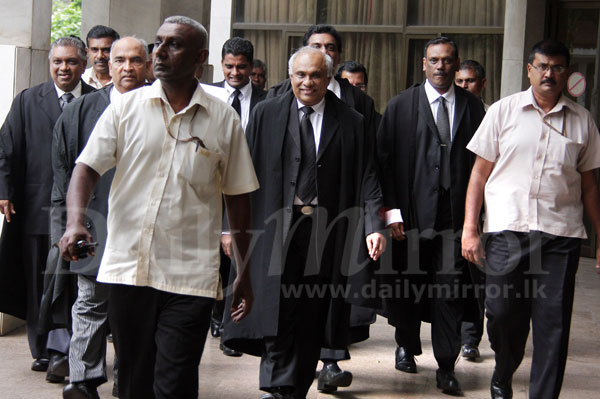 Monday, 07 January 2013
The Court of Appeal issued a writ quashing the Parliamentary Select Committee report on the impeachment motion against Chief Justice Shirani Bandaranayke and its findings.
The President of the Bench Justice S. Sriskandarajah with Justices Anil Gooneratne and A.W.A. Salam concurring delivered his judgement on the Writ application filed by Chief Justice Shirani A. Bandaranayake against the seven PSC members who found the petitioner guilty of three charges made in the impeachment motion against her.
The Court of Appeal quashed the findings of the report of the seven ruling party members of the PSC in view of the Supreme Court’s determination on Article 107(3) of the Constitution which was delivered last Thursday.

The Court held that it had jurisdiction to look into this matter and it had the power to exercise judicial review on findings provided by the Constitution. Therefore this power cannot be abdicated by the other arms of the government namely the Legislature or the Executive.

Petitioner Shirani Bandaranayake in her petition filed through Neelakandan and Neelakandan complained that the functioning of the seven government MPs, following the withdrawal of the four opposition MPs from the PSC was unlawful and ultra vires the Parliamentary Standing Orders.

Counsel Romesh De Silva in his submission cited an observation of Chief Justice Abrahams in colonial times when the Attorney General of Ceylon appeared to defend the Governor General in a case, that the court is the only place of refuge for the citizen, said that it was imperative that court does what was right.

He said the inquiry was held in a manner that was lacking in terms of the requirements the failure to give a list of witnesses and documents, no proper time given to inspect reams of documents given with less than 24 hours to go through, denial of opportunity to cross-examine witnesses and the refusal to allow independent observers.

He highlighted the inordinate bias on the part of the government members of PSC. Clearly, the accusers, prosecutors and judge were all the same contrary to all norms of a proper, fair and impartial inquiry.

He said the PSC acted deviously by informing the CJ and her lawyers that no witnesses were being called and then surreptitiously calling 16 witnesses over the phone. Thus, steps were taken to deprive the CJ of a fair inquiry.

He said there was also procedural impropriety, in that there was no proper clear procedure adopted by the PSC. In fact, all steps taken to secure a proper process were refused and denied.

He said PSC member Rajitha Senaratne had grounds for bias, given that his wife had made a Fundamental Rights application which had been dismissed by a bench presided over by CJ Bandaranayake. Though this was pointed out Dr. Senaratne continued to be a part of the PSC.

Counsel M.A. Sumanthiran said everyone should respect and uphold the Constitution. He informed court that the Opposition members in the PSC had prevailed on Chairman Anura Priyasharshana Yapa that adequate time to respond to clear charges should be given to the CJ.

Thereafter, a 35 page ‘Report’ has been published in less than 12 hours. Mr. Sampanthan had protested when he heard of this shocking conduct.

He concluded that his client had warned the PSC Chairman that failure to respect Court rulings relating to Constitutional interpretations would lead to a breakdown of the Rule of Law, which would make Sri Lanka a ‘failed state’, which should be avoided.

Counsel J.C. Weliamuna said all issues (around 20) relating to the propriety of the inquiry were overruled. When a President is impeached, he has the protection of an independent inquiry by the Supreme Court. Why should a Superior Court judge be denied an impartial, fair inquiry meeting required judicial norms? The Supreme Court determination on the Constitutionality of Standing Order 78A is binding and accordingly, the Petitioner is entitled to the relief sought.

Attorney General Palitha Fernando appearing as amicus curiae on the request of court submitted as follows:

The Appeal Court should consider whether it has the jurisdiction to entertain this application. Article 4 of the Constitution grants the Parliament not only ‘legislative’ power but also certain other powers.

Removals of the President, Members of Parliament etc involve review of the Supreme Court. But the framers of the Constitution have deliberately left out the judiciary from the situation of impeachment of a Superior Court judge.

Therefore the Appeal Court should not review steps taken to impeach the Petitioner Chief Justice. Several cases such as Victor Ivan’s case refers to the need to maintain a balance of power between the organs of government which uphold that removal of Superior Court judges is a matter for the legislature to the exclusion of the judiciary.

The Appeal Court should refer the matter to the Supreme Court for interpretation as to whether Article 4(c) permits the Appeal Court to entertain this application.