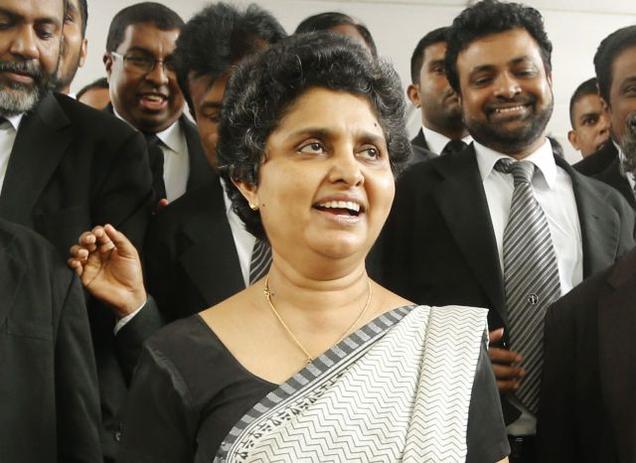 Marwaan Macan-Markar for the Hindu
There are questions whether the parliamentary select committee observed due process in its inquiry of the charges against Shirani Bandaranayake
There has been an air of inevitability in the current showdown between the administration of President Mahinda Rajapaksa and its latest bête noire, Dr. Shirani Bandaranayake. Her fall from grace shows that the Rajapaksa juggernaut does not warm up to dissent easily, even if, as in this case, it measures up to the expected norms of checks and balances in a self-described democracy.
The Parliamentary Select Committee (PSC), inquiring into the 14 charges of professional and financial impropriety listed the impeachment motion against her, rushed to bring its proceedings to an end last Saturday. Undeterred by the walkout by four Opposition parliamentarians, the PSC ruled that Bandaranayake was guilty of three charges of misconduct. Parliament, where President Rajapaksa’s party has more than two-thirds majority, is expected to vote on the committee’s findings in January.
Just 19 months after Bandaranayake was appointed with much fanfare as the first female to head Sri Lanka’s judiciary, the fate of the 43rd Chief Justice appeared to have been sealed following a ruling a she gave to a Bill introduced in Parliament by the Economic Development Minister, Basil Rajapaksa, one of the many presidential siblings controlling the levers of power. The Supreme Court ruled that the Bill, which wanted to empower the Central government to control a $614-million development budget, violated the constitution. The court added that it had to be first approved by nine provincial councils.
In early November, when 117 government parliamentarians handed over an impeachment motion against the Chief Justice to the Speaker of the legislature (Chamal Rajapaksa, another sibling), the process that followed affirmed how heavy the odds were stacked against Bandaranayake. The Sri Lankan constitution has ensured that the President and his ruling party hold all the cards in filing an impeachment motion, conducting a parliamentary inquiry and voting in the House to unseat the holder of such a hallowed seat as the Chief Justice.
An inquiry or inquisition?
But last Thursday, a dramatic twist was added to a predictable plot. After four hours of its third sitting, the Chief Justice and her legal team walked out of the government-dominated, 11-member PSC. Her lawyers said their client had “no faith” in the PSC and that it violated the rules of natural justice.
The walkout underscored the question on many minds: was the PSC an inquiry or an inquisition? The question stemmed from what Bandaranayake was subjected to that day. Not only was a procedure for the inquiry still to be spelled out, but the accused was given close to 1,000 pages of documents to respond to in a day, no witnesses were listed, no oral evidence would be permitted, cross-examinations would be denied and two government parliamentarians on the PSC heckled the beleaguered Chief Justice during the proceedings, calling her a pissu geni (“a mad woman,” in Sinhala).
Making bank accounts public
Such has been the haste to get rid of Bandaranayake that due process and legal consistency have both been given the go-by. In a now familiar political tactic of the regime, the government-controlled media held its own trial to vilify the latest enemy of the state. The state’s media have, for instance, repeatedly made public Ms Bandaranayake’s private bank accounts — a brazen violation of banking secrecy protected by law.
The state-run Daily News has been in the vanguard. Commentaries and reports in its pages have carried details of the alleged accounts Bandaranayake had and supposed amounts and transactions in each. Her private finances feature in two of the 14 charges in the impeachment motion (which implies that the 117 legislators who signed it have seen the bank accounts).
Such a display of impunity on a vital feature of the economy was not used even in the 30 years that Sri Lanka fought the Tamil Tigers. When government investigators wanted to follow the financial trail of Tamil Tiger operatives, a court order was often sought to access bank accounts, despite the Emergency laws in operation then and the Prevention of Terrorism Act.
Pakistan parallel
Given such political mud she has been dragged through, it is no surprise that Bandaranayake has won support from a broad constituency of jurists, lawyers, academics, activists and religious leaders. Some have now begun to draw parallels between her quest to defend the independence of the judiciary against an all-powerful President and the epic struggle between the Pakistan Chief Justice Iftikhar Muhammad Chaudhry and the country’s then military President, General Pervez Musharraf.
Chaudhary’s sacking triggered a protest led by lawyers that fast drew in others; he was eventually reinstated, and the movement was one of the factors that saw off Musharraf.
Unfortunately for Bandaranayake, such parallels are only in the realm of ideas. The number of supporters on her side is still very few and far from the required critical mass for a movement to defend the independence of the judiciary. Muscle and power on the streets are still controlled by the well-oiled Rajapaksa political machine.
If the inevitable occurs, and she is impeached early next year, Bandaranayake’s plight would affirm who the real winners are in a post-war country trying to promote itself internationally as a “Wonder of Asia.” It would clearly not be those who think that the judiciary has a legitimate role in reining in unbridled political power through a system of prescribed checks and balances. Bandaranayake’s successor is sure to be acutely aware of the political sword dangling over his head.
(Marwaan Macan-Markar is a Sri Lankan journalist covering South Asia and Southeast Asia for an international news agency.)
The Hindu
Share
Facebook
Twitter
WhatsApp
Pinterest
Email