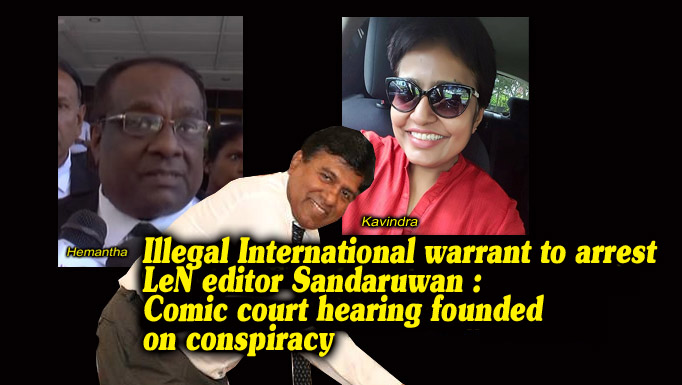 It was further confirmed that Sri Lanka’s minister of justice Wijedasa Rajapakse is acting with ulterior and conspiratorial motives when blabbering and bluffing in Parliament. The minister said, the independence of the judiciary is being undermined while also attempting to repudiate the lucid exposures made against the courts of Sri Lanka that they are delivering unlawful and capricious judgments to suit the needs and agendas of minister Wijedasa , and some others.

Gampaha magistrate Kaveendra Nanayakkara last Friday (25) issued a red alert warrant to arrest Lanka e news editor based on charges of contempt of court . She also ordered that the warrant be given effect to with the assistance of the Interpol. At the same time an order was issued to the Controller of Immigration and Emigration to arrest Sandaruwan Senadheera when he returns to Sri Lanka (SL)

Kaveendra also said Senadheera has committed contempt of court , and under that indictment ,a case shall be filed in the appeal court .The reason adduced by her in support of that decision was : Lanka e news had published a photo of the prime suspect Premananda Udalagama before the identification parade was conducted, in the criminal assault case in which Upali Tennekoon , the Rivira editor was the victim.

What is most intriguing and perplexing about the comical decision of this court jester magistrate is : she who deemed it right to release the suspect Premananda on bail earlier on who was identified by the victim as his assailant being released on bail by this same Kaveendra earlier on , now issuing an Interpol warrant against Lanka e news editor just because he published the photo of the suspect. Mind you , Premachandra whom Kaveendra released on bail is also the prime suspect in the most brutal murder of editor Lasantha in broad daylight .
Capricious trials and erroneous judgments

It is pity in SL because of judges like Kaveendra, the sacrosanct judiciary has become a stage for most ludicrous and ridiculous dramas where travesty and mockery of justice are most manifest.

Lanka e news which had nothing to do with the Rivira Editor’s assault case being dragged into it, just because Kaveendra bore an inveterate grudge against LeN for bitterly (justifiably of course ) criticizing her earlier on.

Kaveendra also made inimical and adverse comments in her face book against Attorney General (AG) in respect of his decision given against elephant rogue Thilina Gamage, another judge.

Lanka e news which always champions the cause of justice and truth ,frankly , fearlessly and forthrightly pointed out her grave mistake , while also criticizing her for publishing her photographs in various striking poses and with come hither gestures in the face book and making a huge din inviting responses and saying ‘thank you.’ Lanka e news criticized these as unbecoming of a judge and are most befitting for a whore.

Indeed LeN made a complaint via its reports to the JSC about those who are disgracing the bench by such obscene and untoward conduct. Obviously Kaveendra who was stung by the truth bore a deep seated grudge against Lanka e news. The decision of hers against LeN in the Rivira editor case with which LeN had nothing to do was to avenge the exposures made by LeN against her. In support of her decision , the evidence she relied upon was an anonymous letter purportedly received by her.

In much the same way as a police officer cannot examine an anonymous letter, a magistrate too cannot. When that is the true position, who is the idiot sending notices to LeN during the last several months? On top of this she gave irrelevant orders to the CID to question the chiefs of the Institution.

While this is the factual situation , on the 25 th , when the case was taken up for hearing , Hemantha Warnakulasuriya suddenly made his appearance . At his request , Kaveendra transferred the case to the appeal court while stating contempt of court has been committed by publishing the photograph of the suspect who allegedly assaulted the Rivira editor , prior to conducting the identification parade . She thereafter issued an Interpol warrant and blamed the CID for not trailing the LeN.
How the troika degraded the court to a clown’s circus

1. A judge against whom LeN has mounted charges hearing a case against LeN is wrong primarily. The basic tenet of justice is, one cannot hear one’s own case . Hence there has been a serious miscarriage of justice in our disfavor.

2. If by publishing ahead the photograph of the suspect who assaulted Upali Tennekoon , we have enabled Upali to identify the suspect and that is a wrong , then the CID which publicly revealed a sketch of the face of the suspect before us has also committed a crime. Moreover , the photograph we published was copied from the internet . Mind you that photo had been published much earlier by the SL government. That was a photograph taken of the accused during a function when he was previously working in a foreign Diplomatic mission . In that case Kaveendra should instruct to file a case of contempt of court not against us but against the government .

In these circumstances , when photographs of criminals of the world are published seeking assistance of the public to apprehend them , Kaveendra will be issuing a warrant to arrest those who published as having committed contempt of court like how she did with regard to us. Based on the stupid notion of this judge ,the criminals should be those who have never before taken photographs.

3. Another grave lapse committed by Kaveendra’s ignorance is ,an Interpol warrant can be lawfully issued only to the CID at their request , and not to any other Institution or individual .That too is only following the CID’s investigation and based on its progress necessitating the arrest of the suspect ,after producing evidence in court .That is done on the AG’s advice.

In addition the CID must state to court the suspect is needed for further investigations and request court to issue a warrant . In this instance , Kaveendra has conducted herself worse than a judge of a Kangaroo court , for these procedures have not been followed . The CID has not conducted an investigation against LeN , nor AG’s advice along with valid grounds were forwarded.

The hilarious part of this travesty played out Friday in Kaveendra’s (Kangaroo) court was , an Interpol warrant was requested from Kaveendra not by the CID , rather by Hemantha who made his sudden appearance in this case .

The magistrate does not have any right whatsoever to issue an international warrant in such circumstances. Therefore Kaveendra has abused her powers flagrantly either based on her ignorance of the law (which is a serious offence specially if it involves a judge ) or with ulterior motives. The JSC ought to commence investigations into this immediately against her.

4. Another grievous illegality committed was , before an Interpol warrant is issued , an ordinary warrant shall be issued against the accused, and the Police should have also informed court it is not able to issue such a warrant . Besides it must be confirmed that the suspect is absconding court .

If Kaveendra has actually issued notice on Lanka e news in connection with the publication of the photograph of the criminal , we were in the ready to appear in court pertaining to the Rivira editor assault case, and prove our innocence. Instead , this troika ,Wijedasa , Hemantha , Kaveendra after depriving us of that opportunity , and denying true justice hatched a most evil conspiracy to issue an Interpol warrant against us.

5. Kaveendra only after delivering the order that a case shall be filed in the appeal court against Lanka e news for committing contempt of court , issued the Interpol warrant .This is absolutely wrong. Kaveendra despite being a judge (or is she?) was ignorant of the basic legal tenet that if a case is transferred to the appeal court , thereafter it is only the appeal court that can issue the warrant.

It is most imperative and important that the JSC takes a decision in regard to the illegalities and lapses besetting this reckless and ruthless judgment , and ensure that the rights we are entitled to are protected and promoted, so that genuine justice in its pristine purity will prevail .

Based on the aforementioned grounds , it is clear the International warrant issued against the LeN editor is not genuine. Certainly . this illegal process that was set in motion in parliament by the blabbering and bluffing Justice minister was carried forward by his lickspittles and lackeys . Such courts which act that way are not independent and do not contribute to the independence of the judiciary .

The Interpol that is located in France are above board unlike the Kangaroo courts . Therefore they do not pay heed to these warrants issued by courts which serve the aims and agendas of political scoundrels . They therefore probe into the genuineness of such warrants , and if it is found the warrant is bogus , the government will have to pay a huge compensation for the sins committed by conspirators.

Accordingly LeN sees these maneuvers and manipulations as a most crafty conspiracy of the satanic troika – Wijedasa , Hemantha and Kaveendra to achieve their selfish dastardly cheap media propaganda milestones. Obviously this is a political conspiracy.

The conspiracy of Wijedasa who is eating the very flesh of those on whom he is parasitic is seemingly successful. On the other hand , the ruling government can no longer say there is media freedom in this conspiratorial climate even though it may loudly and proudly espouse media freedom. This is because , already the international media had splashed these comical efforts to destroy media freedom in SL as headline news.

Those within the government who are screaming ‘we are being attacked via the social media’ must be desiring to achieve a particular result from these subterfuges . That is to convey the message to the legion of youths of the social media , ‘ okay now , we have given the blow to Lanka e news. You too be careful,’ and show the sword of Damocles is hanging over their heads.

It is for the government to decide whether it is still preferring to fall into the trap of the tie coat cutthroat Wijedasa the serpent who has insidiously crept into the government’s progressive plans and programs to put a spoke in the wheel ? or not? This decision should be taken now or never . Otherwise , may we warn, these villainies and sabotages under various guises and guiles of these double dealing ,double faced , double tongued rascals ,renegades and rogues could well mark the beginning of the end of good governance , and a most deadly turning point .

We are not ready to give in to or play into the hands of a few conspirators who are kindling the fire of devastation , and allow the hard won victory of 8 th January 2015 and thereby the freedom , Democracy ,and the restoration of the legal Institutions to be destroyed by these few to achieve their treacherous and traitorous aims and agendas.

Any ruler or group suppresses the media , not by openly saying ‘here we are , we are suppressing the media’ . Throughout history we have come across such villains and saboteurs who have masqueraded as great patriots and Democracy defenders only to finally lead the country into a holocaust. Hence we solemnly pledge that we shall carry on our crusade undeterred and undaunted , and fulfill our honorable undertakings in the future too on behalf of our motherland and the people.

(Unbelievably , from the moment the news report was out about the Interpol warrant against the editor , for 14 long hours all our phones were jammed by phone calls from callers who extended their unstinted support to us. In addition those who were most critical of the moves taken against us said , at the crucial moment they will steadfastly be with us unconditionally . LeN is deeply beholden to all of them who expressly and tacitly extended their support . LeN effusively thanks all of them .)

What caliber of a judge issued the Interpol warrant can be gauged by reading the news report captioned hereunder.