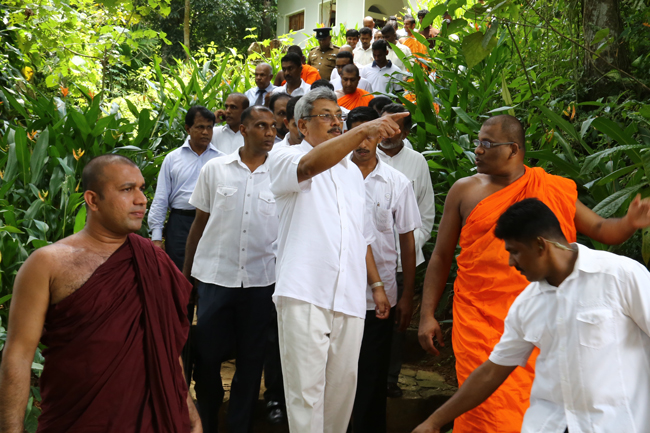 Tisaranee Gunasekara “Is there no asylum safe enough from your insane and blinded fury?” – Schiller (The Bride of Messina)
Gotabhaya Rajapaksa was the Chief Guest at the opening of Meth Sevana, the Buddhist Leadership Academy of the Bodu Bala Sena (BBS). In his speech Mr. Rajapaksa said that he decided to attend the event “after realising its timely importance”; according to him, “these Buddhist clergy who are engaged in a nationally important task should not be feared or doubted by anyone” (Sri Lanka Mirror – 10.3.2013).

Gotabhaya Rajapaksa’s decision to publicly associate himself with the BBS is of inestimable significance. Anti-minoritism is the creed of the BBS, cowing the minorities its raison d’être. Igniting an anti-Muslim Black July seems to be its ‘nationally important task’. When the über-powerful Defence Secretary, the man who controls the police and the military, gives a character certificate to such a violently divisive organisation, it is not a happy portent.

Even before Mr. Rajapaksa’s decision to bare his links with the BBS, its lay and ordained enforcers were able to break the law with near total impunity. After Gotabhaya Rajapaksa’s ringing endorsement, not a single police/military official is going to lift a finger either to restrain the BBS goons or to save their victims.
The transformation of the police from spectators to enforcers of the BBS illegal and unethical deeds is already underway, going by media reports. “After the discussion the Secretary of Defence today (13) ‘not only the removal of the Halal logo, the entire process is done away with it and the police has been directed to attend do the rest’ the Convenor of the Bodu Bala Sena, Galaboda Aththe Gnansara Thera told …… ‘Our doubts were all cleared during our discussion with the Secretary of Defence’ the Thera said. ‘The removal of products with the Halal logo from the wholesale market would have taken three years according to the manufacturers. It is not practical to wait that long. The police have been directed to remove these products from the wholesale market’, the Thera revealed. The IGP has been instructed accordingly”.

If accurate, this news portends a future in which the BBS will be able to wreak havoc at will, with active police/military backing – until Gotabhaya Rajapaksa decides to withdraw his patronage. The Rajapaksas are addicted to using and discarding. Eventually the BBS too will be marginalised into insignificance. But until that day dawns, it can cause limitless and irreparable damage to Sri Lanka and all her citizens.

The BBS may or may not be a Rajapaksa-creation. But it is hard to believe that it could have become the behemoth it is, in just 10 months, without Rajapaksa patronage. In today’s Sri Lanka, in order to get ahead and thrive, one needs Rajapaksa backing, be it in politics, business or other fields of endeavour. Had the Rajapaksas wanted, they could have nipped the BBS in the bud. The Siblings do not hesitate to ignore, restrain and even threaten the topmost Buddhist priests, when it is in their interests to do so. If they allow the BBS to run amok, it is out of choice.
The BBS, knowingly or unknowingly, is starring in drama of Rajapaksa making.

Under the auspices of President Rajapaksa, his brothers and sons are competing with each other to build up their own fiefdoms, within the overall dynastic project. Basil Rajapaksa is the ‘Development Czar’; the Divineguma Bill was aimed at expanding his fiefdom. Namal Rajapaksa has ‘Tharunyata Hetak’ and ‘Nil Balakaya’.

Gotabhaya Rajapaksa is indubitably more powerful than either Brother Basil or Nephew Namal. He effectively controls the military, the police and the UDA. The militarization of civil spaces is being undertaken partly as a way of maintaining his relevance, post-war. In post-war Sri Lanka, his power has remained undiminished. But what he can do with that power has shrunk drastically, outside of the North and the East.

Of course there are white vans and other extra-judicial activities. Of course he remains the most feared man in Sri Lanka. But in the absence of a discernible enemy and a manifest conflict, apart from lording it over North Eastern Tamils, his most prominent public role has been that of the chief park-and-exercise-track-builder and the inaugurator of the Ranaviru Real Star.

Perhaps the BBS can change all that, and enable Gotabhaya Rajapaksa to play the hero again, by giving the Sinhalese a new enemy? If the BBS can conjure a half-way credible ‘Islamic threat’, Mr. Rajapaksa can don his warrior-guise again and find some real uses for the unlimited power he enjoys in his brother’s country.

LTTE, BBS and GR
In Sri Lanka, several political entities have claimed the sole representative status of their ‘chosen people’, chosen on the basis of primordial identity – ethnicity/religion. The LTTE made that claim on behalf of the Tamils. The Rajapaksas make that claim on behalf of the Sinhalese. The BBS has taken over the JHU’s banner of ‘the sole representative of Sinhala-Buddhists’.

The perennial search for enemies undertaken by such entities does not stop with the ethnic/religious other. It often turns inwards, targeting those of one’s own race/religion who refuse to accept the worldview of the self-anointed ‘sole representative’. The Tigers considered anti-Tiger Tamils to be an enemy on par with (and at times even greater than) the Lankan state. The Rajapaksas often reserve their most vicious ire for those Sinhalese (the ‘anti-patriots’ according to the Siblings’ lexicon) who refuse to become their acolytes.
The BBS is no different.

When the All Ceylon Jamiyyathul Ulama (ACJU) announced its compromise solution to the BBS created ‘Halal problem’, several senior Buddhist priests lauded that decision. Prominent among them was the scholar-monk, Bellanwila Wimalaratana Thero who stated that the BBS is not the sole-voice of Lankan monks. “He noted that in any community there are extremists, fundamentalists and other elements. Bellanwila Wimalaratana thera said that the Buddhist clergy in Sri Lanka do not want to create a conflict between communities” (Colombo Gazette – 11.3.2013).

At its Maharagama rally BBS livewire Galagoda Atte Gnanasara Thero heaped invective on those Buddhist priests who disagree with the BBS’s extremist vision and divisive antics. After a violent verbal assault on Muslims and the Ulemas , the monk turned his venomous-attention on moderate Buddhist priests: “There are some Buddhist monks who are like those evil forces. They have the robe round their shoulders. But these fellows just lack the cap of the Muslim man. They sit with those capped men and are creating unlimited impediments to our attempts to build this nation….. Do not allow room in the temples for these unethical/immoral forces” .

Vellupillai Pirapaharan could have had a de facto Eelam on a platter. But he wanted to win a de jure Eelam on the battlefield. That extremist path brought him to an ignoble death. The BBS is not content with its ‘Halal victory’. It wants to inflict ever greater humiliations on Lankan Muslims. That extremism will cause its undoing, eventually. It ignominious fall may undermine its patron Gotabhaya Rajapaksa (and his brothers); or not. But its toxic life will indubitably bring disrepute, dishonour and disaster to the religious-community it claims to be the sole-representative of.
A clarification: I am not back with the Sunday Leader. The paper is carrying already published material, with strategic cuts.
*******************
i. http://theindependent.lk/news
ii.The Ulemas were likened to the ulama, a bird heralding death according to Sinhala folklore
iii. http://www.youtube.com/watch?v=WUPJ1tSrxgs