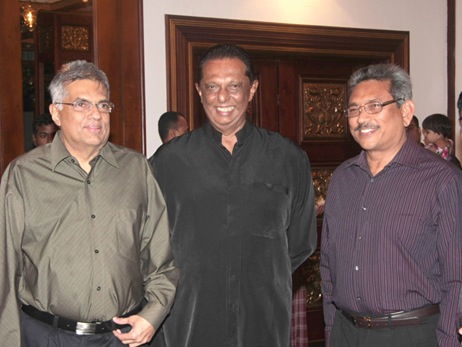 Image: Minster Amarathunga with his leader PM Wickremasinghe and Gotaghaya Rajapaksa who has allegedly ordered to kill journalists.

The International Federation of Journalists (IFJ) joins the Free Media Movement, Sri Lanka (FMM) in condemning the behavior of a minister towards journalists on June 8 in Kandana, Colombo. The IFJ demands an immediate apology from the minister.

John Amaratunga, Minister of Tourism Development and Christian Religious Affairs, threatened journalists when he was asked questions regarding an environmental issue at Muturajawela wetlands and the charge that people were blaming him for the garbage problem in at Bopitiya in Wattala. Furious over the questions, Amaratunga asked the journalists to leave.

“Do not report false news. Otherwise, I will beat you all to death,” the minister reportedly told the journalists. “Get lost. Just see the questions they are asking. If you do not know the facts it is better not to ask. We are the ones who have stopped it… You don’t try to teach me. I know it. Do not come through this gate hereafter. Please… It is enough now. Leave… you just leave!”

C Dodawatta, the FMM convener, said in a statement: “The FMM believes that such immature and violent behavior cannot be considered as a positive symbol of a better media culture and a healthy democratic future of this country. The foremost tool of the process of obtaining information for a journalist, which is the main mission of journalism, is questioning. The attempt to silence journalists who are making reasonable and professionally important questions is seen as an obvious threat to the process of free information flow.”

The FMM further added: “The Minister threatens the journalists using offensive terms and obscene words. Obstructing journalists who are involved in reporting incidents that matter to the public, can be considered as a hindrance. Several similar incidents were reported recently and apparently, the lack of law enforcement over such incidents has made the situation worse.”

The IFJ said: “The IFJ condemns the behavior of a minister in Sri Lanka who when provided an opportunity to answer allegations against him threatened journalists. Questioning is a journalist’s basic rights and it should be not breached by anyone. The IFJ demands an immediate apology from the minister and urges the Sri Lankan government to ensure such incidents are not repeated.