If there is anything more seriously alleged against Sri Lanka, it is the failure to tolerate dissent 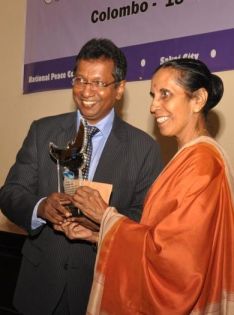 Ven Sirs, Excellencies, friends, ladies and gentlemen
It’s with mixed feelings that I have got up to speak.  I am pleased, honored and humbled to accept this award and to join the long admired and respected past recipients.  Let me at the very outset thank the board & the Governing Council of the National Peace Council and its staff, in particular its Chairman Mr. Tony Senewiratne and the Executive Director Dr.  Jehan Perera, for selecting me for this award. In fact, I was pleasantly surprised with the award. I am so pleased that some very special persons were able to come and share this evening with me.  I greatly appreciate presence of all of you.

With my somewhat unsafe and challenging experience for half a century, I thought of using this opportunity to share with you some of my observations on the complex challenges our society now faces, and offering my thoughts on them.

To go back to a few decades, I was in primary school when the 1971 insurrection struck the South, when we saw dead bodies floating in rivers. I recall very well the 1983 July riots, which I witnessed in Colombo, where a large number of Tamils were killed and their property destroyed, followed by the notorious 6th Amendment, chasing the Tamil political leadership away from the main stream of politics. Disappearances, dead bodies and destruction continued in late 1980s and beyond.   Then, we saw bloodshed all over the country – mainly in the North and East – in a bloody conflict, where thousands died, disappeared, tortured and imprisoned.  This is what my generation witness in our youth.

Between 1989 & 1993, as a young lawyer handling quite a large number of legal aid – pro bono – cases, I appeared for thousands of victims of human rights abuses – Sinhalese and Tamils alike beyond geographical, religious or ethnic boundaries. I had the opportunity of interviewing hundreds of detainees for the purpose of documenting and preparation of their cases. Among them were hundreds of torture victims whose fateful experience speaks volumes of our nation- our values, our society, our politics and how we treat our own citizens. If we are to learn about life, contemporary politics, governance, rule of law or humanity, probably those dreadful and heartbreaking experiences of victims and their families will give us the correct version of the foundation of our society and our nation today. Present day screams of thousands of families of forceful evictions and displacements, in the guise of development, building hotels, military camps and beautification will tell us the unashamed disregard to ignore the governance and basic socio-economic rights of our own people.  It is those unforgettable experiences that kept me asking the purpose of my life and gave me the determination to stand up for certain values.  I do not mind failing – in fact I have had enough failures – but I cannot afford not to try and do something about it.

I also had the opportunity of closely working with and, sometimes initiating  several networks, locally, regionally and globally. Among them were student movements, trade unions, rural-based community organizations, media groups, anti-corruption movements, human rights groups and – more recently –  lawyers’ movements and protection networks.  Transparency International, global and local, was among my strongest affiliations.  What I clearly saw, with my experience in those networks is that human rights, governance, accountability, rule of law, moral and ethical standards are all interconnected and interdependent.  In my view, even the ethnic conflict, resulting in major violations of human rights by all sides, demonstrates the stark reality of collapse of governance structure of our country.

I do firmly believe that no institution is capable of meeting expected objectives without determined individuals at leadership level, with a committed vision for integrity. Integrity of individuals is as important as Institutional integrity.  I refused to accept that formal education and qualifications alone give that integrity to an individual; they need to cultivate more within. If you disagree, please look at the present day University administrations and Regulatory Bodies in Sri Lanka, which have been ruined due to the appointment of such low level folks.

I also see the close connection between abuses of human rights and corruption. In fact,  today, we can, with concrete evidence,  strongly argue that the worst forms of corruption such as kleptocracy, is a crime against humanity. It is not difficult to conclude that ruthless terrorists as well as authoritarian regimes are on par as regards corruption and abuses of human rights. They have no respect for well established principles of rule of law. On the contrary, they want a captive population to respect their will as the rule. They are perhaps the greatest threat on establishment of a decent democratic and peaceful country.

From my childhood, I was influenced by different individuals, teachers, friends, philosophers and leaders, who had different ideologies. I was  influenced by street dramas of Gamini Hattotuwegama,  work of  Sucharitha Gamlath, the greatest judge of our times,  Justice Mark Fernando  and Parliamentarian & lawyer Sarath Muttetuwegama and,  for a long time, by my mentor and my senior RKW Goonsekere.  I can give a long list of such excellent individuals.

I also have long list of admirers – and for  decade I have admired  Voltaire to Martin Luther King, Lord Buddha to Jesus Christ, Gandhi to Nelson Mandela;  it took quite some time for me to frankly realize that there is nothing called unadulterated or pure ideology, theory or religion and that no one great vision is less superior to the other. Those great leaders live in our hearts and guide us on peaceful and unarmed liberation. Fortunately, I was never a prisoner of a particular political ideology and I deliberately took the path of civil liberties, knowing very well the risks involved.

The civil liberties are too precious to let go and we cannot let the state agencies and elected leaders to be our “sole trustees” of those liberties. They are co-partners of the civil society in protecting civil liberties and the day political leadership claim supremacy over individual and collective liberties of the society, we allow them to destroy us. It is quite easy for a bunch of leaders to manipulate a system of governance, unless the society is determined to collectively oppose it. We face this challenge today more than ever before. How do we foil this at this 11th hour? I believe the only way to do it is to speak out loudly about it, to resist it and to offer alternatives. Open discussion, debate and expression of views – fearlessly – is the only answer.   For this, I am prepared to stand in the firing line and take any risk in life.

If there is anything more seriously alleged against Sri Lanka, it is the failure to tolerate dissent and often we are called “a rogue state”. It is our collective duty to remind our leaders that we should not be “a rogue state”.  We often boast about traditions and say that the quality of our nation should be judged by how we venerate our teachers, elders, monks & priests, bosses and leaders.    A nation cannot be accurately judged by how it treats the powerful and the highest level of individuals but by how it treats the lowest, the helpless, the opponents and the minorities.

Let me also briefly share with you my observations on Sri Lanka’s potential to overcome her major challenges. In my view, we can reach any global standard on social, economic or any other indicators, if we tap three opportunities or prospects, which are readily available in abundance.

Let me be a bit unconventional on this.

Firstly – tap the diversity. We have diverse cultures, communities, religions and disciplines but we do not see this diversity as strength and often reject such ideas with prejudices.

Secondly – tap the human resources. We have precious human resources – not only for employment purposes but to safely extricate our nation out of the mess. This will be a reality, only if the willing and able are not discriminated and are guaranteed  of their due place.   It is time that Sri Lanka honestly welcomes thousands of individuals and their families,  who were made to live in exile due to the conflict. I have no doubt that a greater portion of those individuals, particularly Tamils, are willing to return, if they are reassured of a lasting reconciliation, guaranteeing with dignity.  We urgently need to engage in credible initiatives for this.

Thirdly – tap the commitment & dedication of the people. We have a quite a large number of committed individuals in the wilderness, who can guide our nation to establish a courteous civilization. They are not connected to power.  There are also millions of people who are committed to establish an ethical society, provided they have the freedom to do so, without political restraints and reprisals.

However, to tap these three prospects, the leadership of the country – not only political leadership but religious, societal and community, corporate, media, academic – needs a paradigm shift. In my view, it is our duty to prepare the society for that shift. It will not fall on to our lap. When things are most awful in our respective fields, there is no better solution than to stick to the basics.

Finally, a word to those who are totally disappointed about our country because of economic insecurity and not having a future for their children. It is not for me to blame you.

You have many options; but I have a duty to request you not chose the option of leaving the country, without first making your contribution to make this place worth living for generations to come. Before taking such a decision, please think about the free education that you have received, without which most of us may not have been here in these positions today. Here I did not talk about who are compelled to live in exile or those who migrate for other reasons.

As I close, I would like to once again thank the National Peace Council, for giving me this award. Thank you Dr. Ariyaratne for your kind words. My parents who are now deceased, continue to live in my thoughts. They never interfered with my choices, but always guided me to be where I am today. I had many friends but most of those who stood up with me against the tide had rough times in their own lives as well; our interactions were mutually enriching, for which I am grateful to all of them, though I do not have time to name each one of them.

My wife Subodhya’s understanding, and tolerance, which my young children are also fortunately beginning to learn, has helped me to sustain my commitment for a shared vision to make this place worth living.  For this big thank you to my wife.

Thank you all once again for coming over and sharing this memorable evening.