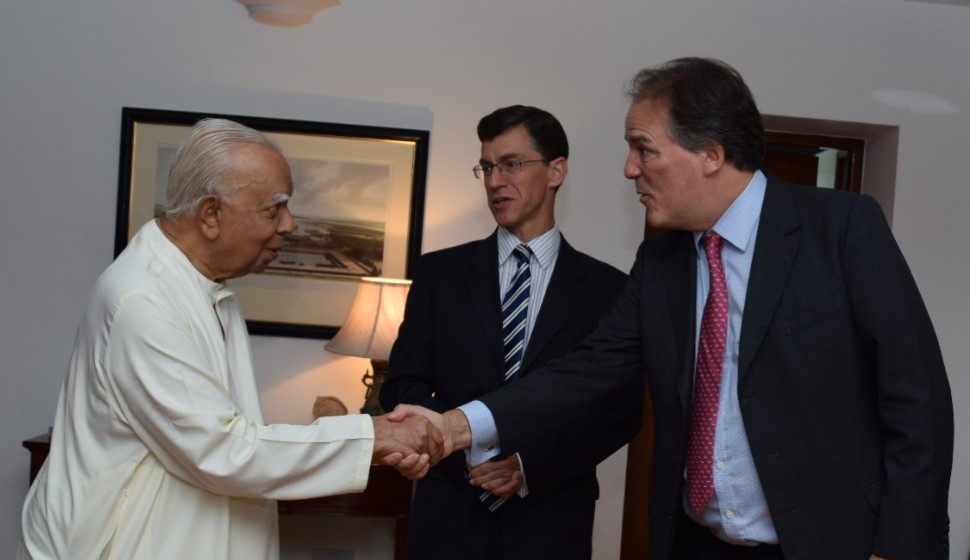 In his discussion with  visiting UK Minister of State for Asia and the Pacific Rt. Hon. Mark Field TNA leader R.Sampanthan has  said that if  Sri Lanka  fail in in finding a resolution to the national question through a new constitution there will be a recurrence of  violence.  Sampanthan has also highlighted the need for the Northern and the Eastern provinces to function as one province given the fact that the two provinces represent largely Tamil speaking communities.

The Press Statement issued  bu the TNA  after the meeting between TNA Leader and the visiting UK Minister of State for Asia and the Pacific Rt. Hon. Mark Field follows:

The visiting UK Minister of State for Asia and the Pacific Rt. Hon. Mark Field met with the Leader of the Opposition and the Tamil National Alliance Hon.R. Sampanthan today (04.10.2017) at Westminster House in Colombo.

Detailing the current political situation to the Honorable Minister Mr. Sampanthan said that the Tamil National Alliance genuinely participated in the processes of framing a new Constitution. Highlighting the Constitutional making process Mr.  Sampanthan said from 1957 onwards there had been various attempts made to recognize the pluralism in this country, but unfortunately, none of those efforts came to be realized.

“The need for a power sharing arrangement has been in discussion over 30 years since 1957.  Only in 1987 with the involvement of Indian Government for the very first time a power sharing arrangement was recognized in the constitution of this country Mr. Sampanthan said. “From that time, onwards steps were taken by every successive Government to address the National question and evolve a final solution” he added”.

The TNA leader said “we are seeking an arrangement that will enable people to exercise powers related to their Social, cultural, economic, and political matters based on the principle of sovereignty of the people as citizens of this country.  The TNA leader also stated, “that this power should not be taken back in anyway”.

Speaking further Mr. Sampanthan Highlighted that need for the Northern and the Eastern provinces to function as one province given the fact that the two provinces represent largely Tamil speaking communities. Further Mr. Sampanthan said “Majority Sinhala community need not be afraid of the merger of these two provinces as there will be a constitutional protection preventing any move towards separation. The power-sharing arrangements will be worked out within a United, Undivided and Indivisible Sri Lanka Mr. Sampanthan pointed out to the Minister.

Framing a new Constitution is an important task in finding a resolution to the national question Mr. Sampanthan said we can’t fail in it if we fail there will be a recurrence of violence he added”. Speaking of the consequences of the violence in the past Mr. Sampanthan said, “fifty percent of the Sri Lankan Tamils live outside the country” and if we don’t find a lasting solution more people will leave the country he cautioned.”

Answering a question regarding the role of the diaspora members Mr. Sampanthan said that the Diaspora is adopting a pragmatic approach, they too would like to see an acceptable resolution to this issue”

Mr. Sampanthan highlighted the importance of the role of the International community at this very important juncture of this country and said “that the United Kingdom must take all efforts to support these processes to see a positive end” and also to ensure that the Government of Sri Lanka delivers on urgent matters like release of private lands, issue of Missing persons and Political Prisoners.

The Minister assured the TNA Leader of the constructive engagement of the UK government and wished the TNA leader all success for all his efforts in framing a new Constitution.  Along with Minister Rt. Hon. Mark Field the United Kingdom ambassador to Sri Lanka His Excellency James Dauris and other High Commission officials were present at the meeting.