If ‘Black January’ were not to repeat, Editorial, Ceylon Today 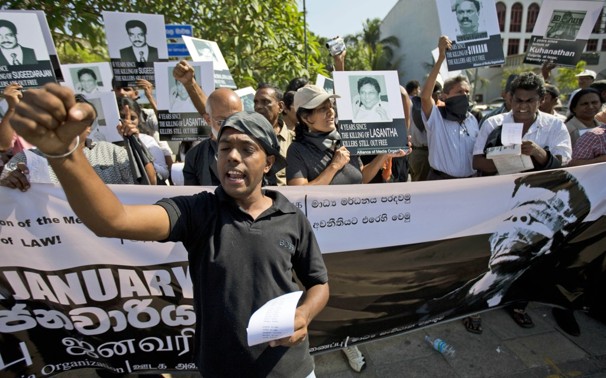 Media practitioners will stage a protest at Lipton Circus today, to mark what has become an increasingly uncomfortable month for journalists in Sri Lanka. Black January, as the month has established itself since the brutal murder of Sunday Leader Editor, Lasantha Wickrematunga on 8 January 2009, has had a number of black days in the ensuing years, delivering body blows to media freedom and fearing free expression in the process. Disturbingly, the perpetrators of all these incidents, including Lasantha’s murderers, still remain at large.

Assault on media personnel is nothing new. And in fairness, it must be admitted that the present regime was not the first to do so, nor will it be the last. Yet, a fundamental human right is continuing to be violated by the regime and the concept of ‘Freedom of the Press’ is fast becoming a very unpopular idea, especially among those who pretend to be the ‘gatekeepers’ of the government.

A free media is an integral component of democracy. But, instead of strengthening this vital component, the government has routinely threatened, intimidated, harassed the media, bringing to near submission today, with several journalists forced to flee the country and others afraid to write the truth.

The brutal assaults on journalists such as Keith Noyahr, Upali Tennekoon and Poddala Jayantha are only the tip of the iceberg. What is taking place in the North in this regard, intimidation and harassment of media personnel, is not even reported sometimes. The unholy practice of ‘killing the messenger when one doesn’t like the message’ is very much in evidence, and in some cases, in the most literal sense.

A modern version of ‘attacking the messenger’ can be seen when many blame the media for presenting bad news about a favoured cause, person or organization. The bitter truth remains that ‘shooting the messenger’ might be an age-old emotional response and a knee-jerk reaction to unwelcome and undesirable news, but it is not a very effective technique to be employed by those in power nor is it a proper way to remain well-informed in the fast-changing, modern world.

The fleeing of those ‘once-unafraid’ writers from the shores of Sri Lanka is continuing to date. But, Black January seems to have had no telling effect on those who made it black.

In such a morbid context, it is the public that is robbed of their right to information, and to be informed. For, what often filters down from a perch of fear and concern, are carefully edited versions of the truth, complete omissions and, if one is to take the State media, exaggerations and half truths. It is indeed tragic that the public often accept what is dished out in the State media as the gospel truth and in their ignorance, end up condoning undemocratic acts, both against the media and the public.

The greatest friend a tyrant could have is an uninformed public. The most formidable crusader against such a despotic practice and for keeping the public informed is the honest and fearless journalist. This is why the power of the pen can never be underestimated. This is also why every tyrant wants to keep the media under his thumb, with gifts and bribes, or attacks and intimidation.

At a time when the lines of separation of powers among the Executive, the Legislature and the Judiciary are fading, at a time when a Chief Justice was subjected to the most humiliating treatment by some members of the Legislature, at a time when those who humiliate and ridicule the system of the rule of law in the country are at the receiving end of promotions and more lucrative government favours, and at a time when the practitioners of journalism are harassed, intimidated and forced to leave the country, writing anything even meagrely critical of the ruling elite could be considered high-risk and death-inviting.

But, if we are to survive as a vibrant democracy amidst this unholy and suffocating atmosphere, one must be fearless, one must be courageous, and one must continue to write the truth as one sees it. That is our fundamental right.