IDPs’ rights must be respected 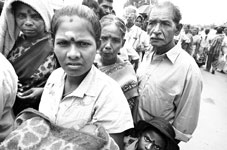 R. M. B Senanayake
The Bishop of Jaffna has issued a statement setting out the ground realities in the Northern Province. We can expect the bishop to be reasonable and objective rather than be swayed by emotion and emotional attachments to ethnicity. So we hope and pray that his statement will receive the attention of President Mahinda Rajapaksa.
The government says that the bulk of the internally displaced people who were in government camps like the Menik Farm have been re-settled because they are no longer in such camps. But the Bishop points out that a considerable number of them who left the camps are staying with their kith and kin and in transit camps.
But re-settlement of the Internally Displace people must, in terms of the UN Declarations mean the resettlement in their previous homes or at least in comparable surroundings. A long simmering dispute among the displaced Tamil and Muslim fishermen took a serious turn recently. This shows that whatever re-settlement that has been carried out by the government is inadequate. The problem of resettlement of IDPs is undoubtedly complex and cannot be swept away by merely quoting numbers comparing the present and past situation immediately after the war. While many such people are still without homes and unable to resettle in their previous villages and homes, there is criticism that the lands in the Northern Province are being taken over for the military. While conceding the right of the government to station troops anywhere in the country, yet they must behave in the same way as in the South and not interfere in the civilian administration. The appointment of a military man however good or just he is, is not conducive to promoting civilian rule. There must be a return to civilian rule as happened after the Civil War in USA. Government should study post civil war experiences in other countries. There is criticism that the military is promoting the settlement and deployment of outsiders, (never mind whether they are Sinhalese, Tamil or Muslim) in the lands and fisheries resources in the north, when internally displaced people are still without their homes and lands and local fishermen are deprived of their fishing rights. It would clearly be unjust not to give priority in meeting the needs for lands, homes and fisheries resources of the IDPs before bringing in outsiders.

The problem of resettlement of the IDPs is tied up with the problem of their rights to lands and homes they previously occupied. When they were displaced other people naturally occupied their lands and homes. But justice requires that the respective claims of those now in occupation and those original owners displaced by the war, should be settled according to some principles of law and ethics. This requires an Independent body to look into such rival claims. This problem now exists in Syria, Iraq, Libya and several African countries. The problem has been studied by the United Nations and it would be wise for us to learn from its experience. The government still does not allow non-governmental organizations to enter the province to provide assistance. The government should be urged to seek international assistance to handle the problem of resettlement according to UN standards. There are several UN Resolutions on how to deal with problems of those internally displaced during a war. Such displacements have occurred after every war since the Second World War. The Guiding Principles for humanitarian assistance and resettlement of refugees is that they must be in accordance with the principles of humanity, impartiality and neutrality. Humanitarian objectives exclude the pursuit of any other political, economic or military objectives. The best way to ensure such independence of humanitarian objectives is to allow the UN Agencies dealing with such issues to come in and for us to seek their technical and professional assistance in matters of resettlement and land rights. The UN has put in place international humanitarian law and refugee laws. The government whether it has ratified these UN Declarations or not, must take appropriate legal, administrative and judicial measures to implement the UN Declarations on humanitarian assistance for the resettlement of internally displaced in the North.

The intervention of the military in civilian life and the presence of armed vigilantes in the North has brought about a climate of fear among the people who face personal violence, abductions, assassinations, and death threats. Even the Catholic clergy have been victims of such violence as detailed by the Bishop in his statement.