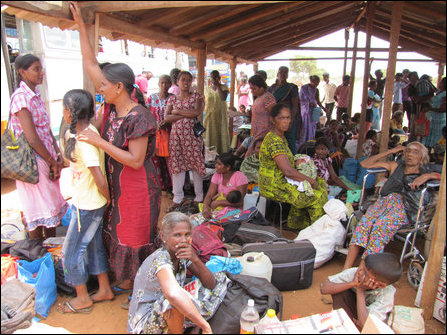 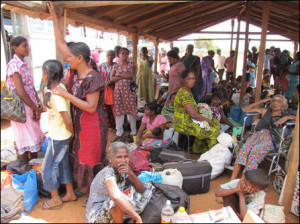 The SL military on Sunday dismantled the Cheddiku’lam IDP camp to forcefully remove the inmates, without making any permanent arrangement for their resettlement or return to their original villages. The seriously affected group is the villagers of Keappaa-pulavu of Mullaiththeevu district, whose village is now grabbed by the occupying military. The Sinhala military is quick to announce on Sunday, “There will be no more IDPs in the country from today.” On Friday, the camp inmates, having lost all confidence in Colombo government, have directly appealed for International intervention to enable them to return to their homes.
The IC that abetted the genocide and herded the survivors into barbed-wire camps, now engineering even resettlement in continued complicity with genocidal Colombo, has again gone on record, commented Tamil political activists.
Memorandum from Keappaapulavu families in Menik Farm

On Sunday evening, the occupying Sinhala military dismantled the fences and other structures at the Cheddiku’lam IDP camp.

125 families of Keappaa-pulavu village remaining in the camp slept under trees on Sunday night.

The families didn’t want to vacate without an assurance of returning to their own homes and lands. The SL military that now occupies their village wants them to move to a school building now and then accept alternative lands in other places for resettlement.

The SL military on Sunday left the people in the camp exposed to elements, with an unsaid message that ‘if you don’t want to move, stay in this jungle infested with elephants,’ the camp inmates said.

Knowing the ‘techniques of intimidation’ of the Sinhala military and the repeatedly proven complicity of the International Community of Establishments and its institutions like the UN in subjugating them to the genocidal state of Sri Lanka, the hopeless inmates of the camp were watching the heavy vehicles transporting their belongings on Sunday night.

They were told that they would be transported to Vattaappazhai by buses on Monday morning.

They have no idea where they would be eventually dumped for ‘resettlement’.

Last week, the villagers of Chooriyapuram in the IDP camp were taken for ‘resettlement’ and were dumped at a nearby jungle tract without any facilities, including water to drink.

Meanwhile, a commander of the occupying Sri Lanka Army, Maj. Gen. Boniface Perera, who is appointed by colonial Colombo as the ‘competent authority’ for IDPs in the northern region told Colombo-based Daily Mirror on Sunday that there is ‘no more displaced people in Sri Lanka from today’.

“A total of 1,186 people from 361 families –the last of a group of more than 300,000 displaced during the war in the north — will leave the Vavuniya Manik Farm [Cheddiku’lam camp] to their original places of residence in the Mullaitivu district today,” the SL commander has told.

Eezham Tamils were gagged from exposing the farce of resettlement that was on one hand engineering economic subservience of them for generations to come and was on the other hand facilitating militarisation, Sinhala colonisation, demographic changes and on the whole, a structural genocide.

Salute to the people of Keappaa-pulavu, who amidst all intimidation, braved to expose the farce and put it on record that the ‘resettlement’ is another vicious military operation of Sri Lanka carried out on the subjugated nation of Eezham Tamils, with the abetment of the International Community of Establishments and the UN, commented, alternative political activists in the island.
TN