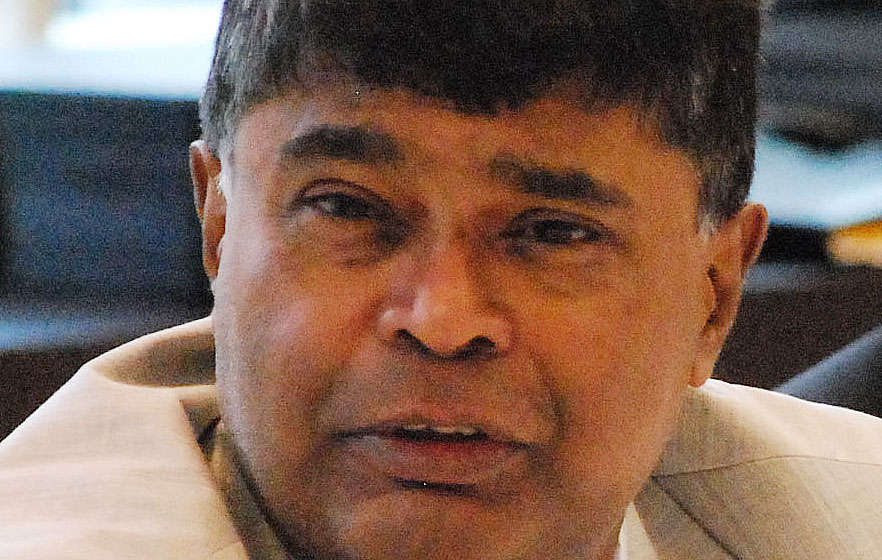 Prof.Rajiva Wijesinha M.P.
In the current context, Mr Speaker, it is an urgent necessity to register the importance of budgetary provision for our Ministry of External Affairs, and I am honoured to have been asked to speak on this subject.
I should add that I am surprised that the opposition has not taken the opportunity of proposing an amendment to increase the amount we should be spending. The General Secretary of the main opposition party noted recently that the failure of the government to rebut formally many allegations made against this country, as well as against the UN officials who helped the Sri Lankan people while we were struggling against terrorism.

While his criticism was misplaced, he certainly had a point in that we should be doing better in presenting internationally the actual situation in this country. But instead of engaging in blind condemnation he should help, as some members of his party have done, in subscribing to the excellent memorandum prepared by young Members of Parliament of all parties, to develop a more constructive policy.

The key to such a policy, Mr Speaker, is training, as the President made clear in many parts of his budget presentation. Though specific mention was not made of the need for better training within the Ministry of External Affairs, we must realize the importance of developing coherent policies and youngsters able not only to implement them, but also to explain them.

As it is, we seem to be torn between conflicting predilections, as was graphically illustrated when the most successful diplomat of recent years, Dr Dayan Jayatilleka, was attacked in the media after the debacle in Geneva in March this year. The claim then was that the conservative elements in the Ministry of External Affairs were now able to reassert themselves, and carry out the policies of President J R Jayewardene, as against the traditional policies of the party of the current popularly elected President of the country.

What is that traditional policy, and how do we make it clear, not only to the world, but also to officials of the Ministry who are still stuck in the mindset of 1987, that this is what must be promoted? At a recent seminar on Indo-Sri Lankan relations, for which the Adviser to the President on the subject had nominated me, we were reminded by a distinguished Indian scholar of how some Sri Lankans were still obsessed by resentments against India born of the events of 1987, just as there had been Indian bureaucrats obsessed by resentments against China because of the events of 1982.

Thus, after the debacle in Geneva, we had attacks on India, with those elements in the Ministry of External Affairs who still hanker after the antics of the eighties trying to prejudice the country against India.

On the contrary, Mr Speaker, we must go back to the days of successful Sri Lankan foreign policy, when we had close relations with India, whilst also maintaining positive links with all other Asian nations. This does not of course mean that we should quarrel with the West, but fortunately the West is now more enlightened than it was in the eighties, when it had a polarizing view of the world in which India was in the opposite camp. Now, on the contrary, we can revert to the old policies of friendship with all, without worrying about adverse Western reactions to such inclusivity. And we can be confident that Asian countries, which always had broader perspectives, will feel no resentment provided we make it clear that we are happy to work together with all of them.

But, at the same time, we must understand that the West is constrained at present by pressures which we must help them to resist. Whilst we should not compromise at all with regard to false allegations, we can certainly do better in affirming our commitment to pluralism and human rights. This was what the Neanderthal elements in the Ministry of External Affairs did not understand when they attacked Dr Jayatilleka, and had Ambassador Kunanayagam transferred from Geneva.

While there may have been old style Cold Warriors in the West who resented the commitment of these two bright diplomats to Non-Alignment, more enlightened elements, amongst our Non-Aligned friends as well as in the West, appreciated their deep commitment to equity and democracy and Human Rights within Sri Lanka.

In that respect, Mr Speaker, we have to recognize that External Relations also involves input into domestic matters. Thus the very successful efforts of the Minister for Human Rights, when in accordance with the strategies laid down by Dr Jayatilleka in Geneva he defended Sri Lanka against false allegations, also depended on coordination with UN mechanisms.

The visits we arranged at the time for Special Rapporteurs on subjects such as Torture and the Displaced contributed to better understanding, and it is a great pity that we stopped engaging with such helpful individuals after the Ministry of Human Rights was abolished.

At the time I thought the Ministry of External Affairs could handle the subject, but the Secretary to that Ministry soon made it clear that this was not possible. Given that we have since failed to make our position clear, whilst also ensuring not only that we improve matters, but also that we convey this message to the world, I believe it is important that we once again have a dedicated mechanism to ensure better Rights for our people.

Despite the excellent cooperation I have received from so many officials, I am increasingly finding my task of convening the Task Force on expediting implementation of the National Human Rights Action Plan difficult, because coordinated action is nigh impossible with so many Ministries responsible for similar matters.

The recent tragedy at Welikada is ample evidence, given the insightful recommendations of the President in the – DBSbudget speech last year, that action must be expedited, and not left to individual agencies that feel no sense of urgency. I believe therefore that the special envoy of the President with regard to Human Rights should also have executive responsibilities in this regard, so that we can ensure implementation of commitments we make.

But for this purpose we must also develop a more coherent approach to Rights, and to their role in international relations. I have long advocated the establishment of training programmes in this regard, and development of institutional mechanisms for this purpose. Whereas the Ministry of Defence for instance is producing better officers with wider perspectives, the Ministry of External Relations, which should take the lead in such matters, lags behind. Perhaps this is because it needs more resources, so that institutions such as the Lakshman Kadirgamar Institute and the Bandaranaike Centre for International Studies can develop into think tanks on a par with those we find in India and China.

With Dr Jayatilleka about to return, after two years in Paris which saw a much more enlightened approach to Sri Lanka than we suffered from earlier, it would make sense to use his services to develop diplomats who can serve their country more effectively.

I have no doubt that the brilliant intellectual leadership the Ministry of External Affairs now enjoys will understand this point, and make much better use of Dr Jayatilleka.

I hope too that the Minister will ensure that the efforts of the President to make better use of internationally admired figures like Ms Kunanayagam will not run into the blocks that have been thrown up, that nearly prevented her delivering in Geneva and New York the report of the Working Group on the Right to Development.

While Dr Jayatilleka served in Geneva Sri Lankan achievements were seen as a model and, in the short time she was in Geneva, Ms Kunanayagam was able to restore something of that reputation. We must aim to have more people like that, who can restore the reputation of our diplomats, as established by brilliant thinkers like Shirley Amerasinge and Neville Kanakaratne.

Those of us who saw them in action may seem old fashioned in hankering after such genius, given that our education system has declined since the days in which it could produce such brilliant communicators easily. But we must strive for at least something of those days, and I hope the Ministry will make use of its brightest stars of recent years to give new ideals at which a younger generation should aim.

(I had been asked to speak on the votes of the Ministry of External Affairs during the Committee Stage of the Budget Debate, but was subsequently told that there was no time for this. Since I had prepared a text, which I felt discussed urgent issues in the current context, I thought it would be useful to make this available instead of forgetting about the points raised.)
– courtesy DBS