Hydroxychloroquin: Balancing hope and science in the search for a coronavirus cure 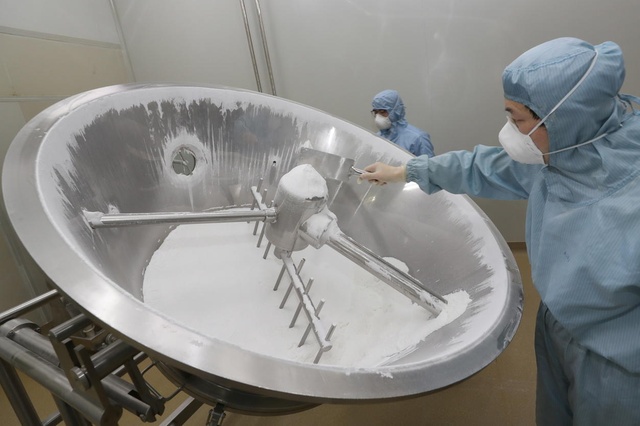 The controversy surrounding the antimalarial drug hydroxychloroquine epitomises the challenges faced by corporates in balancing politicians’ desires to offer hope on the one hand and scientific realities on the other.

Novartis Chief Executive Vas Narasimhan recently told the SonntagsZeitung newspaper that, of its portfolio, the antimalarial drug hydroxychloroquine offered the best hope in the fight against Covid-19.

As Novartis’ Sandoz division is one of the largest makers of the drug, the statement naturally created some buzz amid a mad search for a treatment for the virus that has infected more than one million people worldwide.

Big pharma has been treading a fine line between giving hope and ensuring safety, recognising that in normal times, much more rigorous scientific testing would be required before companies would put anything on the market.

But these are anything but normal times. As patients run out of options, some doctors are turning to hydroxychloroquine and a similar drug, chloroquine, and reporting some positive results. This has led to enthusiastic remarks by US President Donald Trump that have left some epidemiologists uneasy.

The US Food and Drug Administration (FDA) granted the drug emergency use authorisationexternal link for Covid-19 patients, but European authorities have been much more reticentexternal link to encourage use of the drug.

The Swiss Society for Infectious Diseases has included hydroxychloroquine as one of the antiviral treatmentsexternal link for consideration in hospitalised Covid-19 patients.

This paved the way for Novartis to make Switzerland the second countryexternal link, after the US, to receive part of the 130 million doses its subsidiary Sandoz has committed to donate as part of its coronavirus response. Another Switzerland-based company, Mepha, the generics arm of Teva pharmaceuticals, also announced on Friday a donation of 90,000 dosesexternal link to Swiss hospitals for “seriously ill and hospitalised patients”.

Proof in the pudding

Hydroxychloroquine (along with chloroquine) is one of four drugs that are being studied in World Health Organization Solidarity clinical trials. One key advantage of the drug is that it’s cheap, readily available and familiar. Hydroxychloroquineexternal link was approved for use by the US FDA in 1955 and has been used to treat malaria and autoimmune diseases like lupus and rheumatoid arthritis.

The trouble is that the evidence of its benefits against Covid-19 is still patchy.

A Novartis spokesperson told swissinfo.ch that “although there is no approved treatment for Covid-19 today, hydroxychloroquine has shown promise in early studies in vitro”, citing a studyexternal link out of China from early February. But success in a petri dish doesn’t necessarily spell success in humans, as researchers learned when they tested chloroquine during the 2002-03 SARS outbreakexternal link and against other viruses such as dengueexternal link.

Much of the excitement and hope in the drug this time around has come from limited studiesexternal link and anecdotal evidenceexternal link from doctors and patients.

Small clinical studiesexternal link, some with randomised control groupexternal links, are emerging, particularly in France and China, with mixed results in how quickly patients recovered and how the disease progressed.

David Reddy, CEO of Medicines for Malaria Venture, a Geneva-based research foundation that has developed over 10 antimalarial drugs to date, says there is still a lot we don’t know. “We still have more questions than answers about the drug’s effectiveness against the virus today,” Reddy, the former leader of Swiss pharmaceutical company Roche’s Influenza Pandemic Taskforce, told swissinfo.ch.

“The moves people are making are pragmatic. We need to learn as we go because we don’t have a full picture yet.”

Some Swiss hospitalsexternal link in the University Hospital in Geneva have started using hydroxychloroquine for certain patientsexternal link.

Chloroquine holds well-known risks, particularly for anyone with a heart condition. What Reddy worries about most is this turning into the “wild West” with the medicine being used off-label without scientific evidence of its safety and efficacy against Covid-19. It’s important to understand the dose at which the drug could be effective, safe and lower the chance of drug resistance, he says.

Chloroquine resistanceexternal link has diminished its use to treat some types of malaria such as P. falciparum. However, the drug remains critical for the treatment of P. vivax, relapsing malaria, and for malaria prevention.

There are other knock-on effects that concern Reddy. There have been reports of people self-medicating and then overdosingexternal link. Fake packagesexternal link of the drug have also started popping up in places.

There are already reportsexternal link of more requests from hospitals and hoarding by doctors, creating shortages for patients who take the medicine on a regular basis. Both the lupus and rheumatoid arthritis leagues in Switzerland have reported bottlenecksexternal link in the supply of Plaquenil, the brand name version of the drug. They say they are working with cantonal medical services to ensure adequate supply.

Reddy cautions that even if the drug shows promise it is still a prescription medicine that must be used under medical supervision. Self-medicating with chloroquine may do more harm than good. In addition, he says there are patients who take these drugs every day for chronic autoimmune conditions like lupus or rheumatoid arthritis.

“To take this vital drug away from people who need it, that’s inappropriate.”

The drug also poses more practical challenges for companies like Novartis, one of which is manufacturing capacity.

As with many older drugs, such as antibiotics, manufacturing has moved to cheaper locations such as India, which recently announced restrictionsexternal link on the export of hydroxychloroquine.

Active Pharmaceutical Ingredient (API) production is highly concentrated in Asia among a very small group of suppliers, particularly for chloroquine. Any disruptions in production could create problems in sourcing for finished drug production.

Novartis told swissinfo.ch last week that its hydroxychloroquine manufacturing takes place in the US and is now working 24/7 to increase capacity. “We are also exploring further scaling of capacity to increase supply should the medicine prove effective.

The company added that it had enough API, which it sources from a third party, to produce all the 130 million doses it plans to donate. While the company is honouring existing commercial orders in the US, it is not accepting new commercial orders. All remaining quantities are earmarked for donation.

Companies also take a risk ramping up production without clear evidence of the drug’s effectiveness.

Outside of the US, this medicine is available for donation only. As of Monday, Novartis had submitted approval applications to the authorities in around ten other European countries.The company recently scrapped a deal to sell offexternal link its US generics division, that would have included hydroxychloroquine, amid greater investment in innovative, potentially more profitable medicines.

But the real balancing act for companies is their communication. Governments are desperate to find a silver bullet, and any hint from pharmaceutical companies that they may be on to something can easily get swooped up. Companies know they have an important role and responsibility in this pandemic, Reddy says.

“The biggest enemy right now is the hype.”