Human Rights Day: CMB, Mannar, Kilinochchi calls for justice for all including judiciary 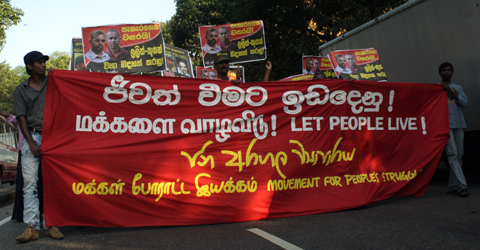 In Mannar they asked ” where is my daddy?” In Killinochchi they Demand justice for the disappeared; In Colombo Protests called for  freedom of the judiciary  and IFHR released Human Rights Report 2012


Mannar: Where is my Father?

A massive protest was held in Mannar yesterday appealing the release of relations who have gone missing, arrested and detained for many years and abducted on the blanket of unidentified persons.

Those attended the protest were chanting slogans and carrying placards, and some of the wordings were much emotional.   “Where is my daddy”?, White van is government, abduction by government”, “persons missing by government” “abductions done by government”. “Don’t snatch Tamil people’s basic rights”, “Don’t plunder”.

It is still unaware that those who have gone missing, where they are located, or whether they are live or not is still a mystery was the many questions amidst the protestors.

“None has the rights to hide those illegal arrested persons which the law says. Hence they should be handed over or should be produced before law, is the democratic obligation of the authorities of the arrested sector. However they were not still released or were produced in front of the law”.

“Release them and hand over to their relations. If they have committed any crimes, they should be produced in front of the law” were the appeals made by those involved in the protest.

This rally commenced in front of the Mannar St.Sebastian Church and reached at Kachcheri and a petition was handed over to President through Government Agent, with this the protest came to an end.

Before the commencement of the rally the relations of the missing persons got together and formed a movement named “finding families their missing relations” and the events were organized by the selected members of the working committee.

The missing person’s family members and many affected by war catastrophes, attended with emotions, in hundreds at the events.
OU

Killinochchi: Demand justice for the disappeared

To mark International Human Rights Human Rights Day yesterday (10) , demonstrations were held in Killinochchi as they were in Colombo  The demonstrations centred on demands  to free the university students in Jaffna and strengthen the human rights  of the Tamil population.

The protesters demanded  from the government that students who were being arbitrarily arrested by the TID and kept in detention  be released forthwith.

They  also demanded that the human rights of the Tamil population be strengthened,.

The Leader of the Tamil National Peoples front, Mr. Gajendra Kumar told the media that  newly rehabilitated former LTTE members  were continuously happening, disappearances  taking place and demanded  from the govt. that justice be meted out to those who ‘ disappeared’ in the recent period.

Mr. Suresh Premachandra, MP of the Tamil National Alliance and Leader of the Eelam  Peoples Revolutionary Liberation Front and former MP of the Tamil alliance, Mr. Sivalingam also joined in the protest.
SLM

‘ The  Human Rights situation in Sri Lanka has suffered a major setback in the first 10 months with the rule of law, individual liberty and the independence of the Judiciary having received an unprecedented beating’, according to Intellectuals for Human Rights (IFHR) in its report for this year. The report has reviewed the violation of human rights in Sri Lanka during the period December 11, 2011 to December 10, this year and  briefly examines human rights violations in various domains highlighting prominent cases and examples to support the analysis and key arguments with reliable facts and figures.

According to the report issued yesterday( 10), to coincide with United Nations Human Rights Day, 148 females were murdered and 408 raped during the period under review, but only 10 cases had been filed in courts. The rise of the extrajudicial killings and inhuman torture clearly indicates the lack of respect of society for legal procedures and the rights of the citizens. It symbolizes the lawlessness in the country and indirect state approval for these illegal executions.

This year’s report consists of thematic reviews of abductions and killings, Independence of the Judiciary, Media Freedom, Grievances of Resettled and Internally displaced people (IDPS) and the Violation Of the Right to Education where significant adverse developments could be observed during the period under review..
http://www.mirror.lk/news/3735-movement-for-people-s-struggle-demonstrate
SLM

Colombo:Protests for freedom of the judiciary

There were protest at Lipton’s Circus yesterday(10) for bringing an Impeachment motion against the Chief Justice, Dr. Shirani Bandaranayake to make her the wrongdoer. Trade unions, civil society organizations, Lawyers associations, political party representatives  participated on this occasion.

The leader of the UNP Mr. Ranil Wickramasinghe along with  other MPs representaing the opposition participated.

The Parliamentary Select Committee (PSC) which went beyond the constitution to examine the Impeachment Motion against the Chief justice  was not acceptable, said the Deputy Leader of the UNP,Mr. Sajith Premadasa.

The Judiciary is being subjugated to pave the way for the militarization of state power, said Father Sathiyavel  of he National Christian Conference.

Dr. Wickramabahu Karunaratne , Leader of the NSSP stated that there is no basis for the govt’s statements that an appeal to the international community to intervene in the Impeachment process of the C.J. is a threat to the country’s sovereignty
SLM

A year ago this week activists Lalith and Kuhan of the Peoples Struggle Movement were arrested in Jaffna, even though there were many eye witnesses who can testify to this and also the added reason that their motorcycles were recovered in that area, the government refuses to admit that they had arrested these two activists, this statement is further thrown in to mockery as the government cabinet spokesman Kehiliya Rambukella, at first stated that the activists in question were not missing but that they were in police custody, this statement was later changed. This case has reached international recognition with the UN and Amnesty International stepping forward asking for the Immediate Release of the two members.

A huge march and rally was held today in Colombo, starting from the Technical Junction and finishing at the Colombo Kottuwa station, the protest was attended by several thousand people, at this event the Peoples Struggle Movement not only outlined the missing two activists but exposed other kidnappings and murders carried out by Goverment forces, there was a feeling that the severity of the protest was felt by the Government and its President.
LeN