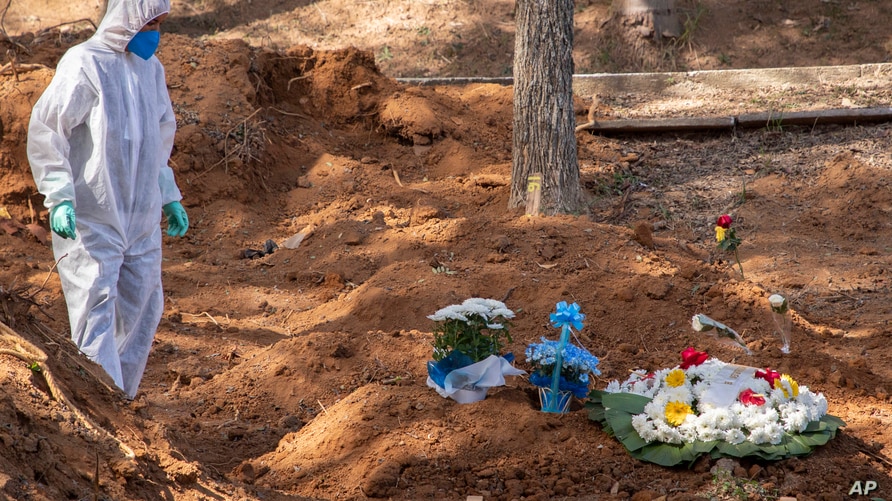 Image courtesy of Voice of America.

Issuing observations and recommendations on the disposal of dead bodies in
the context of COVID-19 Human Rights Commission of Sri Lanka has called on the government to take these recommendations  into consideration and that the
Gazette be amended accordingly.

The Human Rights Commission of Sri Lanka received complaints and expressions of concern from persons of various religious groups including Muslims, Christians and Buddhists on their inability to perform final religious rites after the death of persons in the context of Covid-19. Amongst the concerns raised, are the forcible removal of bodies, lack of a standard process for determining whether the deceased person has, in fact, succumbed to the virus, lack of transparency surrounding the process and doubt as to the mandatory cremation requirement. Further, the Commission has received numerous appeals to the same effect from family members of people who have been declared as having died of the Covid-19 virus.

While the Commission fully recognizes the need to impose restrictions on certain fundamental rights to protect public health at this time, the Commission is mandated to examine whether such restrictions are compatible with the relevant Constitutional provisions and international human rights obligations.

It is incumbent on the Commission as per Section 10 (c) and (d) of the Human Rights Commission of Sri Lanka Act No. 21 of 1995 to advise the government on the promotion and protection of fundamental rights and to make recommendations regarding measures which should be taken to ensure that national laws and administrative practices are in accordance with international human rights norms and standards.

Accordingly, the Commission presents the following observations and recommendations;

i. As at 9th November 2O2O,35 cremations have been carried out as related to Covid-19 out of which 17 were of the dead bodies of Muslim persons. ln some instances, we were informed that these dead bodies (janazas) were forcibly removed from homes to the National Hospital, Colombo prior to cremation. ‘

ii. While the Ministry of Health Provisional Clinical Practice Guidelines on Covid-19 Suspected and Confirmed Patients dated 27th March 2020 allowed for burial and cremation, these guidelines have been later amended mandating cremation. Reasons for effecting this
amendment however are not given.

iii. Part 8 of the ‘Provisional Clinical Practice Guidelines on Covid-19 suspected and confirmed patients’ Version 5 of 03.07.2020 issued by the Ministry of Health refer to the ‘Autopsy Practice and Disposal of Dead Body’. The guidelines provide that in the case of death due to suspected or possible corona viral infection, where the dead body tests negative, routine disposal of the body to be allowed on a case by case basis. The JMO must issue the report as early as possible and cremation mandated only if the report is not available within 24 hours.

iv. However, contrary to these guidelines, PCR tests are sometimes not cond,pcted on the
bodies at all and, in many instances, PCR results are provided only 48-72 hours after the
death. The Commission notes in this regard that it is alleged that 2 Muslim persons
cremated have now been taken off the Covid-19 casualty list and in one cremated person,
the PCR test has returned negative. Further, some of the persons that died at their homes
could not have contracted the virus since they have been homebound due to disability and
their family members have also stayed indoors in the weeks preceding the death. Some of
the persons that were cremated as having succumbed to the covid-19 virus could not in fact have contracted the virus since their family members have not contracted the virus within 14 days and medical attendants have not even been tested for the virus.

v. Health officials who treat supposed corona patients are not quarantined in accordance with the requirements of the applicable procedures. For instance, a 70 yr old who was admitted to Nawaloka Hospital was taken to IDH on the basis that he had tested positive.

vi. However, the staff who attended to him were not quarantined at all.

vii.  The family of the deceased has been asked to contribute various sums from five to twenty five Thousand Rupees for coffins. For some families, this sum was prohibitive since they are currently living in lockdown with no capacity to earn.

viii. The lack of transparency in the process of how a person is identified, having died of the virus is leading to many conspiracy theories and rumours. We have heard many such as
people who are found to have died of the virus but declared as having died of pneumonia so as to avoid having their mortal remains being disposed of in the prescribed format.  The World Health Organization (WHO) interim Guidelines on ‘infection Prevention and Control.

xi. WHO Interim Guidelines on ‘Water, sanitation, hygiene, and waste management for the
COVID-19 virus’ provides that conventional centralized water treatment methods and
household water treatment technologies can inactivate the covid-19 virus.The guidelines
mention that no extra measures are necessary and that risk to water supplies is low. s

x.It is not clear whether those who are handling the cremation of dead bodies are in fact
nominated by the ‘proper authority6 for that purpose as required by the Gazette.
For instance, we have reviewed a notification from the Registrar General’s Department dated 13 November 2020 prohibiting registration of death at home until the authorities confirm such death is not due to the virus and requiring the Registrars to report these deaths to the MOH and the police. This also refers to a notice issued by the Acting lnspector General of Police dated 5 November 2020. We have not seen any evidence of the proper authority nominating either the Acting lnspector General of Police or the Registrar General to issue instructions of this nature.

xi. The Gazette does not provide for a procedure to be followed to determine whether the
deceased has in fact succumbed to COVID-19 prior to mandating cremation of the dead
body. The Gazette is also silent as to the interactions the family members may have with the deceased such as for viewing and paying final respects. This has led to the arbitrary
application of the restriction and confusion among the public

xii. ln light of the foregoing the Commission observes that mandating cremation of those who have died or suspected to have died from covid-1.9 is neither necessary nor proportionate to the achievement of protection of public health and therefore is not a permissible restriction of the freedom to manifest religion or beliefs.

xiii. Forced and rushed cremation of dead bodies prior to without procuring conclusive evidence on the cause of death and not allowing family members the opportunity to, perform final rites while adhering to accepted safety measures is a violation of the freedom to manifest religion or beliefs.

i. Performance of final religious rites such as those performed at burial ceremonies is a form of manifestation of religion or beliefs and cannot be restricted except according to
Constitutional and international human rights obligations.

ii. Article 14 (1Xe)of the Constitution of Sri Lanka guarantees the freedom to manifest one’s religion or belief in worship, observance, practice and teaching to all citizens. Article 15 (7) provides that this rights shall be subject to restrictions as may be provided by law  for, inter alia, the protection of public health.

iii. international Human Rights obligations undertaken by Sri Lanka under the lnternational
Covenant on Civil and Political Rights (ICCPR) similarly provide that freedom to manifest
religion can be restricted to protect public health.

iv. However, the restrictions ought to be interpreted in favor of the rights at issue and in
harmony with all other rights recognized under the ICCPR. This is in addition to the
requirement that the restriction be imposed by law, necessary and no more restrictive than
is required for the achievement of the purpose of the limitation. Although a State may
invoke public health as a ground to restrict certain rights in order to take measures to deal
with a serious threat to the health of the population or individual members of the
population, such measures must be specifically aimed at preventing disease or injury or
providing care for the sick and injured. Further, due regard should be given to the
lnternational Health Regulations of the World Health Organization.

v.Section 2 of the Quarantine and Prevention of Diseases Ordinance, No.3 of 1897 (as
amended) authorizes the Minister to make regulations for “the purposes of preventing the
introduction into Ceylon of any disease, and also preventing the spread of any disease in
and outside Ceylon”. By Extraordinary Gazette No.2170l8 dated 11th April 2020 (Gazette),
the Minister for Health has issued regulations under the said section making cremation of
the corpse of a person who has died or is suspected to have died, from Covid-19
compulsory. Such a corpse can only be handed over to a person nominated by the ‘proper
authority for handling necessary cremation duties. lf requested the ashes of the corpse will
be handed over to the next of kin of the deceased person. This handing over is discretionary.

Accordingly, based on our observations, it is our opinion that the mandatory requirement for cremation imposed under the G.azette is not a valid restriction of the freedom to manifest religion or belief.

It is our opinion that amending Gazette No.2170l8 dated 1lth April 2020 incorporating the following will ensure. It’s compatible with the Constitution and Sri Lanka’s international! obligations:

i. Permit burials as well as cremations of bodies of persons who succumb to the Covid-19 virus while adhering to required health guidelines.
ii. Mandate’PCR testing results to be issued within 24 hours of a person’s death. ,
iii. Create a sanitary system of storing bodies of those who die at home and stop taking them to the police morgue.
iv. Adopt a systematic approach to the management of deaths that is humane and transparent.
– A transparent process for delegation of authority by the proper authority.
– A process for declaring a person’s cause of death
– Permitting families to pay their final respects while adhering to required health
guidelines.
v. Ensure stakeholder participation when formulating procedures for the management of deaths in the context of Covid-19 by engaging the communities that may be affected.

The Commission draws your attention at this point to its letter dated 29.04.2020 addressed to Secretary, Ministry of Health. The Commission reiterates the human rights position taken thereunder. The Commission further appeals to you to keep in mind the human angle as well. We all know, death of a loved one under any circumstance is one of the most difficult experiences for a human being. To add more grief of not sharing the information on the person’s death or imposing a fixed way of managing the mortal remains contradicting the edicts of the person’s religious beliefs is indeed extremely sad.

The Commission highlights that any restrictions on a fundamental right, even at time of crisis such as has struck the country at present, must be imposed under strict justifications and with as much space as can be reasonably accommodated for the exercise of the right at issue.

Therefore, we recommend the gazette be amended in the manner outlined above to ensure
compatibility with Sri Lankan law and international obligations.

Read as a PDF: Observations-Recommendations-Disposal-Dead-Bodies-Covid19_compressed