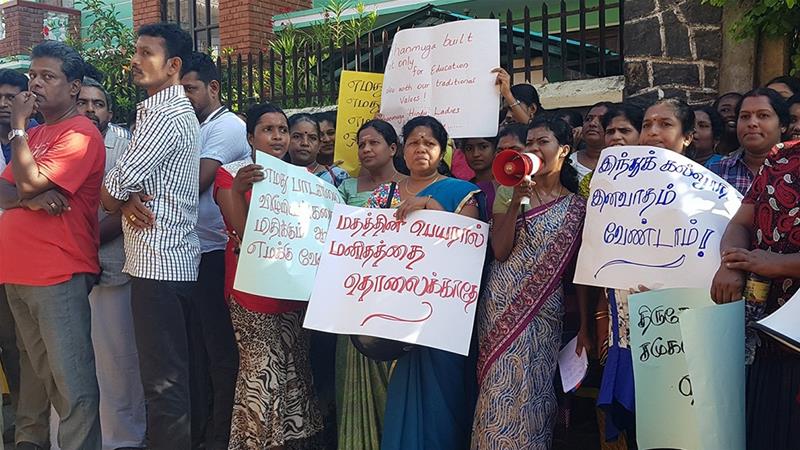 In March 2018, four Assistant teachers of Sri Shanmuga Hindu Ladies College, Trincomalee lodged a complaint with the Human Rights Commission of Sri Lanka (HRCSL) that the Principal and the School Board of Management prohibited them from wearing the Abaya at school. The school justified the prohibition on the basis that historically the school, which was founded by a Hindu, has followed Hindu traditions, and wearing the Abaya was not in line with the customs of the school.

HRCSL in its recommendation states that national schools are bound by the Constitution and cannot violate the absolute right to religious freedom under Article 10. The denial of the right of the complainants to wear their traditional dress as well as the arbitrary nature of the transfers to other schools were done on the basis the religion of the complainants. Hence, the rights to which the complainants are entitled as per Article 12 (1) and 12 (2) of the Constitution have been violated. The Commission further states that although the manifestation of religion, under Article 14 (1) (e), can be restricted in order to recognize and respect the rights and freedoms of others, ensuring another person’s religious freedom does not require barring the wearing of the Abaya at school.

The Commission also notes with deep concern that the use of social media, such as Facebook, to share information related to the case in the public domain without any regard for the confidentiality of the proceedings and without the permission of the parties concerned or the Commission is a breach of ethical responsibilities. In this case, such acts only served to incite religious and ethnic hatred and intolerance within the community and led to the harassment and intimidation of the complainants and respondents. Since such acts can even lead to inter community violence, the Commission calls upon all citizens to be mindful of the misuse of social media as weapons in campaigns to incite religious and ethnic hatred and violence and use social media responsibly as a tool to promote inter-ethnic and inter-religious understanding and harmony.