How the Sri Lankan Government is Crushing Dissent 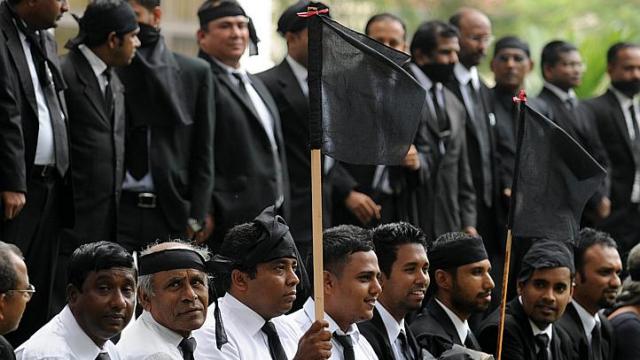 By Fred Carver–
To many external observers the Government of Sri Lanka appeared to lose the plot somewhat during the March UN Human Rights Council (HRC) session. A series of overt and heavy handed attempts to silence dissent, even as the session was discussing a resolution censuring Sri Lanka, appeared to illustrate precisely the point that Sri Lanka’s critics were making and guarantee the passing of a resolution calling for an international investigation in to war crimes committed in Sri Lanka.

Jeyakumari Balendran, a mother of a victim of disappearance, was arrested along with at least 60 and perhaps as many as 90 Tamil residents of the Kilinochchi area, the vast majority of them women. A Sinhalese human rights activist Ruki Fernando, and his associate Fr Praveen Mahesan were subsequently arrested after they investigated the circumstances surrounding the arrests. These detentions took place as part of a massive security clampdown, which saw thousands of soldiers taking part in search and interrogation operations across northern Sri Lanka. Many human rights violations were reported including a violent assault on 17 students at the University of Jaffna, their arrest and detention, and the abduction and torture of two further students. At the same time the Government of Sri Lanka issued a gazette designating 16 organisations and 424 individuals from the Tamil diaspora as terrorists, with severe consequences for anyone who interacts with them.

Following a major international campaign Fernando and Mahesan were released unharmed after two and a half days. Many of the others who were detained were released in the weeks to come.However, five months later, Jeyakumari Balendran and at least twenty other women are still held in Boosa detention centre, a place notorious for torture. Under the terms of Sri Lanka’s draconian Prevention of Terrorism act, Sri Lankans can be detained without evidence for up to 18 months.

All the Government of Sri Lanka’s actions were rationalised as being necessary as part of an attempt to clamp down on an alleged revival of the LTTE, the terrorist group that fought a 30 year civil war with the Sri Lankan Government that ended, with massive loss of life, in 2009. The Sri Lankan Government announced a massive manhunt for a man named Selvanayagam Kajeepan AKA Gobi who they accused of leading the revival, and who they claimed to have killed a month later on the 11th April. However the evidence to back up the Government of Sri Lanka’s version of events is nonexistent and many of their statements on the subject were contradictory. Such is the lack of evidence presented by the Sri Lankan Government that it is hard to say anything about Gobi with any certainty.

However what we can say is that there has been absolutely no evidence produced to link any of the accused with terrorist activity, and that it is self-evident to those with any familiarity with heavy militarised northern Sri Lanka that any attempt to revive the LTTE at this moment would be inevitably doomed to failure, and thus that the risk posed by Gobi was hugely overstated.

A similar tale is told by the proscription of the Tamil diaspora organisations and individuals. There are credible suspicions of terrorist activity against 4-6 of the groups listed and Interpol have stated an interest in 21 of the individuals. There is no evidence whatsoever against 8 of the groups listed or 403 of the individuals, two of the individuals are dead, 2-4 of the organisations no longer exist, sections of the list are clearly over 12 years old, and the vast majority of those implicated on the list represent moderate mainstream Tamil opinion that in many cases have been arguing for accountability and thus against terrorism.

It is our view that these actions were not simply strategic errors on the part of the government, nor evidence of their indifference or imperviousness to the impact they were having in Geneva. Instead, the Government of Sri Lanka’s actions should be considered as a deliberate part of a long-term strategic plan. These actions gained them considerable ground in their long term objectives of pacifying the Tamil majority areas of Sri Lanka by force, silencing internal dissent, and building a
lasting regime with the Rajapaksa family at its apex – in return for which, the loss of the HRC resolution was considered a price worth paying.

Our thesis is that the Government of Sri Lanka, or sections within the ruling family, conceded that the resolution could not be prevented but nevertheless felt that the success of the resolution was damaging their interests. They therefore set out to ensure that it could never happen again, and that the potential positive impacts of the resolution would be negated. They did this through a series of actions designed to:

– Intimidate Sri Lankan civil society into silence so that the passing and subsequent findings of the HRC resolution did not open up any public
space which could be used to question the actions of the regime. – Intimidate the population of the northern province of Sri Lanka more generally, so as to cut at source any dissent towards, or further information about, the levels of oppression that currently exist. It is our further view that the international community, media, and global civil society (the Sri Lanka Campaign included) made an understandable but fatal error in reducing the level of attention and advocacy on Sri Lanka in the aftermath of the resolution, which allowed the government’s strategy to win out. The result is that Sri Lanka’s future has never looked more perilous, and that only a series of robust, substantive, and targeted sanctions and further actions will bring Sri Lanka back onto a steadier course. We further feel that the international community, defined broadly, needs to rethink its attitude to Jeyakumari Balendran and push strongly for her release, and that of the others detained at the same time. Fairly or unfairly the perception among many has been that Jeyakumari Balendran didn’t receive the support and coverage that Ruki Fernando and Fr Praveen Mahesan did for reasons connected to race, class, language and clique.

This has had a seriously deleterious effect on Tamil human rights activism. We argue for a travel ban against those most culpable for these violations of human rights: the Police’s Terrorist Investigation Department (TID) and Criminal Investigation Department (CID). We argue for the repeal of the Prevention of Terrorism Act and all those detained under it. We argue for Colombo Embassies and High Commissions to take stock and seek to improve their protection strategies for Sri Lankan Human Rights Defenders. And finally we suggest to Sri Lankan Civil Society that the time is right to put serious thought into devising a strategy for how best to respond in a concerted manner to the increasingly sophisticated and concerted attempts to prevent their activity. Finally, we note disturbing similarities between the situation in Sri Lanka currently and that in spring of 2008 where the arrest and detention of JS Tissainayagam and other crackdowns caused a similar chilling effect on civil society. This started a process which culminated in the murder, with impunity, of at least 14 media workers over the subsequent 15 months and which also created a permissible political climate for the catastrophic loss of civilian life in early 2009. We should therefore be deeply concerned about where this current crackdown will end, what it may be paving the way for, and whether the international community will once again fail to act if and when the situation further escalates.
[Photo: Sri Lankan lawyers protest against the government’s move to impeach Chief Justice Shirani Bandaranayake outside the supreme court in Colombo on Jan 11, 2013. Sri Lanka’s parliament voted to impeach the country’s chief justice on Friday, disregarding rulings from the Supreme Court that the process was illegal and threatened judicial independence. — PHOTO: AFP ]
This is the : executive summary of a longer report: Read the Full report here