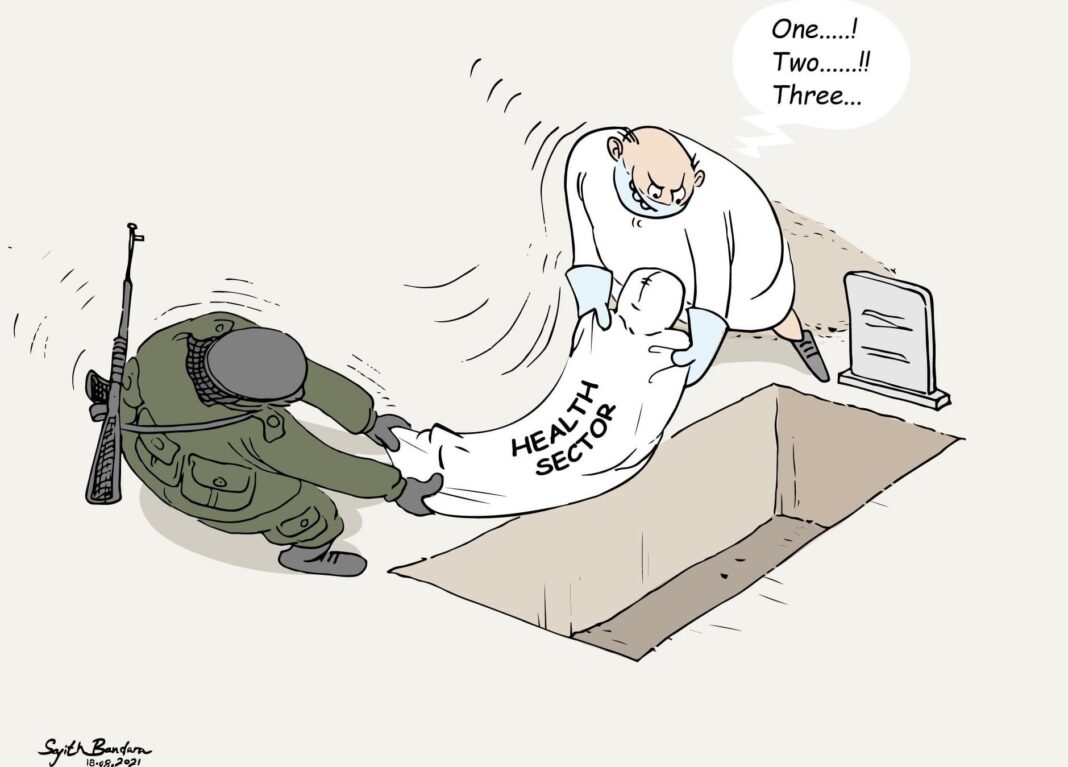 As much this millennium’s devastating global pandemic has brought deaths, destruction of livelihoods and mindless misery to millions across borders, there is a harsh mirror that it holds up to us. Political braggadocio and military might does not stop this virus; sensible public health leadership does. It is as simple as that.

These are all cumulative factors for the breakdown of governance in Sri Lanka for which a prescription of police force and military might will not work.

But Sri Lanka’s politicians are yet to learn that lesson, it seems. The result is catastrophically high human cost of not only the covid stricken and desperately vulnerable ‘hoi polloi’ crowding our hospitals and overflowing to open spaces but finally, the implacable reaching of virus tentacles into the high echelons of the Government, establishment, political and corporate elites  One by one, each is struck down by the pandemic. Meanwhile, the political and economic consequences of this colossal failure of Sri Lanka’s preferred military policy in dealing with the pandemic is inevitable.

This manifest ruin was both heedless and needless, let it be said.  In effect, Sri Lanka and Sri Lankans are paying the price for a fatal misdirection in replacing competent public health leadership by military leadership that was cheered on by many in naive ignorance of what this would lead to.  We had a measure of sensible governance early last year but that soon degenerated into comedy and then farce. A Health Minister dropped magic pots into the river, a shaman’s bewitched tonic was gulped down by ruling politicians in the hallowed chambers of the Speaker of Parliament disgracing even the memory of venerable occupants who had previously sat in the Speaker’s Chair.

Meanwhile, effective public health officials were booted out of their posts and true to form, a planned vaccination process prioritising the elderly was discarded in favour of a free for all with politicians handing out ‘tokens’ for their favourites to get the jab. Even now, the process of vaccinations outside the capital is far from ideal; the poor wait in maddening lines while the rich and the favoured are given special treatment.  Widespread fury is evidenced and in some places as was the case in Chilaw and Galle this week, infuriated citizens mob vaccination centres leading to obvious covid-19 spread.

We see the dreadful consequences of this colossal failure on the part of the State as Sri Lanka’s elderly population die in their hundreds per week. Doctors, nurses and hospital staff also join the ranks of the decimate, most often unsung,  mere names in a register. These are not the ‘famous names’ about whom paeans of praise are sung but each, a human being for whom copious tears are shed by their loved ones. So if this is a Government which loves to boast about it being ‘the first’, well, we may boast too that we are the first to demonstrate the obvious truth that the military cannot cure a pandemic and offer the deaths too, to prove it.

Granted, the military may be called upon to play a crucial role in health emergencies and in fact, the Sri Lankan military did play that role earlier on when it managed quarantine centres to a reasonable degree of efficacy notwithstanding a tamed media being employed to sing extravagant propaganda praises.

Even so, a Health Task Force must be led by health professionals with the military playing a supportive role. And there is a larger point here. Does it really need an Army Commander with his unform emblazoned with medals to solemnly inform us that a country wide ( ‘purported’) ‘lockdown’ will continue for another week?

Is this not a cheapening of the military role of and by itself? These are routine decisions which ought to be handled by the responsible civic authority. The Army Commander earlier ‘announced’ that the production of vaccination cards would be made ‘compulsory’ in ‘public places.’ There is a lack of legal gravitas to such an assertion which was discussed previously in these column spaces given that a statement of an Army Commander does not automatically become ‘law’ restricting constitutional liberties. In addition, sizeable proportions of the populace still remains to be vaccinated. Without the completion of that process, this will be a hard decision to implement.

In short, this back-and-forth of incoherent decision-making has been primarily responsible for the current chaos. How long does this tragedy of multiple acts have to play before a course correction is effected? There is no point in the Government calling upon the country’s medical leadership to suggest options if the high rate of deaths continue when it is manifestly clear that it has, all along, disregarded the recommendations of medical specialists. Notably, its tame poodle, the Government Medical Officers Association (GMOA) yaps now only intermittently as opposed to the crescendo of complaints that it had in 2015-2109.

Now it confines to grumbling about pet hates in the Epidemiology Unit and inaccurate statistical data regarding the numbers of deaths and those afflicted by covid. But the issue is far wider than one or two individuals, as inefficacious as these worthies may be. Appointing past military men as Secretaries of key Ministries, including to the Ministry of Health,  was a policy that the GMOA should have opposed far earlier.This too was part of the militarisation drive which has brought Sri Lanka to this state.  Deaths of doctors as a result of the pandemic are therefore on the heads of the leadership of the GMOA. It played ducks and drakes with politicians to the self –advancement of a few.

So as much as failures in leadership have led to a crisis of unprecedented magnitude with deaths that is far surpassing casualties of war, we have to look beyond the political spectrum in this regard. What is manifest is an overall failure of the State which the covid-19 pandemic has laid bare. This has ramifications beyond the halth sector. This week, a Magistrate observed to the police that a trade unionist could not be remanded for making factually correct statements on matters of public interest, pointing to the freedom of speech assured to citizens under Article 14 (1)(a) of the Constitution.

Course correction needed even at this late stage

This ruling came interestingly enough in the wake of the Judicial Service Commission (JSC) being called upon to explain itself in Parliament in regard to allegations that judical officers had been ‘instructed’ to rule in favour of motions by the police during a recent webinar. In the words of the Bar Association of Sri Lanka in a letter which is the most recent in what has become a habitual expressing of ‘deep concern’, ‘there was a perception among judicial officers that there was an effort to impress upon them to give orders.’

This was in the context of the police requesting courts to curb protests, using certain sections of the Criminal Procedure Code to control public gatherings. Reportedly, the JSC had denied that there was any such improper pressure being exerted on judicial officers. But the very fact that the JSC was put into this position says much for the degeneration of our institutions. These are all cumulative factors for the breakdown of governance in Sri Lanka for which a prescription of police force and military might will not work.

Both the Government and the people need to recognise this fact, even at this late stage.