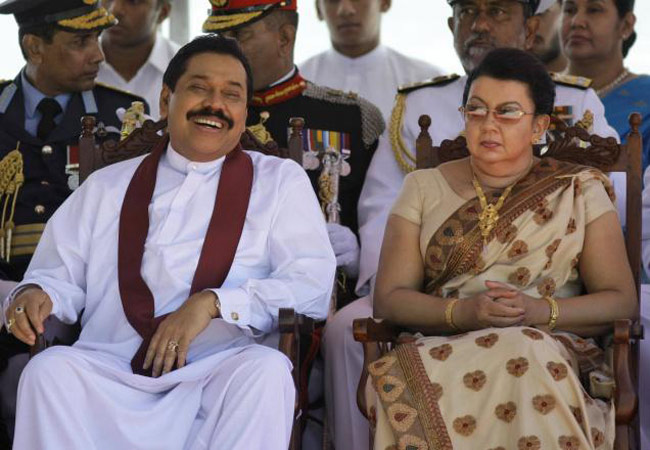 ‘Although the extravagant expenses made by the Rajapaksa family during their time was not a secret, it had now come to light how former First Lady Shiranthi Rajapaksa had spent a staggering amount of tax payers’ hard-earned money to stay in Paris for four nights just prior to her husband’s defeat at the 2015 presidential election.

Official documents this newspaper is now in possession shows how the former First Lady’s tour to Paris, to take part in the UNESCO Vesak Celebration in 2014, had resulted in public funds running into millions of rupees being used within five days. Mrs. Rajapaksa had accompanied her aunt – Daisy Forest alias Daisy Achchi – who shot to fame for receiving a gunny of gem stones from an unknown person, which was spent to purchase a property from Mt. Lavinia for her grand nephew, Yoshitha Rajapaksa, and a close associate.

The trio had checked in to one of the most luxurious hotels in Paris – Four Seasons Hotel George V and had wined and dined spending public money to the tune of a staggering Rs. 25 million. Although the accomplices had stayed in deluxe rooms, Shiranthi Rajapaksa had checked in to the Royal Suite, which is on the first floor of the hotel that has direct access to a private terrace overlooking the historic art deco fountain, the Three Grace. This suite features an oversize space for entertainment and relaxation with a marble fireplace and the master marble bathroom of redefined luxury with a steam room and a spacious walk-in dressing room fit for a king.

The Royal Suite charge alone had cost the country Rs. 10.556 million (Euro 58,000) for her five-day stay in Paris for the UNESCO event. A staggering amount of Rs. 25.08 million had been spent on Mrs. Rajapaksa and her two accomplices – Daisy Forest and Peththawadu Lakeesha Nisansala de Silva for accommodation, food and mini bar, limousines, VIP and miscellaneous expenses together with domestic air fare to Lourdes, where the famous Catholic shrine is. Although the said cost had been borne by the then Ministry of External Affairs headed by Prof. G. L. Peiris, it is believed that the airfare from Colombo to Paris had been settled by the Presidential Secretariat.

In an urgent fax to the Sri Lankan Ambassador in Paris by the Chief Accountant, Ministry of External Affairs dated May 19, 2014, states that Rs. 25 million had been allocated for the First Lady’s visit to Paris.

‘Accordingly, you are kindly requested to make payments not exceeding the allocations granted and send debit intimations to the Presidential Secretariat with a copy to this Ministry along with Monthly Summery of Accounts’.

[alert type=”success or warning or info or danger”]Once the former Foreign Minister had told that although King George V of England had stayed at Four Seasons Hotel George V, Queen Elizabeth II does not wish to stay there due to its high rates, but for the ‘Sri Lankan Queen’ the high rates were not an issue as it was borne by the tax payers’ and not by the Rajapaksas.[/alert]

A highly reliable official at the External Affairs Ministry during the previous regime, on conditions of anonymity, said that although the tour was planned only for the then First Lady, when the other two names were sent from the Presidential Secretariat to be included, the ministry had no say but to allocate more funds for the additional party as well. “An official from the Sri Lankan Embassy in France was assigned to look into matters related to Shiranthi Rajapaksa’s visit. But when the two names were included the External Affairs Ministry had to bear the additional cost as well. The tour to Lourdes was not official but a private visit. We had to pay the airfare for that as well,” sources said.
When asked who chose the hotel for the visiting party, the sources said that although when the President travels officially, to maintain the standard the best hotel is booked as he has to meet foreign dignitaries, he was not aware whether Four Seasons Hotel George V was chosen by the then First Lady or the External Affairs Ministry officials. “I assume that this luxurious hotel may have been selected by Shiranthi Rajapaksa as I know for certain that the ministry officials would not have chosen such an expensive hotel and one of its finest suits for Mrs. Rajapaksa. When instructions were given, our officials do not have a say but to abide by the instructions. This is a waste of money.

-Courtesy of The Sunday Leader.