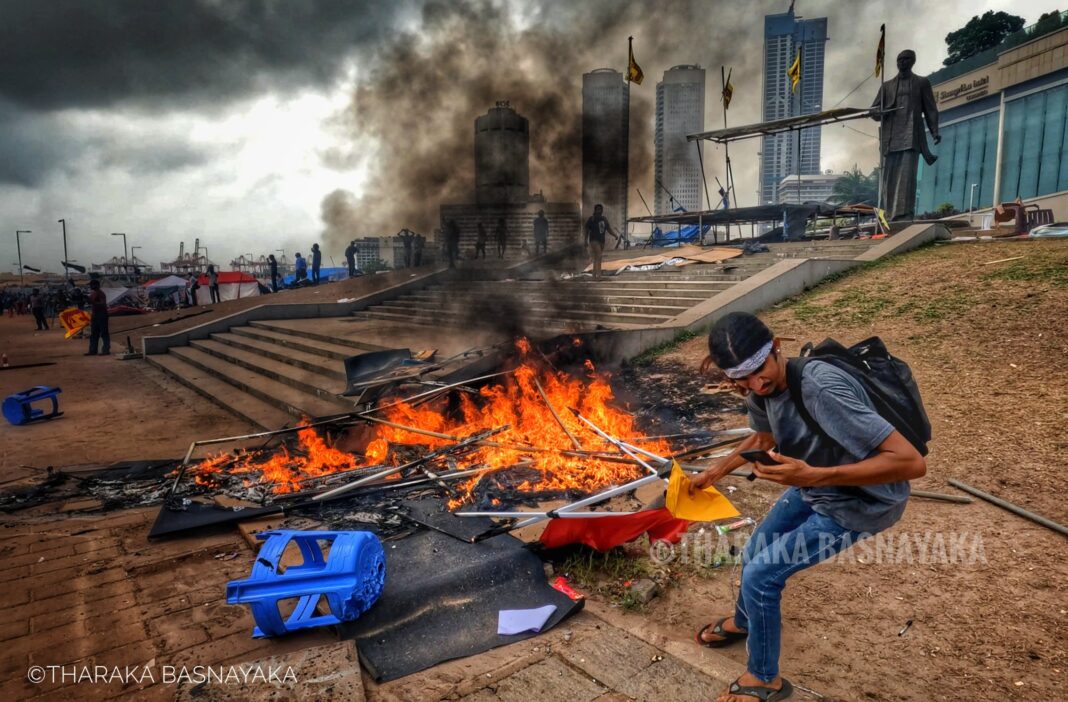 A ruling party & Galle district  member of parliament Ramesh Pathirana told parliament that  Western Province Senior Deputy Inspector General DIG Deshabandu Tennakoon, who had been directed by President Gotabaya Rajapaksa to prevent any unrest on the day, had to stand down the police personnel on duty after the directive from the IGP.

Pathirana who is among around 80 ruling party politicians whose houses and other properties were destroyed by mobs after the Galle Face incident said that he too had gone to Temple Trees on 9 May with party supporters from his direct who were there to bid Prime Minister Mahinda Rajapaksa farewell.

The Inspector General of Police (IGP) had prevented police personnel on duty near the Prime Minister’s official residence Temple Trees on 9 May from firing tear gas and water cannons to disperse the mob that attacked protestors at Galle Face Green, he  told Parliament yesterday.

He said that he sensed that a dangerous situation was developing towards the end of the meeting and had called up DIG Tennakoon and warned him that the situation is looking serious and had been assured by the senior police officer that there would be no problem and roadblocks had been put up to prevent the crowd from moving towards the Galle Face protest site.

But he avoided naming the stupid politicians. Video evidence shoes that  former Ministers Johnston Fernando and Namal Rajapaksa among the instigators.  Number of Pro-Mahinda Rajapaksa MPs accompanied the goons to Gota Go Gama to launch the attack.

Speaking further Pathirana told parliament that he was in a meeting with the President and immediately told him about the developing situation  asked him to intervene and stop it.”

The President had then called up DIG Tennakoon in front of Pathirana and several other ministers and told him “I told you to stop this kind of situation in the morning” and questioned what was happening.

In response, the DIG had replied that the IGP had called him at 12.40 p.m. and said not to fire tear gas or water cannons. The President had then said: “I am the President of this country. I am telling you to stop it immediately.”

Although the police used water cannons and teas gas after some time, Police targeted peaceful protestors much more than Mahinda Rajapaksa goons.

Two witnesses who testified before the Human Rights Commission had said the IGP and the Secretary to the Ministry of Law and Order who gave orders not to disperse the crowd, Pathirana told the parliament.

The Galle District MP said that there is a great deal of hatred among the public towards all 225 MPs and it was up to the House to conduct itself in a manner to win over the public.

“There are only 20-25 MPs who misbehave but they taint every other MPs image. I would like to request the Speaker to name these errant MPs every sitting week so that people know who they are,” he said.

On the other hand responding to MP Ramesh Pathirana, another ruling party MP told the parliament that it was same Ramesh Pathirana who influence IGP to appoint his cronies to run all police stations in Galle district.

With the inputs form Daily FT.