How far can India go on the Tamil question? – The Hindu 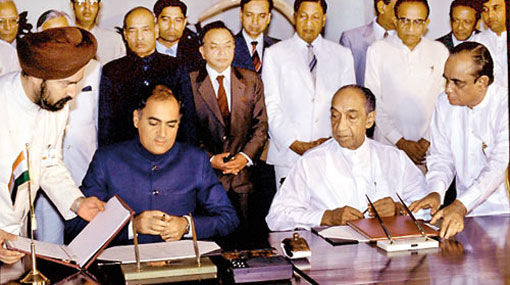 After the Rajapaksas’ win in the November 2019 presidential polls and the August 2020 general election, the spotlight has fallen on two key legislations in Sri Lanka’s Constitution. One, the 19th Amendment, that was passed in 2015 to curb powers of the Executive President, while strengthening Parliament and independent commissions.

The Rajapaksa government has already drafted and gazetted the 20th Amendment. The other legislation under sharp focus is the 13th Amendment passed in 1987, which mandates a measure of power devolution to the provincial councils established to govern the island’s nine provinces.

It is an outcome of the Indo-Lanka Accord of July 1987, signed by the then Prime Minister Rajiv Gandhi and President J.R. Jayawardene, in an attempt to resolve Sri Lanka’s ethnic conflict that had aggravated into a full-fledged civil war, between the armed forces and the Liberation Tigers of Tamil Eelam, which led the struggle for Tamils’ self-determination and sought a separate state.

The 13th Amendment, which led to the creation of Provincial Councils, assured a power sharing arrangement to enable all nine provinces in the country, including Sinhala majority areas, to self-govern.

In particular, the provisions relating to police and land have never been implemented. Initially, the north and eastern provinces were merged and had a North-Eastern Provincial Council, but the two were de-merged in 2007 following a Supreme Court verdict.

The 13th Amendment carries considerable baggage from the country’s civil war years. It was opposed vociferously by both Sinhala nationalist parties and the LTTE. The former thought it was too much power to share, while the Tigers deemed it too little. A large section of the Sinhala polity, including the leftist-nationalist Janatha Vimukthi Peramuna (JVP) which led an armed insurrection opposing it, saw the Accord and the consequent legislation as an imprint of Indian intervention.

Though signed by the powerful President Jayawardene, it was widely perceived as an imposition by a neighbour wielding hegemonic influence. The Tamil polity, especially its dominant nationalist strain, does not find the 13th Amendment sufficient in its ambit or substance. However, some including the Tamil National Alliance (TNA) — which chiefly represented the Tamils of the north and east in Parliament in the post-war era until its setback in the recent polls — see it as an important starting point, something to build upon.

Till date, the 13th Amendment represents the only constitutional provision on the settlement of the long-pending Tamil question. In addition to assuring a measure of devolution, it is considered part of the few significant gains since the 1980s, in the face of growing Sinhala-Buddhist majoritarianism from the time Sri Lanka became independent in 1948.

From influential Cabinet ministers in the current government to state ministers, including a former naval officer who has been assigned the Provincial Councils & Local Government portfolio, many have openly called for the abolition of provincial councils after the new government took charge.

They deem the councils “white elephants”, and argue that in a small country the provinces could be effectively controlled by the Centre. The opposition camp also includes those fundamentally opposed to sharing any political power with the Tamil minority.

All the same, all political camps that vehemently oppose the system have themselves contested in provincial council elections. The councils have over time also helped national parties strengthen their grassroots presence and organisational structures.

Neither President Gotabaya Rajapaksa nor Prime Minister Mahinda Rajapaksa has commented on the Amendment so far. During Mr. Mahinda Rajapaksa’s two terms as President, for a decade from 2005, he gave several assurances to implement the 13th Amendment and go even beyond its provisions, popularly referred to as his promise of “13 plus”. The conduct of the historic Northern Provincial Election in 2013 was a welcome step, but his government was reluctant to part with land and police powers.

New Delhi’s scepticism about past assurances is also no secret — the U.S. Embassy cables accessed by The Hindu through WikiLeaks in 2011 affirmed this. Prime Minister Narendra Modi has referenced the Amendment more than once, especially during high-level bilateral visits, but observers in Sri Lanka wonder how far India can go on the Tamil question, amid growing geopolitical insecurities.