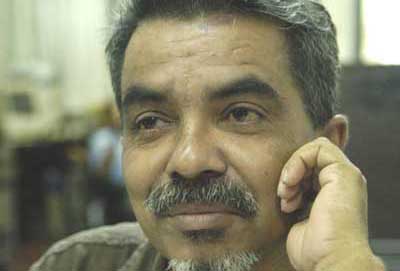 I had never met Prageeth Ekneligoda.
But after he disappeared, on 24th Jan. 2010, I read some of his articles.

I found them to be thought provoking and cover many issues related to freedom of expression, human rights in general, democracy etc. But what struck me most was some of his cartoons. I was first shown the cartoons at his house, by his wife Sandya, just a few days after he had disappeared.


Amongst the cartoons that made a lasting impression on me was one that showed about ten men abusing a single woman. It was titled “if the will of the majority identifies as democracy”. I found it very powerful in it’s meaning and simple to understand. Subsequently, I had regularly used this cartoon in making presentations and conducting trainings, on issues related to minority rights and majority – minority relations in a democracy. It had always proved to be provocative, from international audiences to teenaged students. It also caused shock when I identified the author as being amongst those who had disappeared in Sri Lanka. Another of Prageeth’s cartoon that I used frequently was one titled “if we lose our voice, there will be no voice even to claim our voice”.

He had also drawn a cartoon depicting the 20 year old sentence given to journalist Tissainayagam, citing Tissa as an example of media that fulfilled the “sacred duty of providing an eyesight”. Tissa became free after several years in prison, due to a sustained campaign by his wife, friends, colleagues and international pressure. But when he drew that cartoon, perhaps Prageeth may never have thought that a worse fate was in store for him. Despite an equally determined and courageous campaign by Prageeth’s wife Sandya with support of other concerned individuals and groups, there is still no news of Prageeth, nearly three years after he had disappeared.
When Sandya asked me to write an article to a book she hopes to publish on Prageeth, I thought such a book would not be complete without at least one article about Sandya’s own struggle to find Prageeth, and more broadly against disappearances and for democracy and human rights. Given also my close association with Sandya, I therefore thought I will write more about Sandya than Prageeth.

I first met Sandya Ekneligoda, a few days after Prageeth’s disappearance. It was a time she was trying to get as much help as possible from various individuals and organizations in her struggle to find Prageeth. She was in touch with those she already knew and those who knew Prageeth – but she was also approaching others like me that didn’t know him or her. After that first encounter, we met often. I together with some colleagues tried to do our best to support her in her search. At that time in 2010, I was working at LST and soon, Sandya became a regular visitor there, with consent and full support of Mrs. Wickremesekera, the then Director, and warm friendship and support offered by most staff at LST. It was a time families of those disappeared, detained, killed, victims of torture and those living in fear of their lives – Sinhalese, Muslims and Tamils – frequented LST along with local and international activists, journalists, researchers, diplomats, clergy, young lawyers etc. Sandya was always happy to talk to most of these people whenever she bumped into them – not just about Prageeth’s disappearance and her struggle, but about anyone else’s problems and broader human rights issues. Despite the importance and desperate urgency of her struggle to find her husband and weariness of going to so many placed using public transport, she was always patient and ready to wait till I finished talking to others or even when I was late.
Soon, Sandya became more than someone I and my colleagues and friends were trying to help. She became an inspiration and friend to me and many others. Like many other women I had met whose husband’s, children, relatives had disappeared, Sandya showed exceptional determination to pursue her simple, but dangerous and difficult quest of finding her husband.

Immediately after the disappearance, she had made complaints at several Police stations and later, at the National Human Rights Commission. This itself was no easy task as it sounds, given the hostility these institutions displayed towards her and their reluctance to accept and act on the complaints. Later she filed a habeas corpus case in Appeal Courts. She wrote to the President and as a wife and mother, wrote to the President’s wife, appealing for the first lady’s interventions to help find Prageeth. She stood outside the parliament with her teenaged son and distributed appeals to parliamentarians. She and her son also went to the Galle Literary Festival and distributed appeals to the writers and others gathered there. She took the initiative in organizing numerous protests and vigils in Colombo. She worked with Prageeth’s friends and concerned people to publish two books with his articles and two editions of a book with his cartoons.

As she continued her battle to find her husband, she also showed increasing concern about problems faced by Tamils, especially in the North. She showed a keen interest to visit the North and meet families of disappeared persons there. My friends in North had heard about her and were keen to meet her and host her when I asked them about a possibility for her to visit. After her first visit to Mannar and Vanni, she told me that she wanted to work more closely with families of disappeared people she had met there. Infact, her visit inspired families of disappeared persons, church leaders and civil society in Mannar to organize a public event highlighting disappearances for the first time after several years, on international human rights day, braving intimidation from the military. Sandya went back to Mannar for the event, which also displayed cartoons of Prageeth. Subsequently, several families of disappeared persons from North also came to Colombo to join vigil, protests, religious services etc. Sandya also personally went to distribute invitations for events related to Prageeth and she also took a lot of effort to talk to the few sympathetic journalists individually about developments (and often lack of!) in Prageeth’s case.

In addition to all these local efforts, Sandya also sought help of the international community to find Prageeth. She made formal complaints to various UN mechanisms that Sri Lankan government has agreed to be part of. She submitted a personal appeal to the UN Secretary General and met the UN’s Resident Representative in Colombo to have over this appeal. She went to USA and also visited Europe several times to talk about Prageeth and disappearances in Sri Lanka. Her testimony in Geneva during the sessions of the UN Human Rights Council in March 2012 led to her being intimidated, abused and ridiculed – in Geneva and even inside a Sri Lankan court, by a Deputy Solicitor General at the Attorney General’s Department. Her “crime” was that her efforts at trying to find her husband was bringing the country into disrepute!

When Mr. Mohan Peiris, the head of Government’s delegation to the UN Committee Against Torture claimed that Prageeth was living abroad, Sandya wrote to the Committee to make further inquiries. Domestically, she launched a determined campaign to get Mr. Peiris to testify in Court of Law in Sri Lanka. Despite resistance by high level authorities, Sandya’s persistence led to Mr. Peiris being summoned to courts to disclose what he knew. But the much anticipated testimony proved to be an anti climax, as Mr. Peiris simply retracted his statement to the UN Committee Against Torture and said he doesn’t know where Prageeth is! Earlier this month, in a move that was widely condemned, Mr. Peiris was appointed by the President as the Chief Justice, after the previous Chief Justice was impeached in an unconstitutional manner.

Cartoonist Rights Network International based in the USA gave a special commendation to Sandya for “her persistent pressure brought to bear on the Sri Lankan government to account for the disappearance of her cartoonist husband” at an award ceremony in the USA.

On 24th January 2013, it will be 3 years since Prageeth disappeared. But ideas that he dedicated his life to, lives on – through his personal memory to those who knew him, and through his articles and cartoons which have been published, to those like me who were not fortunate to know him. And hopefully, another publication will further spread his thinking.

Often, I wondered what I can tell Sandya and her sons. I’m sure there is a lot of pain they are keeping inside. Often, I felt helpless and powerless – feeling that nothing I or my friends, Sandya’s and Prageeth’s friends and human rights defenders are doing will help find Prageeth. But Sandya never asked for sympathy, she only sought to discuss practical things we could do, and often would share and suggest new ideas she had in mind. Even when she used to visit me during the three months I was stuck at home with a broken leg. During the many times that I was exhausted, mentally and physically, frustrated at lack of results despite numerous efforts, Sandya’s calls, emails and meetings encouraged me to do more.

So in the last three years, I became part of her life – at vigils, protests, religious events, during court hearings, seminars, helping prepare her submissions, speeches, letters to local and international bodies etc. Indeed, it seemed to me that her life itself seemed to have been centered on her search for Prageeth. And others who had disappeared and for democracy and human rights in Sri Lanka. Her determination and perseverance has at times made me ashamed at my own limits and weaknesses, but she continues to amaze and inspire me. She also faced specific challenges due to her being a woman. Despite all these challenges, Sandya continues her search for Prageeth and also supports and encourages other families of disappeared person in their struggles. I believe no person who believes in and works for human rights can refuse to be part of Sandya’s journey and struggle.
(Revised and updated version of a Sinhalese article by the author written for a book to be published on Prageeth Ekneligoda)
Courtesy – DBS