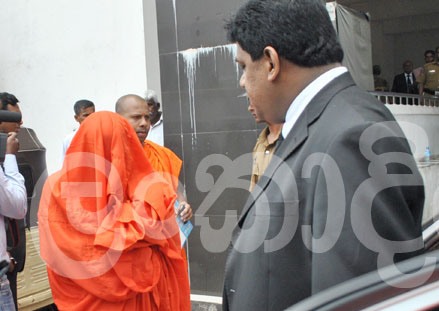 Under the criminal procedure code of SL , no settlements can be made by consent between the parties pertaining to unlawful assembly and mob attacks on civilians causing damage and loss to property . If the loss exceeds Rs. one lakh from such attacks , there is no law in SL under which a settlement between the parties can be arrived at.
Yet , the Gangodawila Magistrate performed a miracle in relation to the mob attack comprising the Bodhu Bala Sena (BBS) and their goons who were taken into custody following the organized attack on the Pepiliyana Fashion Bug establishment on the 25th Thursday , causing grievous hurt to its Manager (still hospitalized) , a media personnel, the police and in addition causing damage to the establishment entailing losses to the tune of many lakhs , when he released the suspects- three Sangha hoodlums and 14 civilians on the ground that both parties to the dispute have come to a settlement .
Mind you this historic , illegal and most reprehensible decision had been taken based on the pressures directly exerted by the President of the country , Mahinda Rajapakse ,of all people! Towards this decision taking , war crime suspect Gotabaya Rajapakse ,
The story reported to Lanka e news thus far …..
PC Faizer Mustafa who went and met the Fashion Bug owner the day following the attack , had in the midst of the discussion told , he wished to phone the President , the highest in the hierarchy of the marauding regime. He had used his mobile phone and spoken in a manner so that those around could hear. MaRa the despot who was at the other end had then spoken to the Fashion Bug owner on the mobile phone. After speaking softly first , he has threatened the owner, ‘ there are shops of yours around the whole country , aren’t there? You want to continue with your business ? then don’t allow this issue to snowball , resolve it calmly.’ MaRa has then also threatened them not to produce the CCTV camera footage of the incident. As this mobile phone sound was kept at the maximum , those around also could hear the discussions and unlawful threats posed by a lawfully elected President of the country.
From the very inception , when the BBS was trying to falsely claim that this hooliganism was not committed by them , and that they have evidence to substantiate it , the despotic MR and the war crime suspect Gota took initiatives to suppress this incident. With this in view , despite there being ample evidence to incriminate the culprits , by bringing in the notorious DIG Anura Senanayake from outside , and with a team of police officers the investigations were rigged to suit their own dastardly ends. The 17 so called suspects were not those apprehended by the police , rather they were those produced by the BBS according to their whims on instructions from Gota in order to camouflage the entire criminal scenario.
Though the majority of the victims of the assault who sustained serious injuries were Sinhalese , and they flocked to the courts to express their disapproval against an amicable settlement ,but because of the threats and intimidations posed by the CID groups and the White van government criminals who congregated at the court premises warning the victims against opening their mouths in court , they remained silent . In some instances even their homes had been visited and they had been warned that if they do not consent to a settlement , they would have to face serious problems in the future, according to reports.
The Rajapakses deprived the victims of solace from courts as well as the Muslim leaders by force and coercion . Are the owners of Fashion Bug going to yield to the pressures of the Rajapakses and consent to the settlement , or is the Fashion Bug that suffered from this wanton attack going to wait until all its other business centers are also devastated ? The owners of the establishment finally agreed for a settlement.
When this case was taken up for trial this morning , the Gangodawila chief Magistrate Ajith M Masanga said , this is a not a case where a settlement between the parties can be allowed legally, and put it off until afternoon. But , due to pressures brought to bear on him later by the SL Chief thief justice Mohan Peiris , the magistrate court was overturned into a Kangaroo court of MaRa . The chief Magistrate acting under the illegal pressures, without waiting until afternoon called up the case again within an hour , and released the 17 suspects on illegal grounds. The 17 suspects released were :
No matter what , the Gangodawila Magistrate who gave this illegal verdict forgetting the law however did not forget the Bana preaching . He preached to the Sangha members and the hoodlums that he being a Buddhist must advise them , based on Buddhist tenets , that without creating social conflicts , they must unite and teach what is good and how to eschew evil to the people. He also emphasized that the followers of Lard Buddha should follow in his footsteps. Perhaps, this is the first time a layman had to preach Buddhism to monks.
While the victims are still in hospitals taking treatment and legally an amicable settlement cannot be arrived at for such an offence under the law, and this is a case that has to be heard by the High court and not the Magistrate court, yet by intervention of the Country’s President directly threatening the complainants ; AG exerting pressures on the judge ; and the verdict being changed flagrantly , blatantly and brazenly unlawfully , only go to illustrate sadly, it is not justice that is being dispensed in this country , but it is its travesty by the grouping together of all those who should be exalting and ensuring the implementation of laws duly.