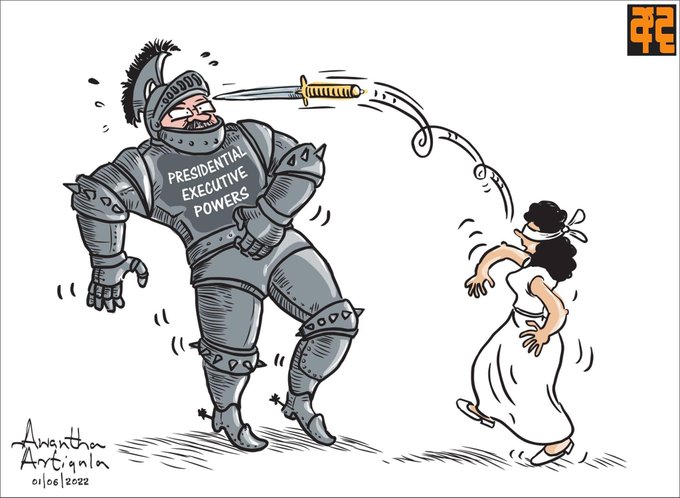 The Supreme Court today issued an Interim Order directing the CID to place Duminda Silva under the custody of prisons with immediate effect.

The Attorney General was directed to assist the CID to implement this interim order while reporting to court the progress of the implementation of the Interim Order.

In a historical order, the Supreme Court issued an Interim Order suspending the operation of the Presidential Pardon granted by the President to former parliamentarian Duminda Silva.

This order will be effective until the final determination of the three Fundamental Rights petitions.

The Supreme Court granted leave to proceed with three Fundamental Rights petitions in terms of Article 12(1) of the constitution.

The court fixed the petitions to be taken up for argument on September 1. The Supreme Court further issued an interim order to examine records and documents relating to the presidential pardon granted to Duminda Silva.

Former Parliamentarian Hirunika Premachandra, her mother Sumana Premachandra and former Commissioner of Human Rights Commission of Sri Lanka (HRCSL) Ghazali Hussain had filed these petitions seeking a declaration that the presidential pardon of Duminda Silva is invalid in law. The petitioners are seeking a declaration that their Fundamental Rights guaranteed under Articles 10, 11, 12 and 12(1) of the Constitution have been violated by the respondents.

The Petitioners state that on or about 24th of June, 2021 it was widely published in the media that Duminda Silva had received a presidential pardon. The Petitioner states that they verily believe that the other convicts in the said case are still serving their sentences. They further said to the best of their knowledge the President has not explained and set out the basis of the said pardon.

They further alleged that the President has not explained the procedure for the said pardon in terms of Article 34.

On September 8, 2016, five accused including former Defence Ministry Monitoring MP Duminda Silva were sentenced to death by Colombo High Court for committing the murder of four persons including former MP Bharatha Lakshman Premachandra on or around October 8, 2011. On October 11, 2018, Supreme Court five-judge-bench headed by then Chief Justice Priyasath Dep unanimously decided to dismiss appeal petitions filed by former MP Duminda Silva and two others who challenged the judgment of Colombo High Court that found them guilty for conspiring to murder four persons including former MP Bharatha Lakshman Premachandra.