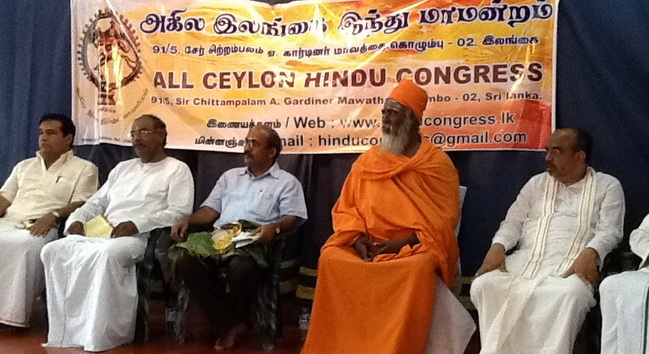 [ACHC – A file photo]
The All Ceylon Hindu Congress has sent the following letter with reference to news item that appeared in the newspapers and websites: We have been receiving enquiries in respect of news reports and website news of what have been said by “All Ceylon Hindu Federation”.

We are unaware of existence or commencement of any organization by the name “All Ceylon Hindu Federation”. We have no connection whatsoever with them. It is improper for them to seek to act as the voice of the Hindus.

All Ceylon Hindu Congress has not only been functioning as the Federation of Hindu Religious Associations and Temple Trusts in Sri Lanka since 1955, but also as the umbrella organization and as the voice of the Hindus of this Country.

This organization (“All Ceylon Hindu Federation”) has also levelled unwarranted false allegations such as “Bishop of Mannar is converting Thiruketheeswaram Sivapoomi into a Christian Poomi” against the Bishop of Mannar who has always been raising his voice for Tamil people. We condemn those allegations.

We also wish to point out that the Hindus need not join Bodu Bala Sena to protect Hinduism.