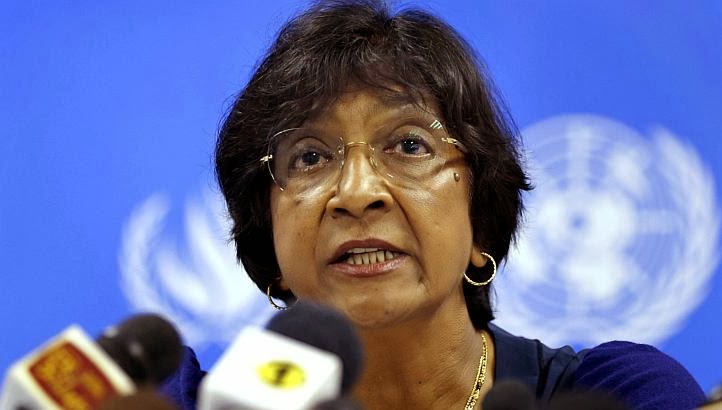 A damning 20-page report from United Nations Human Rights High Commissioner Navi Pillay became the subject of close scrutiny by the UPFA Government this week.  Pillay’s office urged the Government, as is the practice, to respond to the contents of this 74-point report — the precursor to the United States backed latest resolution on Sri Lanka next month — within a week. The External Affairs Ministry (EAM), which co-ordinated the point by point answers converting it to a formal document kept to the deadline which was last Wednesday (February 12).
It was sent to Ravinatha Ariyasinha, Sri Lanka’s Permanent Representative at the United Nations in Geneva, for onward transmission. The Pillay report too had earlier been channelled through him to the Government in Colombo. It will be made public by the Human Rights Council just days before the 25th sessions which begin on March 3 or in less than two weeks.

This report, a copy of which was seen by the Sunday Times, has made recommendations both to the 25th sessions of the UN Human Rights Council as well as the Government of Sri Lanka. To the UNHRC, it recommends, that it should “establish an international inquiry mechanism to further investigate the alleged violations of international human rights and humanitarian law and monitor any domestic accountability process. OHCHR (Office of the High Commissioner for Human Rights) stands ready to assist such a process.”

Here is what the Pillay report calls upon the Government of Sri Lanka to carry out:

(a) Finalise laws dealing with incitement to hatred, witness and victim protection, the right to information, the criminalization of enforced disappearances, in line with international standards, and revise existing laws to bring them into line with International Human Rights Law;
(b) Repeal of the Prevention of Terrorism Act and lift the regulations promulgated under it which allows for arbitrary detention;
(c) Arrest, prosecute and punish alleged perpetrators of attacks on minority communities, media and human rights defenders, and ensure protection of victims;
(d) Undertake independent and credible criminal and forensic investigations with international assistance into all alleged violations of human rights and humanitarian law, including recently discovered mass graves;
(e) Establish a truth seeking mechanism and national reparations policy in line with international standards as an integral part of a more comprehensive and inclusive approach to transitional justice;
(f) Broaden the scope and tenure of the Commission on Disappearances to encompass cases from all parts of the island and all periods of the history of disappearances. Ensure an effective public information campaign and provide sufficient time to hear and record all petitioners who wish to submit complaints;
(g) Publish the final report of the military courts of inquiry, presidential commission of inquiry 2006 and more recent commissions of inquiry to allow the evidence gathered to be evaluated;
(h) Take further steps in demilitarization, and initiate a meaningful and transparent reduction of the military presence to peacetime levels, which would require a clear timeline for demobilisation, disarmament and disengagement from activities that are meant to be civilian;
(i) Engage civil society and minority community representatives more fully in an inclusive and consultative process to support implementation of the LLRC recommendations;
(j) Implement the LLRC recommendation for a national day of commemoration, allow all citizens their right to hold individual or group commemorations, and hold national consultations on the design of appropriate memorialisation for the victims of the war;
(k) Give positive consideration to the offers of technical assistance made by the High Commissioner for Human Rights;
(l) Invite special procedure mandate holders with outstanding requests to visit the country in 2014, particularly the Working group on Enforced and Involuntary Disappearances and the Independent Expert on Minority Issues.

Among other matters, Pillay says that “new evidence — including witness testimony, video and photographic material — continues to emerge on what took place in the final stages of the armed conflict. Human remains also continue to be discovered, for instance in Matale in November 2012 and Mannar in December 2013.” She adds: “As the emblematic cases highlighted above show, national mechanisms have consistently failed to establish the truth and achieve justice. The High Commissioner believes this can no longer be explained as a function of time or technical capacity, but that it is fundamentally a question of political will.

The Secretary-General’s PoE (Panel of Experts) and initiatives by international non-governmental organisations have shown that witnesses are willing to come forward to testify to international inquiry mechanisms which they trust and which can guarantee their protection. For this reason, the High Commissioner remains convinced that an independent, international inquiry would play a positive role in eliciting new information and establishing the truth where domestic inquiry mechanisms have failed. In the absence of a credible national process, she believes the international community has a duty to take further steps which will advance the right to truth for all in Sri Lanka and create further opportunities for justice, accountability and redress.

“The High Commissioner reiterates concern about the continuing trend of attacks on freedom of expression, peaceful assembly and association, particularly against human rights defenders, journalists and families of victims; the rising levels of religious intolerances; and continued militarisation which continues to undermine the environment where accountability and reconciliation can be achieved. She therefore reiterates and updates the recommendations made in her previous report to the Human Rights Council, most of which remain unimplemented.” Diplomatic sources say the Pillay report will form the basis on which the US resolution would be finally worded. That is to make clear that their resolution has been further complemented by the outcome of the UN Human Rights Commissioner’s findings.

One of the important elements in the Human Rights High Commissioner’s report to the Human Rights Council, besides the call for an international inquiry, is that there should be no amnesty for those found guilty of war crimes if a truth seeking mechanism is established. The Government has looked at the South African model for such a purpose and wanted to set up a Truth and Reconciliation Commission.
Sunday Times