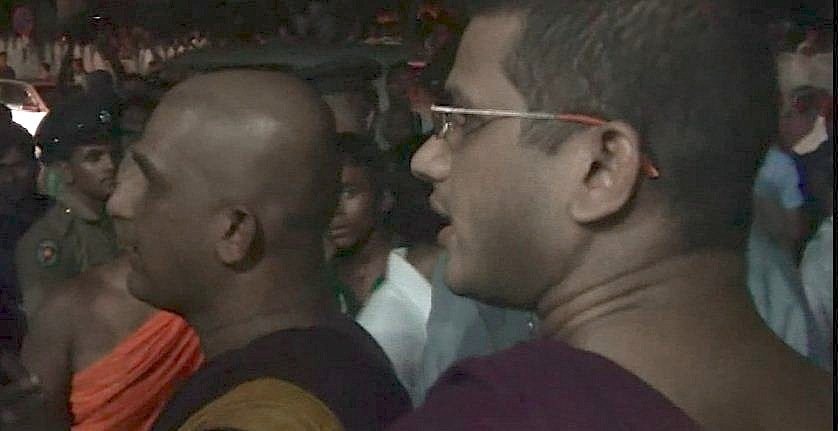 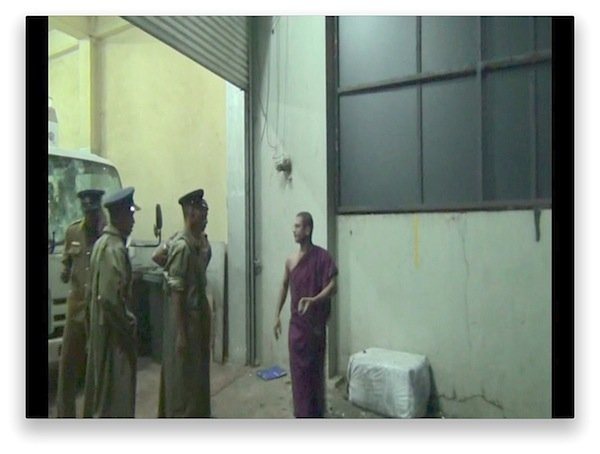 Apparently the infamous Bodu Bala Sena (BBS) has condemned the attack on Fashion Bug warehouse a few days ago and asked the Police to arrest those involved in it, even if they are monks. A Daily Mirror news report suggests BBS thinks the individuals captured on film destroyed private property were actually impostors.

Prima facie, this then begs the question as to why dozens of Police failed to arrest any of these “impostors” on the scene. This is not the first time Police have stood idly by as militant and racist “monks” have gone on the rampage. As we noted on Twitter,

Here are two images to help the Sri Lankan Police in their ostensible investigations into the incident, since it is quite clear that four policemen, no more than 3 feet away from and staring directly into the face of the Buddhist “monk” who is engaged in destroying private property isn’t quite enough these days for an arrest to be made.

See larger image here. And this is a “monk” who emerges from the midst of the crowd and asks brutishly why the mob attack is being filmed. 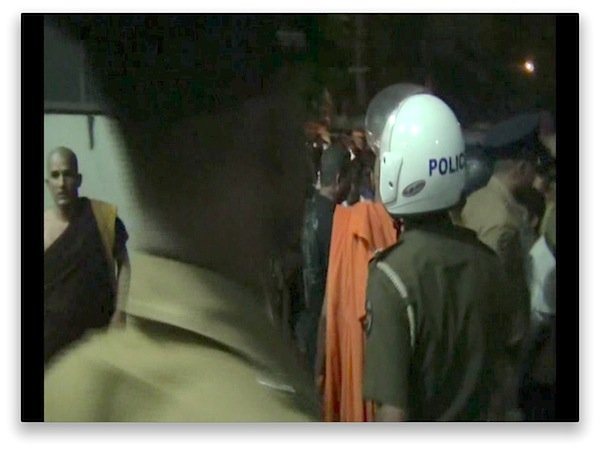 Who are these individuals? Where are they from, and if they are men of cloth, which Temple do they belong to? Why haven’t the Police made any progress in their investigations, given so many of them saw – in close proximity and for a long time – the Buddhist “monks” who were part of the violent mob? Why did the Gotabaya Rajapaksa, Secretary of Defence (openly and unashamedly associated with the BBS) visit the Temple near Fashion Bug on the same night of the attack, after it was conducted, to hold discussions with the Chief Prelate, as reported in the media (see @NavamaniLK tweets here and here)?

The still frame grabs above are from a video shot by Isuru Udayanga of Hiru TV, who got 3 stitches on his head as he was targeted for filming the attack and stoned by the “Buddhist” mob. The full video is embedded below.

As noted by journalist DBS Jeyaraj on his blog,

When the media heard of the attack and rushed to the spot they were obstructed by the hooligans who did not want them to video or photograph the attack. Some tried to grab the cameras from the media personnel and tried to manhandle them. When the media persons broke free after a struggle and went forward they were subjected to a barrage of stones by the mob. At least seven members of the fourth estate were injured in the ensuing struggle and in the stone throwing. “Hiru TV”s Isuru Udayanga had three stitches to his head.

Condoned by the Rajapaksa regime, supported by Police inaction and strengthened by the Defence Secretary’s open association with and support of the BBS, Islamophonia in Sri Lanka shows no signs of abating. 30 years on, we seem, inexorably, to be heading into another July ’83.
Update, 5.10pm: Groundviews was sent the following three images of “monks” in the mob. Note that they are part of a violent mob, with Police present around them. 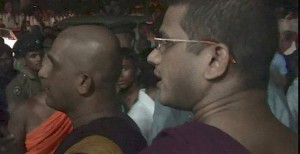 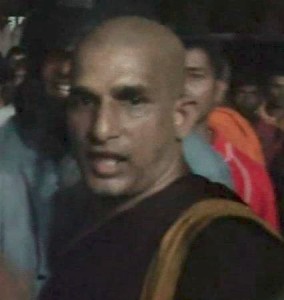 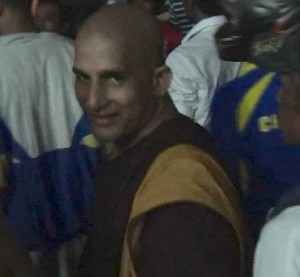