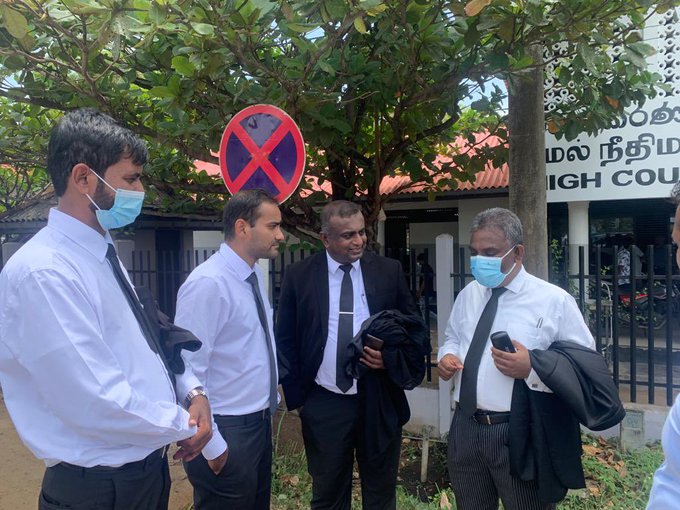 Image: after the case postponed again.

The prosecutors were not available for the trial against Hejaaz Hizbullah for the second consecutive day giving rise to strenuous objections from the defense today .

When the case was taken up before the Puththalam High court today, state counsel Nimesha De Silva told court that prosecutor Lakmini Girihagama was prosecuting a special trial at bar and therefore wasn’t available to conduct trial.

The main witness was currently being cross examined.

My trial was postponed again today. The 3rd time it has been delayed. Obviously very disappointed.

Grateful to my team led by Mr Nalinda Indatissa PC who turn up fully ready everyday.

I also wish thank the @BASLSl for being present to observe my trial. @Justice4Hejaaz pic.twitter.com/TNqzRoxucj

Responding Presidents Counsel Nalinda Indathissa said that they object to the “conduct of the attorney generals department”.

He said that this was the 3rd occasion the case was postponed due to the fault of the prosecution.

He said that on June 10 the trial was postponed because the CID didn’t bring relevant documents. He said that thereafter the case was fixed on consecutive dates in august but the prosecutor requested a postponement and due to professional courtesy the defense did not object.

He said today was specially fixed for the cross examination of the “star witness” and the Attorney general was missing.

He said that with the evidence led thus far it is clear that the case cannot continue but for reasons best known the case is being postponed without being heard .

The state counsel present thereafter told court that she did not have the case file with her . When inquired upon the CID also said that they had not brought their files.

The high court judge recording the submissions ordered the director of the CID to ensure that the files are brought to court and fixed the case for 25th November citing that the state counsel present did not have her briefs.