Head “One Country One Law” PTF, Monk Gnanasara to be charged for hate speech after 12 years! 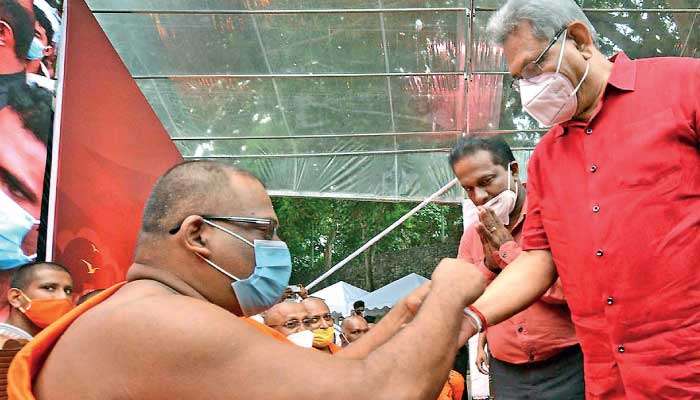 Image: Monk Gnanasara was appointed as Head of President Rajapaksa’s “One Country One Law” Task Force in October 2021.

The Police’s Colombo Crime Prevention Division informed Colombo Fort Chief Magistrate Thilina Gamage on 31 May  that the Attorney General  has instructed to file charges under Section 291A of the Penal Code against Bodu Bala Sena General Secretary Ven. Galagodaaththe Gnanasara Thera, for allegedly using words that are harmful to religious sentiments.

The Crime Prevention Division had initiated an investigation against Ven. Gnanasara Thera for allegedly expressing insulting statements about the Quran to the media on 12 April 2014.

In July 2014 The Director General of Muslim Affairs made a submission to the Colombo Fort Magistrate Thilina Gamage that Gnanasara’s comments on Kuran contained derogatory comments. The excerpts of the investigation had later been referred for the AG’s advice.

AG department has taken 12 years to come to this decision. It is not clear when this investigation was concluded and why AG’s department took more than a decade to file action on a simple statement.

Shakthika Sathkumara, a award winning writer, was arrested immediately upon a complaint by some Buddhist monks in April 2019 and charged under ICCPR for insulting Buddhism. He was detained for months, without filing a case.

On the contrary Gnanaara was never arrested on the complaints made by various parties when this statement was made. Even last year Gnanasara made a statement saying Allah is the brain behind Easter Sunday Attacks in Sri Lanka.

Despite all his hate speeches against Muslims, President Rajapaksa appointed him as the head of Presidential Task Force on One Country One Law.

Accordingly, the Crime Prevention Division informed the Court that AG Sanjay Rajaratnam PC had instructed to file charges under Section 291A against Gnanasara Thera.

A representative of the AG’s Department appeared for the plaintiff while Attorney-at-Law MP Premnath C. Dolawatte appeared for the defendant. The Chief Magistrate adjourned the case till 14 November.

(With the the inputs from Daily Mirror)