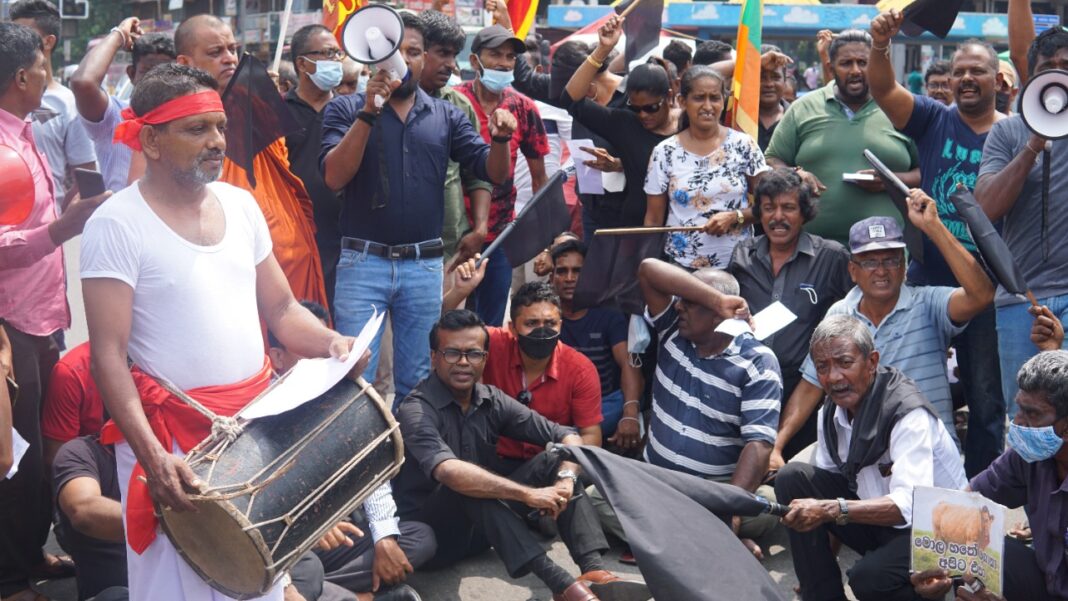 Image: TUs stage a protest as part of the Hartal at Boralla, Colombo on 06th.

Trade unions, which held yesterday’s strike, warned they would launch a continuous strike unless the President and the government resigned immediately.

The country came to a standstill yesterday after employees of government, semi-government and private institutes went on strike.

Shops in all towns were closed in support of the hartal.

Ravi Kumudesh, Convener of the Trade Unions and Mass Organisation, told The Island yesterday, that all regional traders’ associations had supported the hartal.

The staff of the Colombo National Hospital, Lady Ridgeway Hospital, the Castle Street Hospital, and other health institutions, did not take part in the strike, but they held demonstrations during the lunch hour and in the evening.

Private buses as well as trains did not operate. Only some Sri Lanka Transport Board (SLTB) buses were seen on the road.

Workers in Katunayaka, Biyagama, Seethawaka, Kotagala and other Free Trade Zones, too, joined the demonstration.

“Demonstrations were held in all towns. This hartal was even more successful than the 1953 hartal,” Kumudesh said.

National Peoples Power (NPP) Executive Committee member Wasantha Samarasinghe said that they had taken steps to ensure that entrances to the airport and other strategic locations were accessible.

“We could have crippled Ports but we decided not to because we don’t want to hurt exports. But the government gave a holiday to all Port workers,” he said.